Today’s Card of the Day is from the ever popular 1955 Topps set, and it features a man who turned 90 years old today. Dick Hall played for the Pittsburgh Pirates from 1952 until 1959, starting off as a position player before transitioning into a pitcher. He began his pro career in 1951 as an infielder with the Pirates and finished it as an opposing pitcher in the 1971 World Series with the Baltimore Orioles. Our Card of the Day today features his early in his career before he pitched his first game. 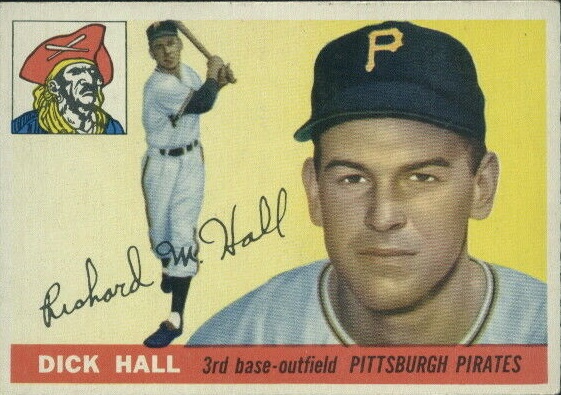 The first thing that stands out to me is his position listing on the front. Hall had three partial seasons with the Pirates at this point and he was mostly a utility player. If you listed his positions in order of appearances from 1952 until 1954, it would read: Center field, left field, right field, second base and third base. I could see if he saw significant time at third base in 1954, then the listing would make some sense. However, he didn’t play the position at all in 1953 or 1954. In fact, he played until 1971 without ever appearing at third base again after just five starts there in his rookie season.

This could just be me, but I think the 1955 set gets overshadowed a bit by the 1956 offering, except when it comes to rookie cards of star players like Roberto Clemente and Harmon Killebrew. The two sets have very similar designs, with a bigger portrait style photo, along with a smaller action shot slightly in the background. The difference is that the 1955 set has a plain background, while the 1956 set has the entire action scene behind the player, giving it more of an actual live action look instead of a posed photo. Obviously those are drawings, not photos on the cards, but they are all based off of real photos.

While I do like the 1956 set better, I will say that it’s not that big of a difference, and the Pirates logo in the top left corner here helps the case of the 1955 Topps set. I’m always a sucker for the older Pirates logos on cards. 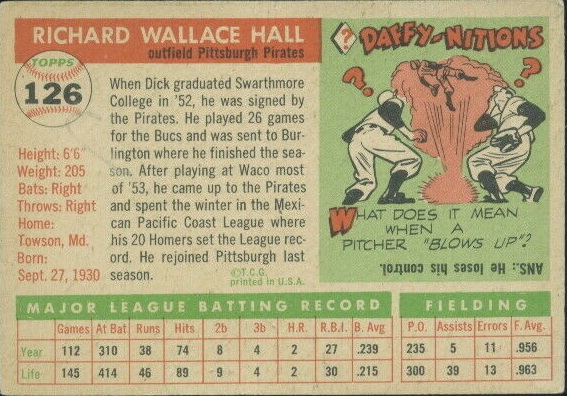 The back of the 1956 Topps cards have a lot going on. They list all of the standard bio information (height, weight, birth date, etc) along with a baseball bio for the player in the middle. They included one year of stats, both hitting and fielding, along with the player’s lifetime totals. With Hall, you can see that he saw a lot more time in 1954 than in his two previous seasons combined.

As you can see on the right, they had baseball cartoons, In this one, a pitcher is on the mound and it appears that the rosin bag was a hidden bomb, which explodes, sending his lifeless body into the air while the other players ignore the natural instinct to be scared and instead they have child-like curiosity over the horror before their eyes. When you read further, you realize that Topps is just asking a question about the baseball term “blow up” in relation to a pitcher, and all that really happened was that he can’t throw strikes.

This card is easily found on Ebay and relatively inexpensive for how old it is now. If you just want one in decent shape, you’ll pay about $6 for a VG/EX example off of Ebay. You can get a nicer (ungraded) one for just a few bucks more. If you like the graded cards, a PSA 7 will set you back about $30-$35, while a PSA 8 is about double that price.