In 1981, Donruss produced their first full set of baseball cards. It included 605 cards and plenty of errors and variations. They also had cards like today’s featured offering, showing a player on a different team than the one that is listed on the card front. The 1981 Donruss Bob Owchinko also features an error/variation on the back, with a corrected version also issued. We are going to look at both of those cards here. 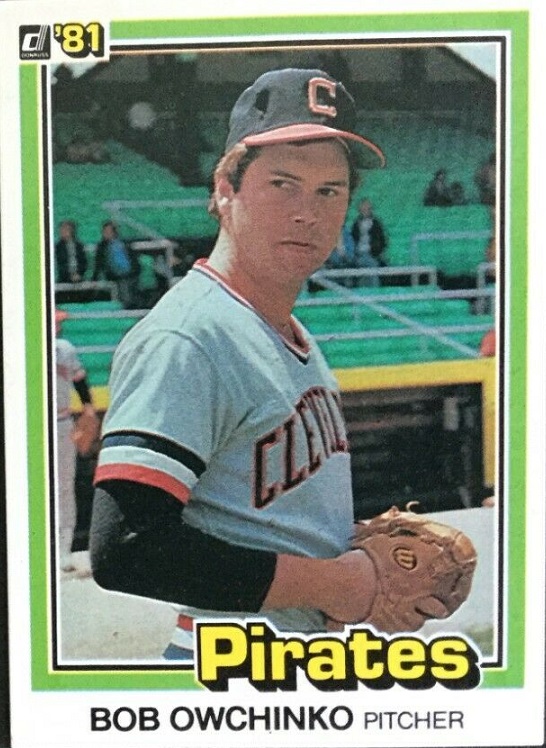 When you look at that front, you might say that you don’t remember that particular Pirates uniform. You especially don’t remember them being in Cleveland in the early 80s. Topps would airbrush cards when they didn’t have the player on his new team. In their first year of producing cards, Donruss just went ahead and used the photo they had and changed the team name, so you would get odd looking examples like you see above.

Here’s the back of the card, showing both variations 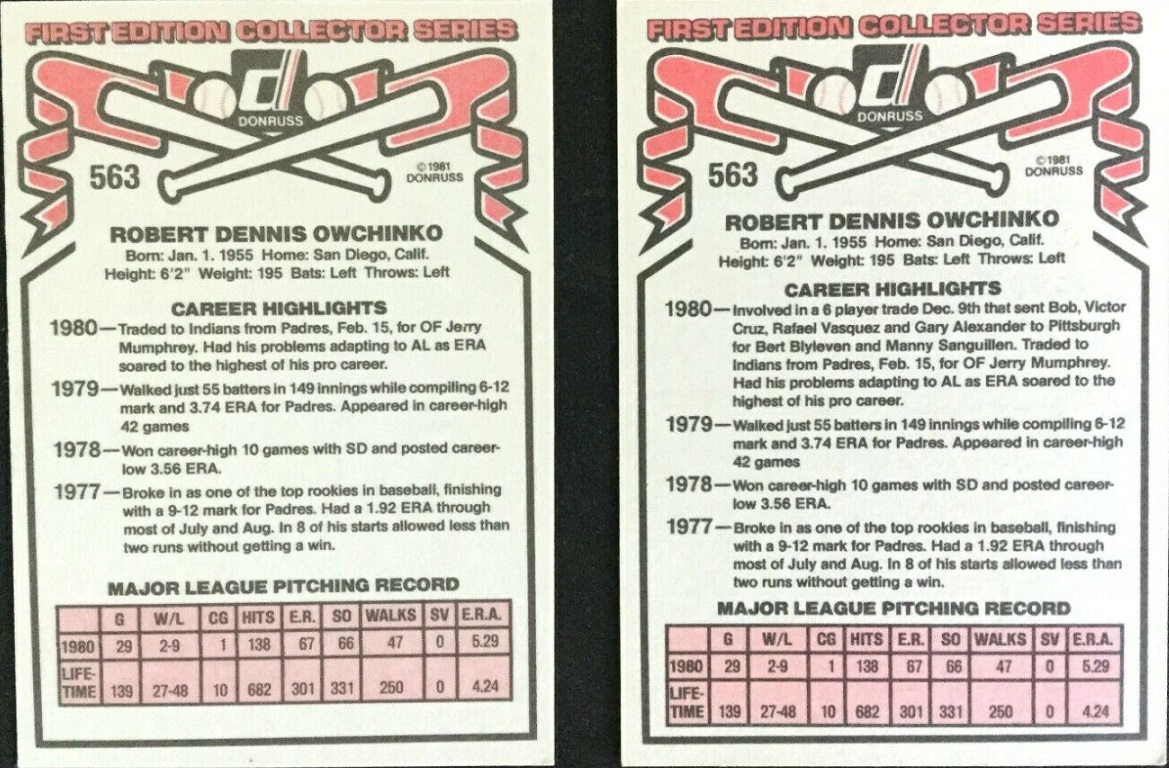 The variation here is in the 1980 section of the career highlights. The card on the left was the first one issued. Owchinko only has cards with “Pirates” listed as his team on the front, so the transaction to get him to Pittsburgh is clearly missing here. As you can see on the card on the right side, the six-player trade that included Bert Blyleven and Manny Sanguillen is now listed. This card is called an error, but to me it’s more of a variation. They obviously aren’t listed his full bio from 1977-79, so they didn’t need to put every single detail from 1980. It helps to have the Pirates trade though, just to better understand the front of the card.

I like the first offering from Donruss because the highlights section was a little different from most previous cards, especially when you see it broken down by year. Other cards have obviously had bios, but usually as one big paragraph. This is a cleaner look and chronological. I usually like seeing the entire career stats listed on the older cards instead of the last year/career, which was used frequently over the years for many different manufacturers. However, doing something different is always noteworthy, especially with the long history of cards.

Owchinko didn’t actually play for the Pirates in 1981. He was traded to the Oakland A’s right before Opening Day. However, he was released by the A’s in 1983 and signed with the Pirates a month later. His MLB time with Pittsburgh consisted of two batters and no outs. He allowed a home run to Andy Van Slyke of the St Louis Cardinals, then gave up a double to Darrell Porter, before being removed. After the season, he was sold to the Cincinnati Reds.

The error/variation card is considered a little tougher and there’s a very small premium on that card. Since Owchinko is a common player from an easy to find set, it’s actually just as easy to find the error for sale. Most people won’t individually list a common card because the shipping usually costs more than the card’s value itself. If you wanted both together, you will pay about $5 delivered. Just the corrected version will be about $2-$3 bucks, with most of that cost in the shipping.