For the 1979 World Series hero celebrating his 78th birthday today, you just knew we had to feature him here in the Card of the Day series. For today’s subject, I decided to go to the 1976 Topps set for the first time, as we take a look at Jim Rooker.

I could have chosen the 1979 Topps here due to the World Series, or the 1980 set, which features a photo from the 1979 season. However, I looked through Rooker’s cards of him with the Pirates and really liked the look of this one. The 1979 card was a close second because it featured a game action photo, so I’m sure you’ll see it in this feature some day. 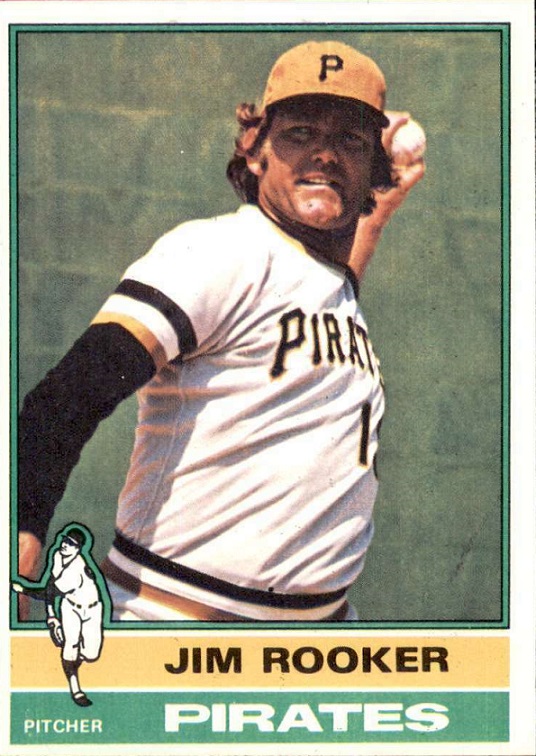 As you can see, Rooker appears to be throwing, possibly before a start. A lot of times back then they featured a player in a pitching pose, but it was clearly on the sidelines and sometimes they didn’t even have a baseball in their hand. He has a bit on intent in his expression, making me think this wasn’t posed.

I like the yellow/green borders here, not usually a color combo that works for me, especially when the black & gold always looks so good. I don’t know why they went green and gold/yellow, but Topps used that combo for all of the Pirates cards. Other teams had different color combos.

One other thing I like here, which was a one-year design, is the little generic player in the bottom corner. Rooker was a lefty, so he has a lefty pitcher. The picture matches the positions, with cool looking designs for the catchers and middle infielders in the set. 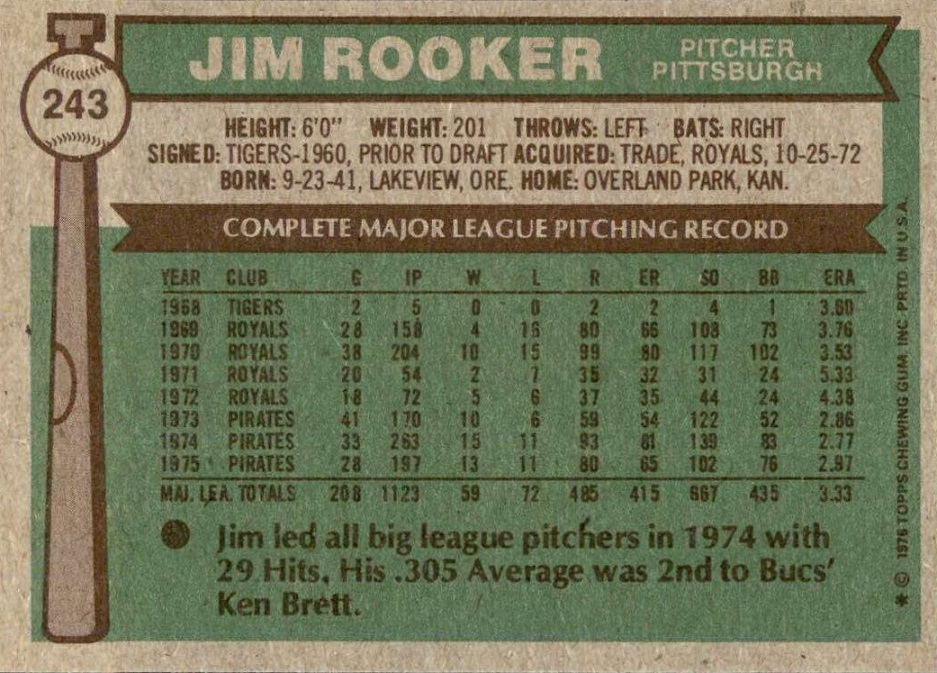 Rooker was in his eighth season in 1975 and the numbers above show that he really took off after joining the Pirates in 1973. Notice the ERA under 3.00 in all three of his seasons in Pittsburgh. Despite seeing his ERA go up to 3.35 in 1976, Rooker had his best win/loss record with the Pirates that year, going 15-8, while falling just short of 200 innings pitched.

The Pirates were getting strong results from him on the mound, so the added fun fact at the bottom of the card threw a curve by mentioning how well he hit during the 1974 season. What it fails to mention is that he put up a .232 OPS in 1975, so it was really just this one magical season for him at the plate. He was a career .201 hitter, which is good for a pitcher. Rooker had seven career homers, with four of them coming during his first full season in the majors.

If you have collected old cards and looked at the stats on the back, you know that the 1976 set is tough on the old peepers, especially if a player has been around for some time. The dark green/brown combo for the background/numbers makes the stats hard to read. I found a clear photo and enlarged it, so this particular example doesn’t help prove my point. Trust me, Topps probably had a contract with eye doctors, because they helped make them rich.

This card is a common and the 1976 set is easy to find. If you want to add an example to your collection, you can get a nice one delivered to your door for a total cost of around $2. If you want to go for a high grade (graded) example, you can find a few PSA 9 cards on Ebay, with the cheapest one going for $22 including the shipping.