Today’s Card of the Day features another card that I just picked up. Whenever we have guest submission articles, I ask them to share a story of how/why they acquired the card. So I’m going to do that here myself, because it ties into the price of the card, which is always how I end one of these articles. Today’s featured card is a 1961 Post Roberto Clemente. It was put out by Post Cereal on the sides of boxes, so it was hand-cut, likely by the original owner. I’ll get more into that in the price section below. 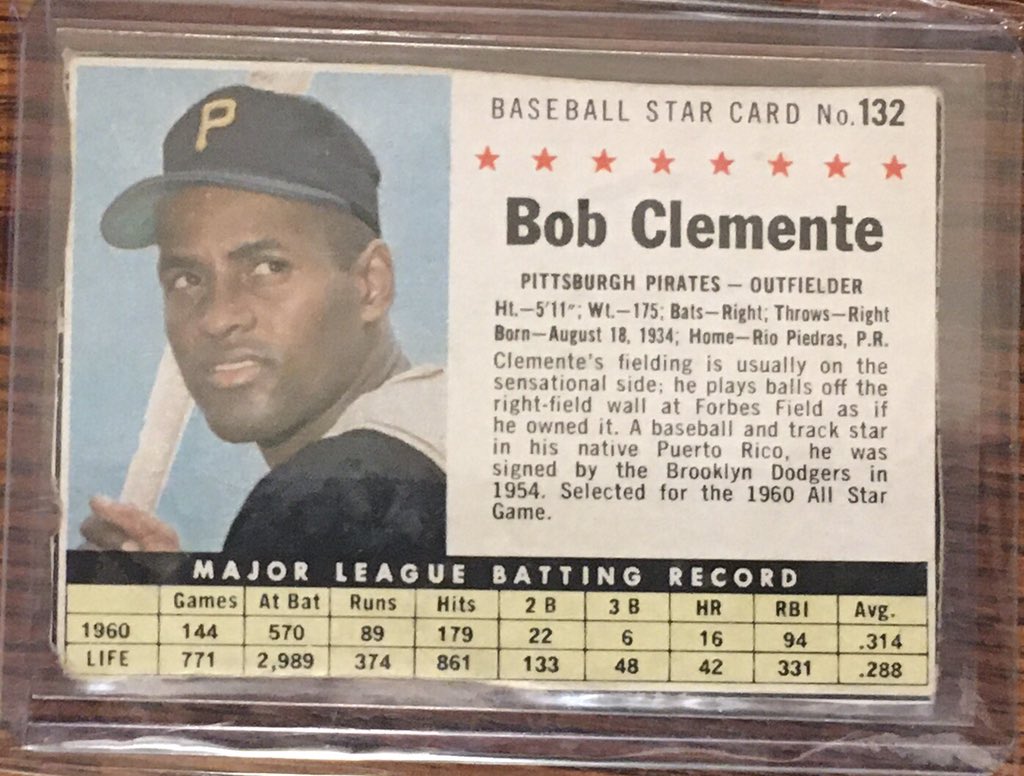 As you can see by the front of this card, Post included a photo of the player, a nice little bio, and one year of stats, to go along with the career stats. Roberto was called “Bob”, which happened often in the middle of his career on cards, in the media, etc. He didn’t like it, but it was still how his name was often written. The 1961 Post set had some odd choices for names. Sometimes they went by nicknames, which this Clemente one can be considered. Other times they shortened names, such as Tommy Davis is Tom, which I’ve never heard for him. Hall of Famer Nellie Fox is called Nelson on his card. If I saw Nelson Fox on the checklist before I actually saw the card, I’m sure I would have had to think about who that was on the card.

So anyway, here’s the not so interesting story of how I got this card.

Ebay gave users with 20+ years on their account a $25 gift to spend. My father started his account in early 2000, so we had just enough time in to get the gift. He didn’t have anything he needed to buy and the coupon had a fast-approaching expiration date, so he told me to use it.

I first looked at minor league sets, trying to put together a package of cards that I could write about in our Prospect Throwback articles. I came close with one, but the shipping charge was outrageous. Still would have been a good deal due to the coupon, but I didn’t feel right paying the high shipping cost.

Next up was some player lots, mainly looking to see what I could get for Willie Stargell. Nothing caught my eye, mostly because I have a lot of his cards already. So then I found someone with a large selection of old Pirates cards and free shipping on purchases. The $25 coupon only covered item cost, not shipping, so free shipping was ideal. I put together a group of cards that included Stargell, Clemente and Dick Groat. I wanted to include a Bill Mazeroski card, but my dad gave me the coupon, and as a small New York Yankees fan in 1960, he has hated Mazeroski for 60 years. So I decided not to go there.

I got all the way to the checkout section, was about to click purchase, and then decided that I wasn’t 100% happy with my selection. I wasn’t getting the exact Stargell card I wanted and it felt like I forced the cards to fit the coupon. So I left all of the items in my cart and decided to look around more.

Not long ago, I wrote up our first Card of the Day covering Post cards, looking at the 1961 Vinegar Bend Mizell card. I mentioned in that article that Clemente was in the set, so I decided to look at those before committing to buy something else.

I first found a few 1962 Post Clementes that I really liked and went back-and-forth before settling on one. Literally got right to the final button to commit to purchase again and I decided that I didn’t really know if the price was good, so I checked completed items for prices. I found out that the 1962 Post Clemente is very easy to find, and similar condition examples to the particular card I settled on were selling for less in auctions, as opposed to buy it now options. It felt like another case of making my purchase fit the coupon.

I then checked completed auctions for 1961 Clementes to see how they did and found out that they were much more difficult to find, probably 1/10th of what was available for the 1962 card. I checked buy it now options and found a nice looking one for $28.49 with free shipping, which was nicer than ones that had $35-$40 price tags and no free shipping. I finally committed to one card.

So the card you see above cost me a grand total of $3.49. It was probably an hour long process from start to finish, but I couldn’t be happier with my final selection. The best part is that I was sold originally on the 1962 Clemente, but the 1961 card has the exact same photo, and they were just a bit different on the colors on the card, and the placement of the photo itself.

As I said, you can find this card on Ebay and get a decent one for about $40 delivered. Most of the cards were cut poorly by kids years ago, so don’t expect to find a great cut without paying for the precision. If you find a rare great cut, you will pay for it ($200+ and that “+” could be a lot more).

I hope you enjoyed the story of my indecision, which led to a great decision.