Today’s Card of the Day is one of my own, which I bought back in June after writing about pitcher Bob Klinger on his birthday. While pulling a scan to use for a Twitter post, I saw his 1939 Play Ball card and immediately wanted one for myself. So I bought it off of Ebay that day and now it’s featured in our Card of the Day series.

Bob Klinger was solid pitcher for the 1938-43 Pirates, who gave up two years of his MLB career to serve in the Navy during WWII. His best season was the 1943 campaign, so he left baseball at his peak. Chances are with the league watered down the most in 1944-45 due to so many players serving, Klinger would have had some big numbers if he didn’t serve. What’s almost equally as impressive as his service, is the fact that he debuted in the majors shortly before his 30th birthday. He put in nine years and 115 minor league wins before he pitched his first big league game. 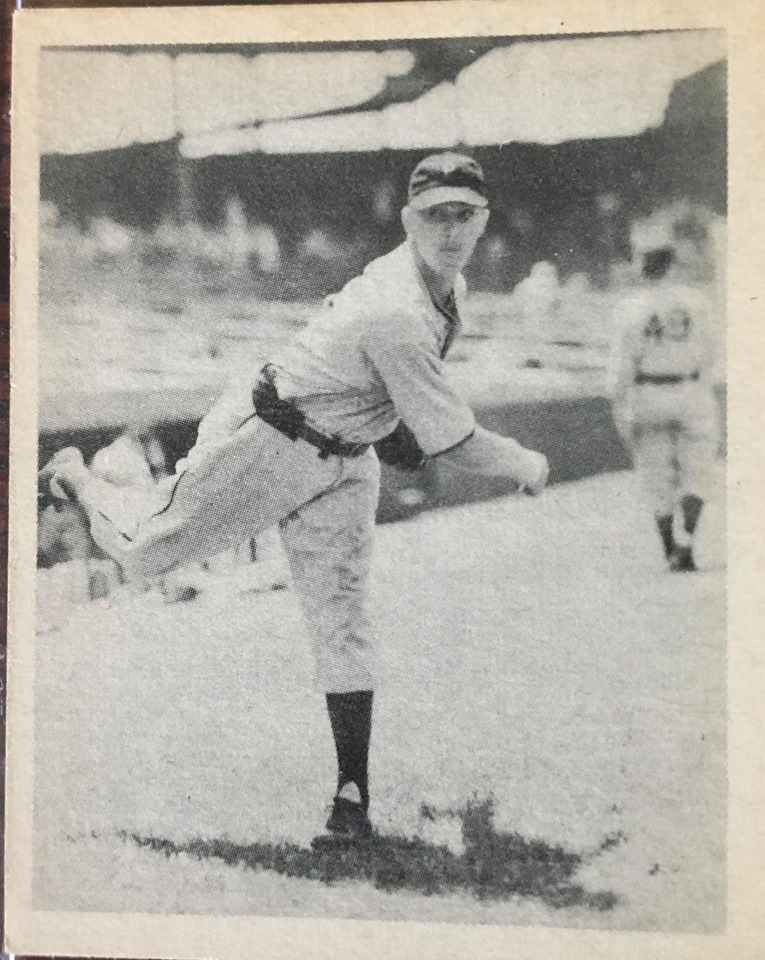 One of the interesting things here is the player walking away from Klinger in the photo. Earlier in the 1930s, you wouldn’t have known who that player was because the Pirates didn’t start wearing numbers until 1932. That big #49 on the back tells you that it was pitcher Ed Brandt in the photo. He wore the number during the 1938 season, which is the only time that this photo could have been taken.

The 1939 Play Ball set was a groundbreaking set in ways. There weren’t many sets issued during this era and many of the previous ones offered drawings of the players, not actual photos. The real photo cards from the 1920s and earlier were smaller in size. These were bigger and better quality photos, featuring many of the top players from that time. That makes the set a popular one with collectors now. The cards had a high production run, so they are relatively easy to find now. 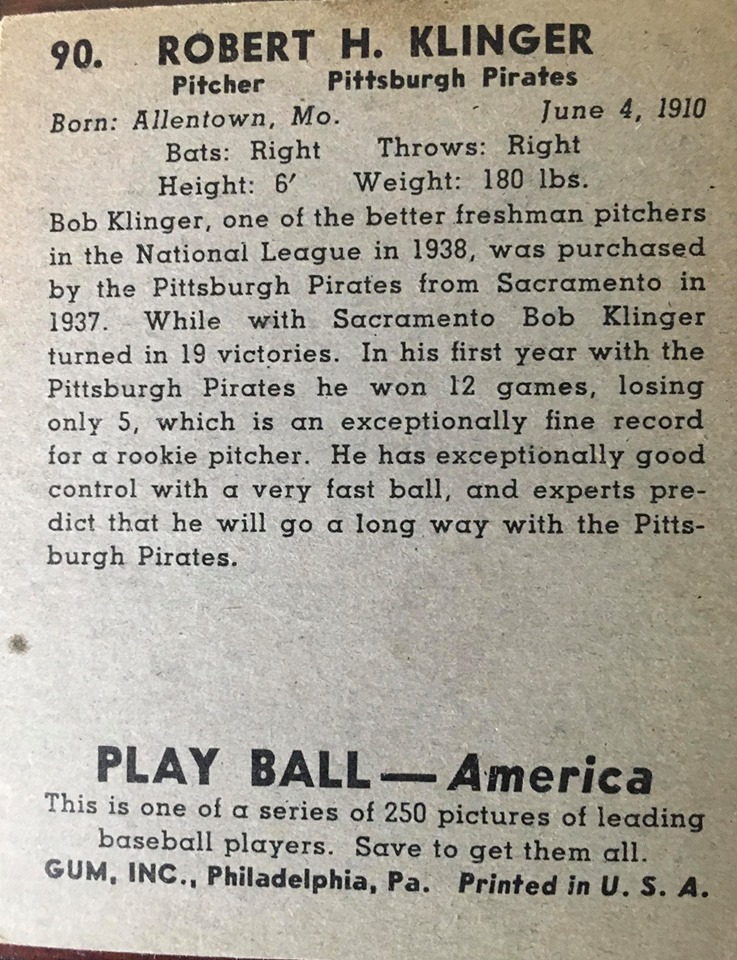 If you notice the birth date on the back of this card, it’s actually off by two years. Klinger was born in 1908. There’s another mistake with numbers. The Play Ball set is complete at 161 cards. In the top left corner, you will see that Klinger is number 90 in the set. If you look at the bottom of the back though, it says that there are 250 cards in the set. The card numbers actually got to 162, but the company skipped number 126, which was likely done intentionally. Companies back then would have ghost cards so people would continue to buy packs to collect the entire set. Assuming it was intentional, it wasn’t the only time that it happened.

The backs of these cards have bios for every player and Klinger has a lot of info, especially for someone who had played just one season in the majors before the cards were released. You can see that he had a 12-5 record, which means that he probably did well. Digging deeper into his stats, you will find a 2.99 ERA in 159.1 innings, confirming that he had quite the 1938 rookie season. Records are better indicators for older players because they completed their own games much more often. However, Russ Bauers from the 1938 Pirates proves that they don’t tell the whole story. His ERA was eight points higher (3.07) than Klinger’s mark, but Bauers had a 13-14 record, while pitching for an 86-64 team. His record proves that he had some bad luck that season.

I wouldn’t be surprised if you had interest in this card. The player is interesting, the photo is great and the old bio puts a nice bow on the entire package. You’ll be happy to know that this is an affordable card for everyone. Mine cost just under $10, including the delivery. You can find them in nice shape right now on Ebay in that same $10-$15 range. There are numerous to choose from, along with some higher grade ones for slightly more.