Earlier today in our This Date in Pittsburgh Pirates History article, we mentioned that pitcher Bob Moose threw a no-hitter on this date in 1969, defeating the New York Mets, just weeks before they won the World Series title. So it seems fitting that we feature Moose here in today’s Card of the Day article. It also makes a ton of sense to use his 1969 Topps card, though the 1970 would have also been acceptable, since it features a photo from 1969. 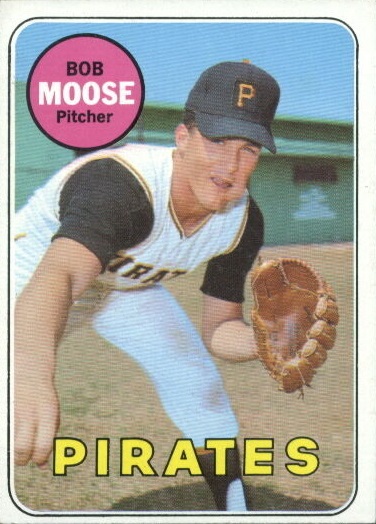 This photo of Moose is probably from Spring Training of 1968, when he was just 20 years old. It’s a typical posed photo from this era, as they really didn’t start using action shots until 1973, where a lot of the cards suffer from low quality photos. All of the Pirates cards in the set had the names in black & white writing, with a pinkish/purple circle that could be on either top side of the card. All of the cards in the set had the team names in yellow block writing at the bottom. The set itself has some player last name variations with either yellow or white coloring, which adds to the fun for any master set collectors. 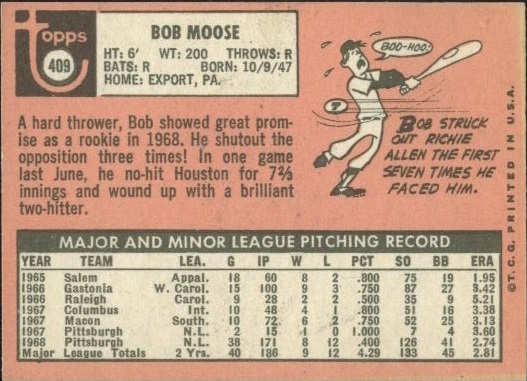 As you can see from the back, Moose wasn’t around long in pro ball before this card was produced. Those are his complete pro stats up to that point. He was signed out of high school in 1965 and he made it to the majors a month before his 20th birthday. He had a great rookie season in the Appalachian League after being drafted, then split the 1966 season between A-ball levels. He was up to Double-A by 1967 and split the minor league season even between Macon and Triple-A Columbus. By September, he was in the majors for good.

What I like most about this card is that it talks about him almost throwing a no-hitter in June of 1968 against the Houston Astros. He came within four outs of pulling off the feat before a Julio Gotay single broke it up. In the ninth, Ron Davis also added a single, but Moose still got the shutout. Gotay was a former Pirates player at the time, while Davis was an outfielder for the 1969 Pirates, sitting on the bench while Moose threw his no-hitter.

Another great thing about this card is the Richie Allen fact on the side. I checked to see if it was correct and the stat is true. What it doesn’t tell you is that Allen broke that string with a seventh inning game-tying home run on July 11th.

This card is readily available on Ebay and it can be had for just a few bucks, including the shipping. If you want a high grade one, you can get a graded PSA 8 for around $20-$30 and a few are currently available on Ebay. Some are priced higher, but check for the lower priced ones, they’re the same condition and much more reasonably priced. There’s also a signed copy for those who have the dinero to purchase something rare. Obviously there aren’t many signed Moose items floating around with his tragic passing 44 years ago on his 29th birthday.