This is a first for this series because George Van Haltren could actually have a two-part article. I just decided to make it all in one. The Pittsburgh Alleghenys had him prior to the 1887 season and traded him away. He spent the 1893 season back in Pittsburgh, but they traded him away again. He went on to do much better than the returns for the Alleghenys/Pirates, putting together a career that deserves major Hall of Fame consideration.

If you don’t know the name George Van Haltren, you should. He started his career as a pitcher, but made his mark as an outfielder. He’s a career .316 hitter in 1,990 games, with 2,544 hits, 1,015 RBIs, 583 stolen bases and 1,642 runs scored. He had 161 triples, which ranks 38th all-time, the same spot where he ranks all-time in runs scored. In stolen bases, he is 21st all-time. That’s coming from someone who had three straight 11+ win seasons (40-31 lifetime) as a pitcher before sticking to the outfield. Once he moved to the outfield, that strong arm helped him pick up the fourth most assists (349) in Major League history. He was on the Alleghenys/Pirates twice for a total of 137 games.

During spring of 1887, the Pittsburgh Alleghenys moved from the American Association to the National League. They had a pitching staff that included future Hall of Famer James “Pud” Galvin, as well as Ed Morris, who put up the two all-time best strikeout seasons in franchise history in 1885-86. Their third pitcher was Jim Handiboe, a rookie in 1886, who went 7-7, 3.32 in 14 starts, with 12 complete games. Van Haltren was considered to be their fourth starter.

On February 17, 1887, the Pittsburgh Post Gazette announced the signing of Van Haltren, the 20-year-old Californian.  The scouting report from team president William Nimick said that Van Haltren had splendid control, strong nerves in the box and excellent velocity. He was excited to know that Van Haltren had only pitched two years, so there was room for him to grow with experience.

There was an interesting story in mid-March about Van Haltren not wanting to join Pittsburgh for Spring Training, along with three different versions of the story being out at the same time. One said that he was drunk at the time he signed his deal and he didn’t think that it should stand. The other said that he was signed at home with his father present and overseeing the signing. The other said that he was in a saloon, but not drinking when he signed, noting that he doesn’t drink. The problem seemed to be that his $1,400 salary for 1887 wasn’t enough and he had better offers, including a $1,600 deal from Detroit. If Van Haltren didn’t report though, he would have remained Pittsburgh property and been blacklisted from baseball.

A month later, there was a report that Van Haltren offered the Alleghenys $250 to release him from his contract and William Nimick balked at the the offer, saying that he needed to report to the team. Just a few days later, Pittsburgh cleared up the issue by trading Van Haltren to the Chicago White Stockings for veteran pitcher Jim McCormick. It was a one-sided deal on paper, with the 30-year-old McCormick having 252 career wins in nine seasons.

It was reported by one paper that the Alleghenys paid Van Haltren a $2,000 bonus to accept the trade and report to Chicago. That could have been a mistake, because it is currently noted as the money went to Chicago in the deal. It appears that the “trade” was actually the two teams mutually agreeing to buy the release of those two pitchers, who were both holding out as the start of the season was getting close. Regardless of where the money went, the Alleghenys wrote a $2,000 check and Chicago got Van Haltren.

The Alleghenys lost the pitching part of the deal, then really got hurt when Chicago decided to make Van Haltren an outfielder. McCormick went 13-23, 4.30 for the 1887 Alleghenys, completing all 36 of his starts. After the season, he demanded a raise and a three-year contract. When Pittsburgh wouldn’t meet his demands, he retired to run a saloon in town. That decision has so far cost the 265-game winner a spot in Cooperstown, but McCormick passed away in 1918, long before the Hall of Fame was even a legitimate idea. 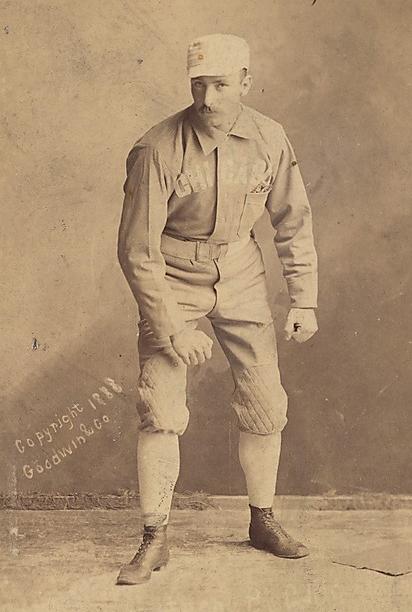 Very late in the 1892 season, Pittsburgh acquired him from the Baltimore Orioles in a deal for young outfielder Joe Kelley. We have already established that getting rid of Van Haltren twice was a bad idea, but they traded a future Hall of Famer to get him back. Kelley was only with the Pirates for 56 games and he had another 15 years ahead of him, which included an outstanding run from 1893 to 1900. That Kelley debacle is best saved for another day. Van Haltren hit .200 in the final 13 games of the 1892 season with the Pirates, but he was already signed for the 1893 season for $2,600 when they acquired him.

At the time of the deal, the Philadelphia Record commented that the Giants made their poorest decision ever, and it was probably the best one ever for Pittsburgh. They were basing it on Van Haltren’s issues in the outfield, where he wasn’t exactly the best fielder. He was fast and had a strong arm, but he was not sure-handed, back in an era where some players just started wearing gloves for the first time and those pieces of stitched leather were nothing like what we know today. The Philadelphia Record was obviously wrong in their assessment of the deal.

The Giants got the much better end of the deal. Van Haltren put up 24.9 WAR over the next eight seasons in New York, which Pittsburgh obviously could have used (Kelley was even better during that time). It’s true that the Pirates won three straight NL titles from 1901-03, Van Haltren’s last three years with the Giants, but during the 1894-1900 seasons when Pittsburgh was winning nothing, he averaged 120 runs scored per season. His lowest run output was 109 in 1894.

So the Alleghenys/Pirates  traded a Hall of Fame worthy player twice, getting a pitcher who lasted one year and went 13-23, along with a total of $500 in cash from the two deals combined. They also had to give up a Hall of Fame outfielder to acquire him the second time. His total output for the Pirates was 137 games. That makes George Van Haltren The One Who Got Away…twice.

As a side note, Van Haltren became a scout for the Pirates, who received praise from owner Barney Dreyfuss for not signing anyone. He was on the team payroll for at least five years, earning his keeping by telling the Pirates not to sign certain players who were recommended to the team. Van Haltren would go see players in California and he talked Dreyfuss out of signing any of them. He broke that string in December of 1910, recommending Walter “Judge” Nagle, who pitched eight games for the 1911 Pirates before they sold him to the Boston Red Sox.

19 Sep 2020
The One Who Got Away
Featured, George Van Haltren