Earlier today in our Game Rewind article, we marked the Major League debut of Hall of Famer Pie Traynor, which happened 100 years ago today. To go along with his big league debut, we also a Card of the Day article featuring his rookie card. Traynor played a total of 24 games during the 1920-21 seasons, then became a regular in the Pittsburgh Pirates lineup in 1922. His first two baseball cards were released during his first full season in the majors. Both featured the same front image, with the only differences being the backs of the cards. The E120 set is more popular, so I chose to feature this particular card today. 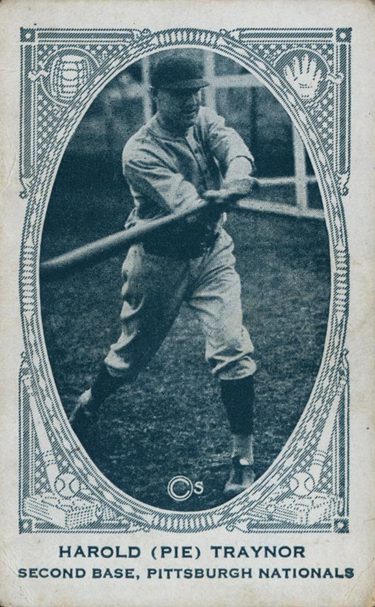 The Pittsburgh Pirates had three different uniforms from 1920 until 1922, so it’s easy to tell the year the picture was taken by looking at the uniform. Well, it should be, but the indicator is the “P” logo on the front top left of the jersey and as you can see by that picture, you can’t see it by that picture. In fact, 14 of the 15 Pirates in the E120 set have the logo obscured due to their pose. Catcher Walter Schmidt is the only one where the logo can be seen and he’s wearing a 1921 uniform. Chances are that Traynor’s photo was also taken in 1921.

Besides the great photo of a young Traynor, the front of this card has a lot going on. The E120 set has blue tint front for National League players and a light brown tint for the American League players. The borders of the photo have some baseball themes, with a bat, baseball, mitt and what appears to be the old style catcher’s mask in the top left corner. The circle around the photo has a design throughout and they also have a checkerboard style theme in the corners. The design really must have took some time, but it doesn’t take anything away from the photo subject, just adds to the card.

The position probably stands out here for Traynor. He was recognized as the greatest third baseman in the first 100 years of baseball and as you read this morning (or you should have), he started as a shortstop. In fact, he never played a big league game at second base, not even one inning. I’m not exactly sure why they put second base for him, but it happened. 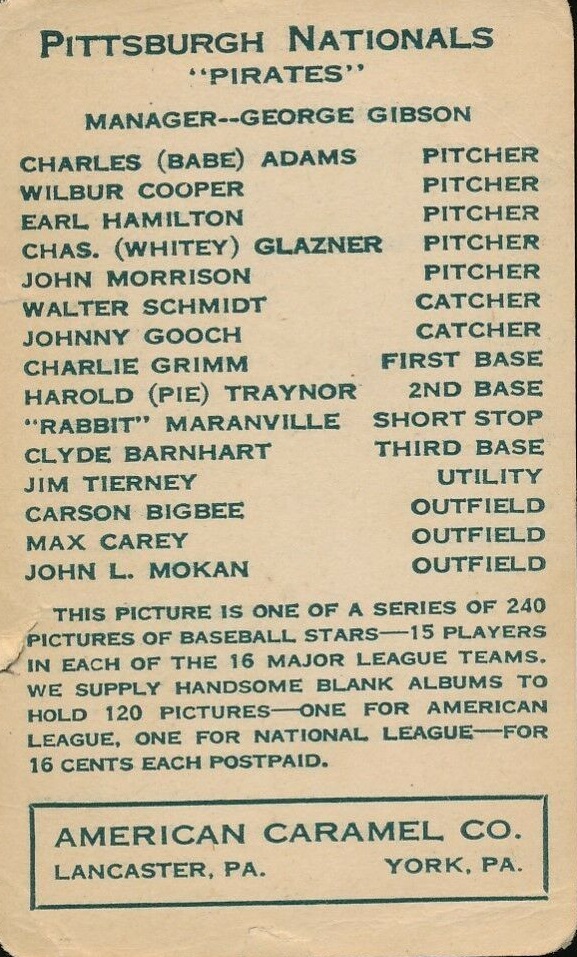 As you can see, the back features the checklist of players for the Pittsburgh “Pirates”. I’m not sure why Pirates is in quotation marks. Team nicknames weren’t official in the early years of the majors, but the name Pirates was well accepted long before this set came out. The team first put the name on their jerseys in 1912, so even if you want to use that as the cutoff point, that was ten years earlier.

Each of the 16 big league teams had 15 players in the E120 set, making it a 240-card set. The Pirates had some pretty good names here with Traynor, Max Carey and Rabbit Maranville all making the Hall of Fame. You also have Babe Adams and Wilbur Cooper, two of the better pitchers in team history, as well as Carson Bigbee and Clyde Barnhart, who was long-time Pirates. The back includes some nicknames, with “Rabbit” likely being in parenthesis due to the length of his name, as all of the other nickname players have their first name also listed. One that threw me on this list was Jim Tierney. He is known in current day circles as Cotton Tierney, and I knew his first name was James, but it didn’t click right away when I saw it on the back because I’ve never thought of him as “Jim”.

You can see that these cards were produced by the American Caramel Company, which put out many sets during the early part of the 20th century. They were a somewhat local company for the Pirates, with two factories in Pennsylvania.

If you wanted to add this card to your collection, it’s going to cost you some green. Being the rookie card of a Hall of Famer, it’s a very popular card with old collectors. The demand outweighs the supply. A PSA 3 sold for $331, while a PSA 4 received a similar price a year earlier. Those sales happened in 2015-16, so the price has increased since then. Now a poor conditioned one (graded 1) can reach those same prices.  They have made a reprint set, so you can get that for a few dollars if the real thing is out of your price range.