On June 1, 1895, the Pittsburgh Pirates visited the Brooklyn Grooms at Eastern Park. The game represented an odd quirk to the 1895 schedule. Teams didn’t play on Sundays back then. The Pirates were in Washington for four days, wrapping up a series on Friday. They traveled to Brooklyn on Saturday for this game, had off Sunday, played the New York Giants on Monday, then Brooklyn again on Tuesday. This game was a one-sided affair in favor of Brooklyn, but it turned out to be a noteworthy event months later.

The Brooklyn Citizen had a simple summary of this contest, along with the boxscore that follows. They said that “Brooklyn wiped the turf with the antagonists from the Smoky City”. 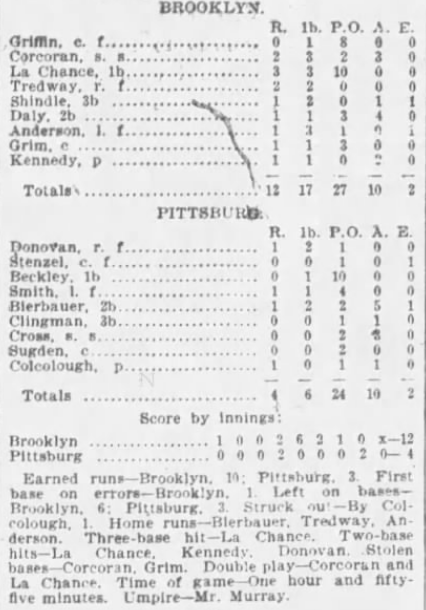 A quick look at the boxscore shows that it was a close game through four inning, before Brooklyn opened it up in the fifth. Pittsburgh had just six hits, but the famed Louis Bierbauer hit his first home run of the season, as inside-the-park shot, which turned out to be the final home run of his career. Pitcher Brickyard Kennedy managed to hold the great Jake Stenzel to no hits, hurting his .360 lifetime average with the Pirates. Pittsburgh pitcher Tom Colcolough allowed all 12 runs over his eight innings of work. This game ended up being his last start for the Pirates, after three seasons with the club. The loss gave the first place Pirates a 22-12 record at the time.

The game took 1:55 to play and the umpire was Miah Murray, a former big league catcher, who was an umpire for just one full season in the majors. He filled in occasionally in three other years, totaling ten games, but the 1895 season was his only one with a big league job. He played a big part in the contest.

The Pirates protested the game because of what happened after a 15-minute rain delay during the third inning. Before the rains came, Pirates outfielder Patsy Donovan was standing at second base with a two-out double. When play was called to resume, Donovan walked across the field and touched third base on his way to second base. Brooklyn center fielder Mike Griffin grabbed the ball and tagged Donovan and then Murray called him out. He claimed that the rules said that players must touch the bases in order, so since he touched third base first, he was out on the play. According to the Pittsburgh Press, Griffin actually produced the official rule book to make his case that Donovan was out.

Pittsburgh manager Connie Mack immediately protested the game, saying that the rule didn’t apply to the situation. The final score would make it seem like a lost cause to complain about one out call, but the score was 1-0 at the time of the incident.

Here’s a clip of the full explanation and the two rules in question. 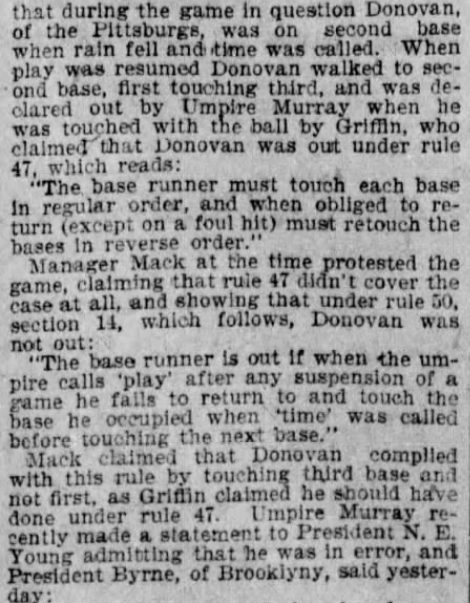 Despite the immediate protest and admission of error by umpire Murray right after the June 1st game ended, it took until August 20th for National League President Nick Young  to officially declare the game a no contest and reschedule a replay of the game. The loss was wiped away from the Pirates record and Brooklyn lost a win.

On August 23rd, the two clubs met again in Brooklyn to replay this game. The original stats still counted except for the win/loss by the teams. As it turned out, Brooklyn won the replay game, and it might surprise you to find out that Murray was once again the umpire for the contest. It was actually a heartbreaking defeat for the Pirates, who lost 7-6 on a two-run walk-off single in the ninth. The team wasn’t playing well at the time, so it was just another loss during a poor finish to the season. Pittsburgh held first place with a 41-27 record on July 17th, and they were 47-30 on July 26th. They finished the year going 24-31 in their final 56 games (one tie included).

One note about the August 23rd open date for the Pirates and Brooklyn. Pittsburgh was already scheduled to play a rained out game from June 27th with the New York Giants that day. That rescheduled game was once again rescheduled as a doubleheader on September 4th.