Today’s Card of the Day looks at left-handed pitcher Denny Neagle, who was part of two big trades in Pittsburgh Pirates history. He is also celebrating his 52nd birthday today.

The 1992 Fleer Ultra set is a nice hidden gem in my mind. When baseball cards started being mass produced, people still ate them up for a few years, not knowing that they wouldn’t be worth much down the line. Now those sets rely on eye appeal to get any attention. There are a few major duds (I’m not a fan of the 1990 Topps at all), but some of them really stand out still to this day. The 1992 Fleer Ultra set had high quality photos on the front and back and they shunned borders around the top and (most of) the sides of the cards. If you know the history of cards, borders were almost always used up to this point, so when you see someone creating something different, it always stands out. It’s not always good to stand out, but I like it here. I also like their logo (see photo below), which isn’t something I’ve said many times for baseball cards from any era. 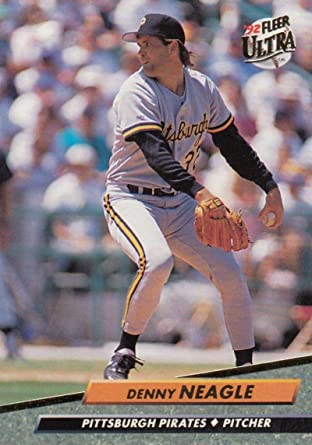 Neagle is shown here wearing jersey #32, which he wore during the 1992-93 seasons. During that 1993 season, he switched to #15 and wore that until he was traded away in 1996 for Jason Schmidt. These cards were produced later in the 1992 season obviously, because they actually have a photo of Neagle on the Pirates. He didn’t join the Pirates until March 17, 1992 in a trade with the Minnesota Twins for John Smiley, who is also in this same set with the Pirates. That was possible because these cards were released in two series of 300 cards each. Smiley is in the first series with the Pirates, while the Neagle card is from the second series (card #556), which was produced and released after the 1992 season started. 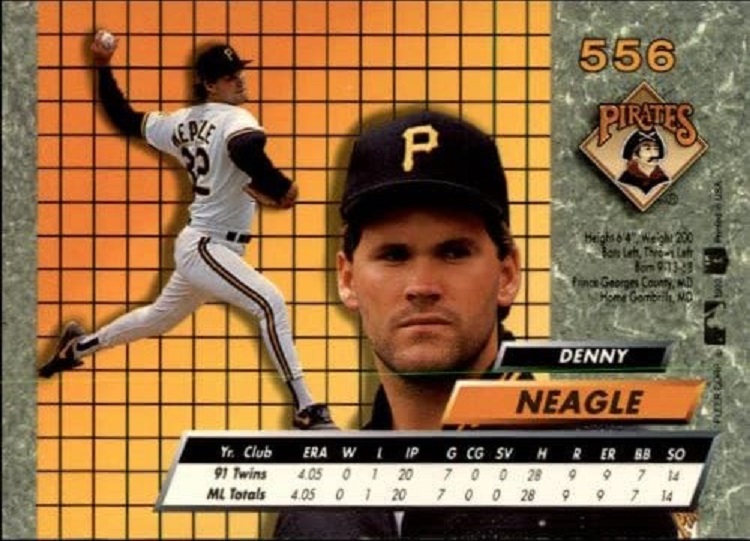 If you’re collecting cards solely for the player pictured on them, then the 1992 Fleer Ultra set has to be a favorite. How many sets actually have better photos on the back of the card than the front? I like when you can see the career stats for players year-by-year, so this back design isn’t perfect for me, although Neagle isn’t the best player to use as an example. He debuted in the majors in 1991, so those are the only stats available. If you looked at the back of a card for someone like Carlton Fisk, who had 22 seasons in at that point, he still had just 1991 stats listed, along with his career total.

The 1992 Fleer Ultra set was all about featuring the player, and you were getting three photos of each player per card. The other part I like about the back here, which will always win me over, is that Pirates logo that they used during this era. That will always get a card some style points.

This is a common card from a low-priced set. It’s actually not an easy card to find being sold individually, and if you’re buying it off-line, you’re paying more for the shipping most times than the card itself. A better suggestion would be the 1992 Fleer Ultra Pirates team set. You can grab all 25 cards for $5 delivered and along with Neagle, you’re getting cards like Barry Bonds, Doug Drabek and Andy Van Slyke, just to name a few.