Today’s Card of the Day features a player who was born 80 years ago today. Jackie Hernandez played three years for the Pittsburgh Pirates, with a .205 average, four homers and no stolen bases in 214 games. He is best known for fielding the final out of the 1971 World Series, taking a grounder off of the bat of Baltimore’s Merv Rettenmund and throwing on to Bob Robertson for the final out. This card is for the National League Championship Series against the San Francisco Giants and it also shows Hernandez in a fielding pose. The Pirates won that best-of-five series 3-1, coming back from a game one loss to win the next three games. As I said, Hernandez is featured front and center on this card, but there’s another surprise off in the distance that makes this a perfect card to be featured as the Card of the Day. 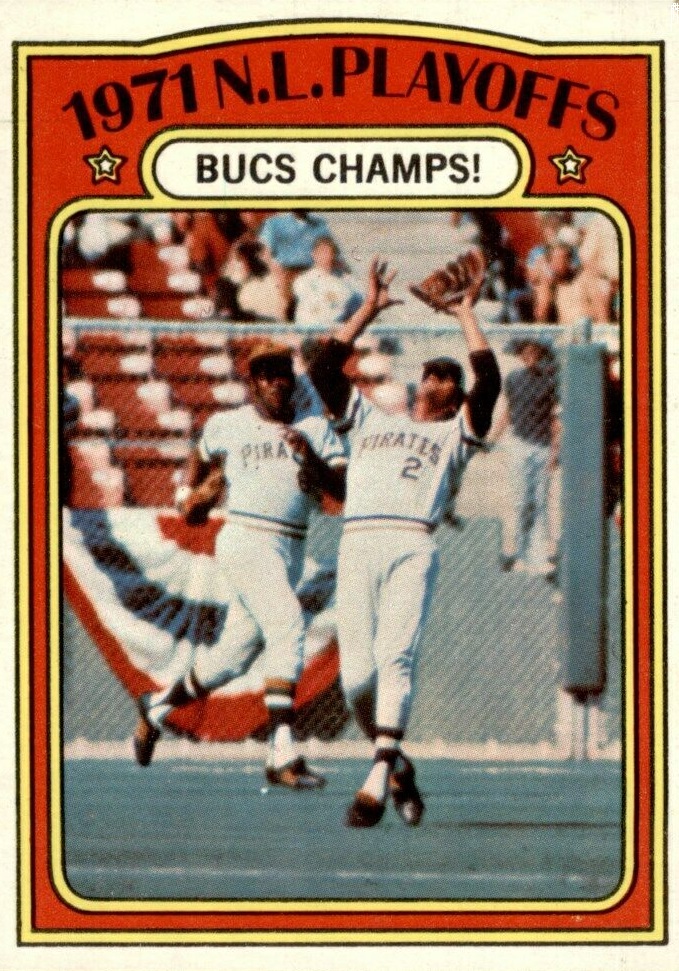 You’ll notice here that Hernandez is behind his normal shortstop position, ranging into shallow left-center for a pop fly. If you look behind him at the player backing up the play, that’s left fielder Willie Stargell.  While Hernandez gets the prime spot on the card, it also doubles as a nice action pose featuring the man they called Pops.

Topps featured one card for the National League and one for the American League for the Championship series. The World Series received eight total cards, one looking at each game and then another for the Pirates celebrating their victory. Together, the ten cards form a subset in the 787-card 1972 Topps set. 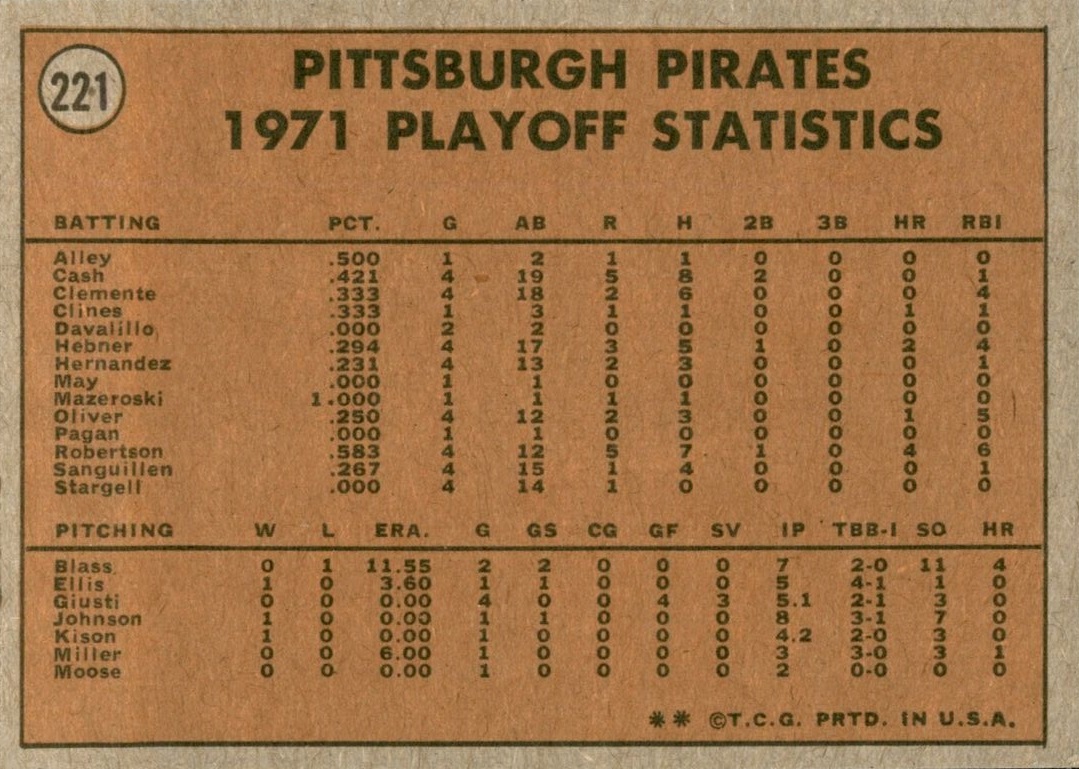 As you can see, the back has the stats for the National League Championship Series against the Giants. Hernandez hit .231 with two runs scored and an RBI. Stargell had a very quiet series, going 0-for-14 with a walk and run scored. That was after setting career highs with 48 homers and 125 RBIs during the regular season. A closer look shows that the back doesn’t actually have complete stats. There are no pitchers listed among the hitters. You’re not missing anything though. The pitchers combined to go 0-for-10. You’ll also notice that Dave Giusti pitched in all four games and Steve Blass started two games, but only lasted seven innings total. You’ll also see that Bob Johnson went eight innings in a start without an earned run. In fact, only Blass and Dock Ellis allowed earned runs in the series.

This is a common card from the 1972 set, which gets a very slight boost because of Stargell in the background. Some people will even mention Stargell in the sales title just to get some extra attention on their card. It’s easily attainable through Ebay and you’ll pay about $3 to $5 delivered. A nice graded example will cost a little more. A PSA 8 (near mint-mint) recently sold for $35 and there’s one available for $35 now as well. However, someone got a nice steal on one last month, paying just $19 for a PSA 8. Occasionally you will find people selling the ten-card postseason subset as one group.