With today being Dots Miller’s birthday, you knew there would be multiple articles. For those who don’t know, Miller was born in Kearny, NJ (same birthplace as me), in 1886, days apart from my great-grandfather, who lived a block away from Miller at one point and two blocks away at another point. Miller’s niece married into my family and six of my relatives are also related to Miller. Basically, I’m going to write about Dots Miller here from time to time.

I have three extremely rare cards of Miller. The total population of the three cards combined might be as low as ten. The three I own are the only three I’ve ever seen. I shared one of them exactly a month ago here, his 1911 Baseball Bats card, which isn’t even on the checklist for the set. The other one will be saved for down the line. Today’s card has something in common with the other two cards. All three cards were found on the side of candy boxes.

Here’s the front of the card (the back is blank) 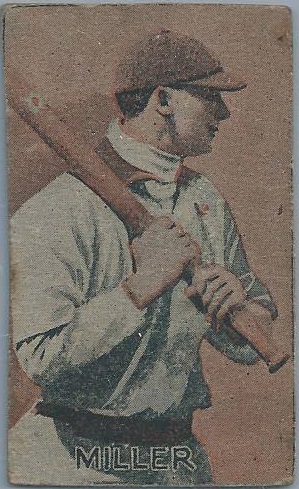 You may wonder why these cards are called “Orange Borders” when the background is clearly orange on the card. If you look in the upper left hand corner and down part of the right side, you’ll notice black lines. If the person who originally cut this card from the box did a better job, you would see a full black line border. Most people who cut the cards did a worse job than this person, but in the opposite direction, so you would see the entire black border line, as well as the orange from the box it was cut from. Giving the set the name “Orange Border”.

Here’s an extremely rare example of an uncut candy box, which was auctioned off in Robert Edward Auctions four years ago: 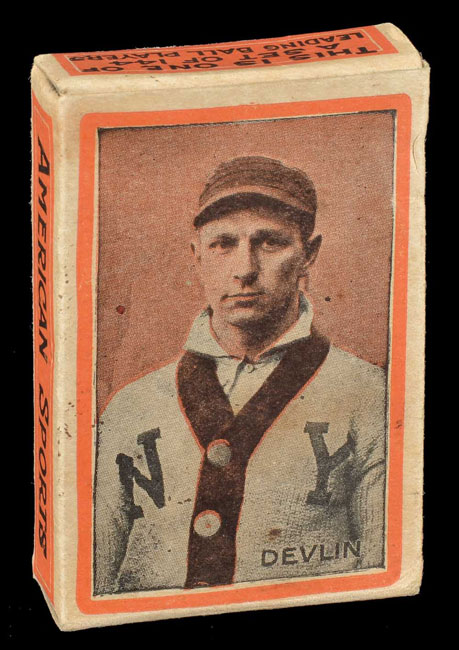 You can imagine why these cards are so rare now. First, they needed to be saved back then, which probably happened only half of the time. They then needed to survive the scissors. They then had to last 110 years to get to current day. These cards had no value at all for half of their life, so a player like Art Devlin or Dots Miller may not have been saved, compared to someone like Honus Wagner, who was still recognizable years later. Finally, if we are being honest, they aren’t the most attractive cards with that dull orange background and orange tint everywhere else. All of those things combined make them highly collectible today. I also have a second card from this set that I’m saving for a rainy day.

Getting back to Miller, the pose on this card was a very popular pose for card makers to use back then. It can be found on a few other cards, including the popular T206 set, which is the most well-known set in vintage cards. Miller had some injury issues in 1910, but he was a popular player at the time because he helped the Pirates to their first World Series title in 1909 by putting up 4.6 WAR as a rookie second baseman.

I usually try to give value for cards in these articles in case people are interested. What I’ll say for this card is that if you see one for sale and you want it, buy it. It’s likely that you won’t see it for sale again.