This is our second guest submission from a gentleman named Howard Chasser, who is a passionate collector of all things Roberto Clemente. His first offering was his story of acquiring a 1955 Topps rookie card of the Great One. Earlier today, our Game Rewind article featured a big game for Clemente from the 1958 season. So this card is a perfect match for today. It’s also the first card from the Kahn’s set that we have featured in our Card of the Day series and it’s extremely rare.

Here’s today’s featured card, followed by Howard Chasser’s tale of how he passed on example, only to regret that decision almost immediately. He tells of how he purchased the example below, as well as how extremely rare it is to find one of these cards. He also uses the term “wiener staining” and it’s completely PG…it’s your mind that will make it not PG. Shame on you. 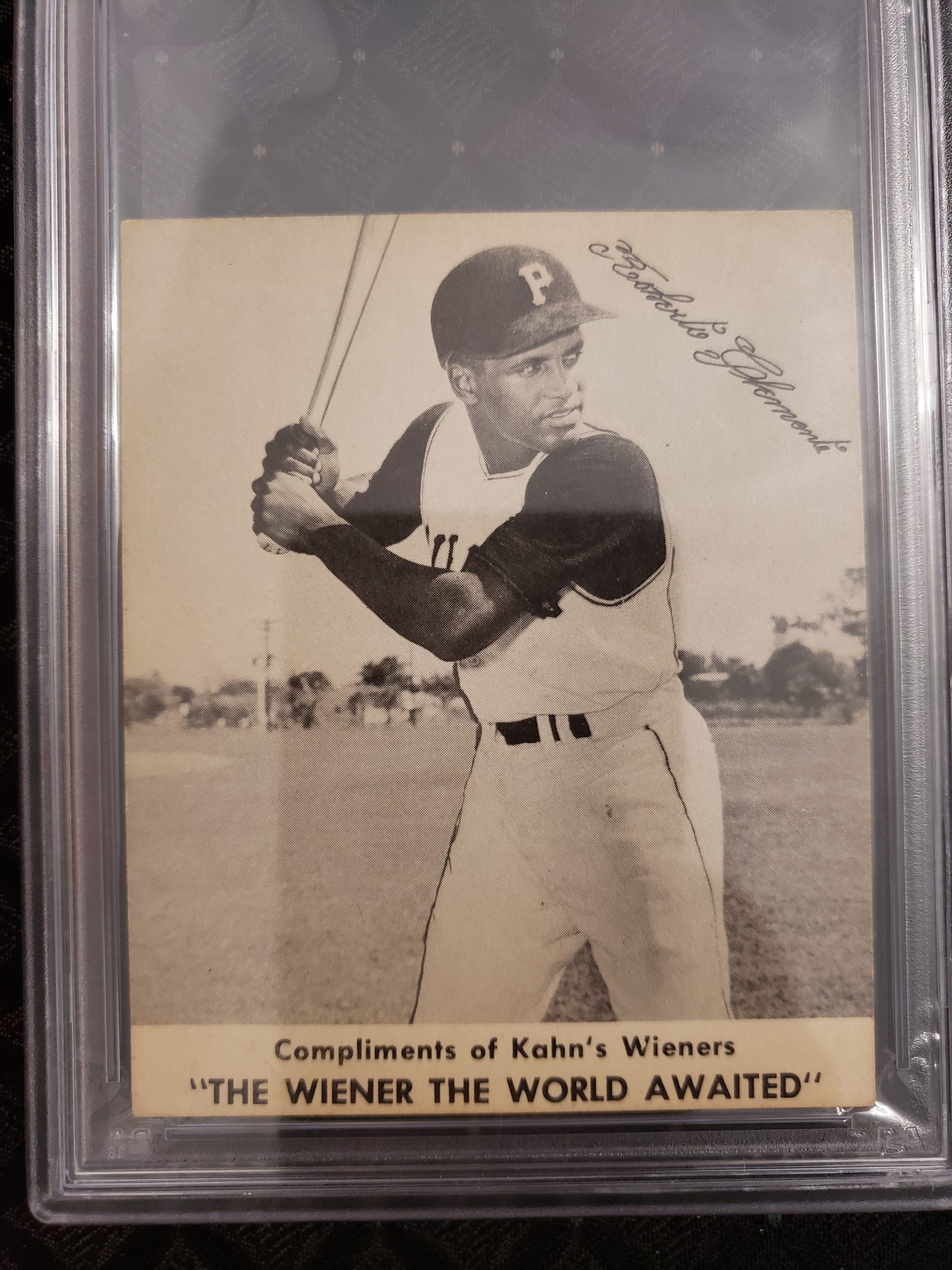 Many outside the Pennsylvania and Ohio region would likely ask what is a “Kahn’s”? Those from the area are very familiar with the well known wiener company. As an inducement to purchase packages of hot dogs, from 1955 through 1969 the company included Baseball, Basketball or Football player cards (mostly from the Ohio and Pennsylvania teams) in their packages. Beginning in 1961 it was possible to purchase cards or sets direct from the company by mail. Finding cards in even mid grade condition from 1955 – 1960 is very difficult. Wiener staining on the cards is quite common. There are also a number of rarities.

Roberto Clemente appears on Kahn’s cards from 1957-1964 and 1966. His cards are the most desirable and expensive in each of the years he is included. The 1964 Kahn’s is the most easily found Clemente. The 1958 is by far the most difficult.

I was at my first show (~1992) at Robert Morris college in Pittsburgh when I saw my first 1958 Kahn’s Clemente. It was offered to me at “book price” of $500. It was in great condition (around excellent). I balked at the price and the cards owner said “If you aren’t willing to pay me that for it, then you have no idea what you are looking at!”. He was spot on. I had no idea what I was looking at, at the time. I was still learning a lot. I can’t tell you how many times I imagined having that decision to make over again.

I was fortunate a few years later to purchase a low grade “1” and picked up a second about a year after that (which quickly sold to another Clemente collector). A few years ago I executed on an opportunity to get a card as nice as the one I had first seen at that Robert Morris show in 1992. It is graded a 5 by a third party grader and is currently one of the jewels of my Clemente collection. There are only a total of nine copies residing in third party grader population reports (I believe at least one may be duplicated). I am aware of the existence of one additional ungraded copy. My 5 is one of two graded 5’s with one 6 graded higher (I believe this is the one that was crossed over but still sits in both population reports).

It is a card that many collectors have never seen and on want lists of Clemente collectors, food issue collectors, Pittsburgh team collectors, and type card collectors. It is by far one of the toughest of all Clemente cards to find. I am unaware of a public sale of the card in my 30 years collecting ( I do know of about five private sales over that time period, including two that I sold). A Google search will return only a single image of the front of the card from a third party graders website.

The card itself is awesome as well. The front features Clemente in a black and white ¾ length batting pose with a facsimile autograph. The back has a feature called “My greatest Thrill in Baseball” – Clemente describes being homesick in 1955 and arranged to have his family flown in to see him play in New York against the Dodgers – he didn’t play till the 7th inning – when he got up to bat he tripled with two men on and tied the game. It was his “thrill” to perform so well with his mother watching from the stands. My recommendation – if you ever see one of these regardless of condition – jump at the chance to own it! A great, tough, early Clemente card! 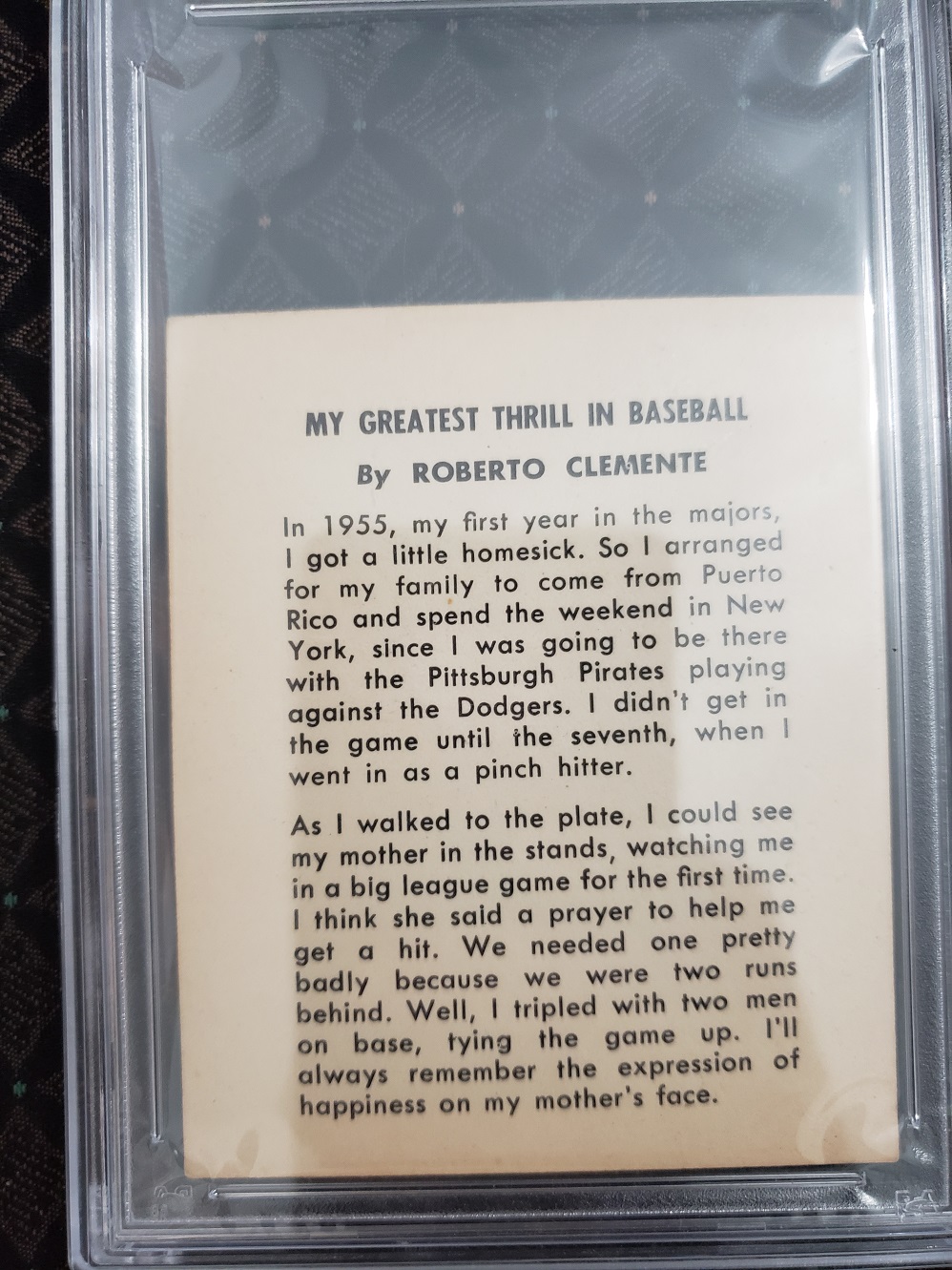