Today’s Card of the Day features Vince DiMaggio, who was born on this date in 1912. He’s a man who gets lost in the shadows of his brother Joe DiMaggio, the Hall of Famer and iconic figure from the New York Yankees. It doesn’t help that his brother Dom was a seven-time All-Star for the Boston Red Sox. Without those relations, maybe he wouldn’t be as famous (in a baseball sense) as he is now, but his own accomplishments tend to get diminished because he was the third brother. Vince, in fact, had a strong career when looking at him as a individual and not the third DiMaggio. He was able to play ten seasons and 1,110 games in the majors, marks not reached by a large percentage of MLB players. He slugged 125 homers, had a 100 RBI season and made two All-Star appearances.

This is our first card from the Play Ball set. As the back (see photos below) indicates, these cards were put out by Gum, Inc. They ran sets for three years and stopped due to the war after this particular set. This is the only one with color, the 1939-40 sets were black and white photos. A total of 72 cards are in the set. 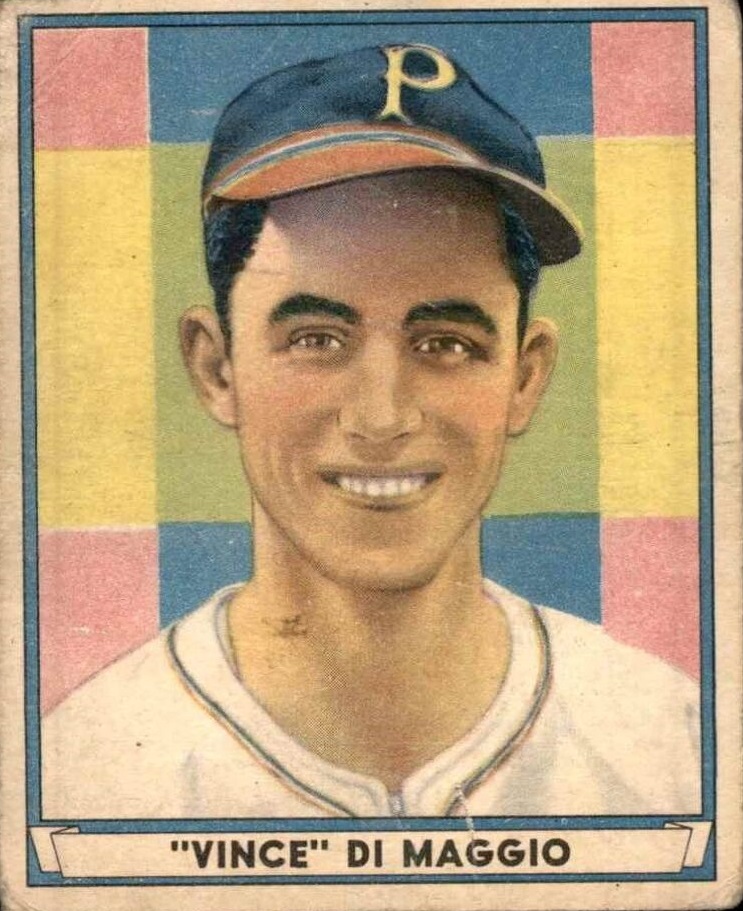 This card definitely has an interesting background. I don’t know what they were thinking with the random color boxes behind him, but it was their first try at adding color and most of the others had a nature landscape behind the players, or a solid color. They just tried something different here. I like how they put quotes around Vince, as if it’s a nickname for something other than Vincent. As you can see, the 1941 photo pre-dated the current color scheme of the Pirates. 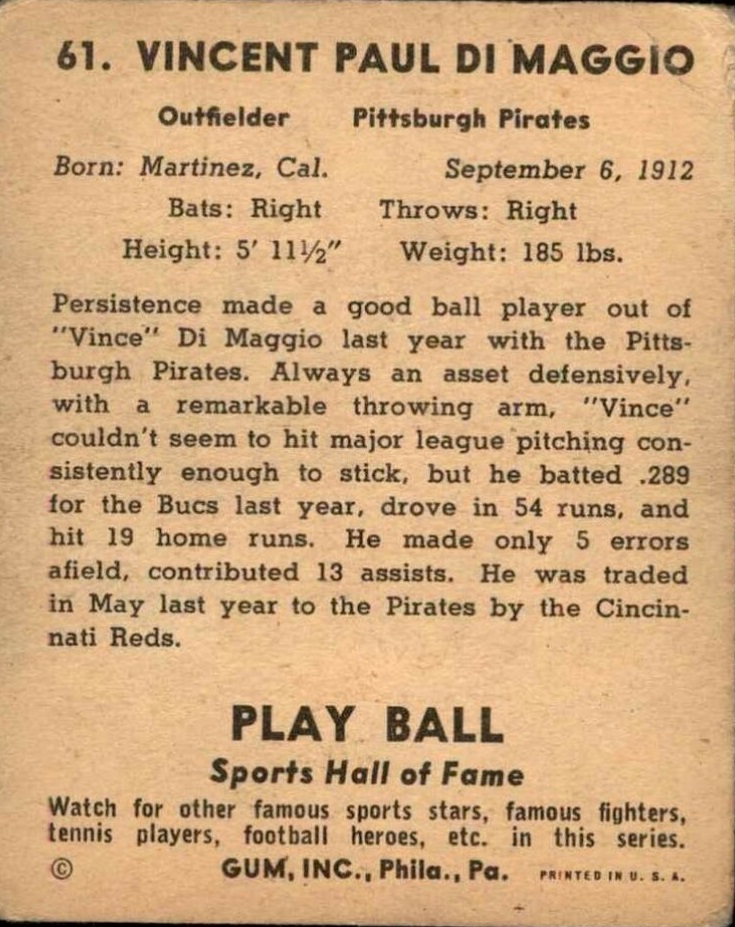 The Play Ball cards didn’t include any stat lines, but they do have a nice little bio on each player. From this particular card, we learn that he was an above average defender with a strong arm. That was true at the time, though he lost some steps later in his career and basically ended as an average fielder when looking at his career as a whole. The part about hitting consistently enough has some truth to it, but not really. He played 282 games during his first two seasons combined, then had a rough 1939 (with only eight games played in the majors), before putting up his big season in 1940 after the trade. The Reds made the World Series in 1939 and 1940, so he didn’t hit enough to play for the best team in the league during his brief time in Cincinnati.

If you’re interested in this card you’re going to be paying quite a bit for a nice one. Right now, the lowest price one on Ebay is almost $100 and it’s not in the best condition. Others have sold for cheaper over the last three months, but you have to be watching for auctions, so patience will help. The highest grade (graded) ones could run into four figures.