Today is the birthday of Hall of Fame second baseman Bill Mazeroski, so of course our Card of the Day is dedicated to the Pittsburgh Pirates star. I have already covered one Mazeroski card here, starting at the top with his 1957 rookie card. Today I wanted to get to a set that we haven’t looked at yet. So I present to you the 1964 Topps Stand-Up Bill Mazeroski.

The stand-up set featured 77 cards, with numerous Hall of Famers and a total of 22 cards that were short-printed, so they are harder to find now. The Hall of Famers who are in the short-printed group have some added value. All of the cards have yellow (top) and green (bottom) backgrounds for the players. The player’s name is listed on the front, as well as his team and position, along with a facsimile autograph. The cards had a perforated line around the top half of the players, then halfway down the line went across horizontally to the borders. When you popped the players top half out, you can then bend the bottom part and the card would stand up on its own, giving you the name “Stand-Up” set.  The wrappers for the packs of cards called them “Stand Ups” so I’m not exactly sure why there current name is both hyphenated and dropped the “s” at the end of “Up”.

These were able to be bought for one cent each in packs, but if you wanted to pick your favorite player from the set, it wasn’t difficult to see the names through the wrapper. A full box came with 120 packs. If you have one of these, I’ll gladly pay you double the originally price.

Here’s the front of the card (the back is blank and gray in color): 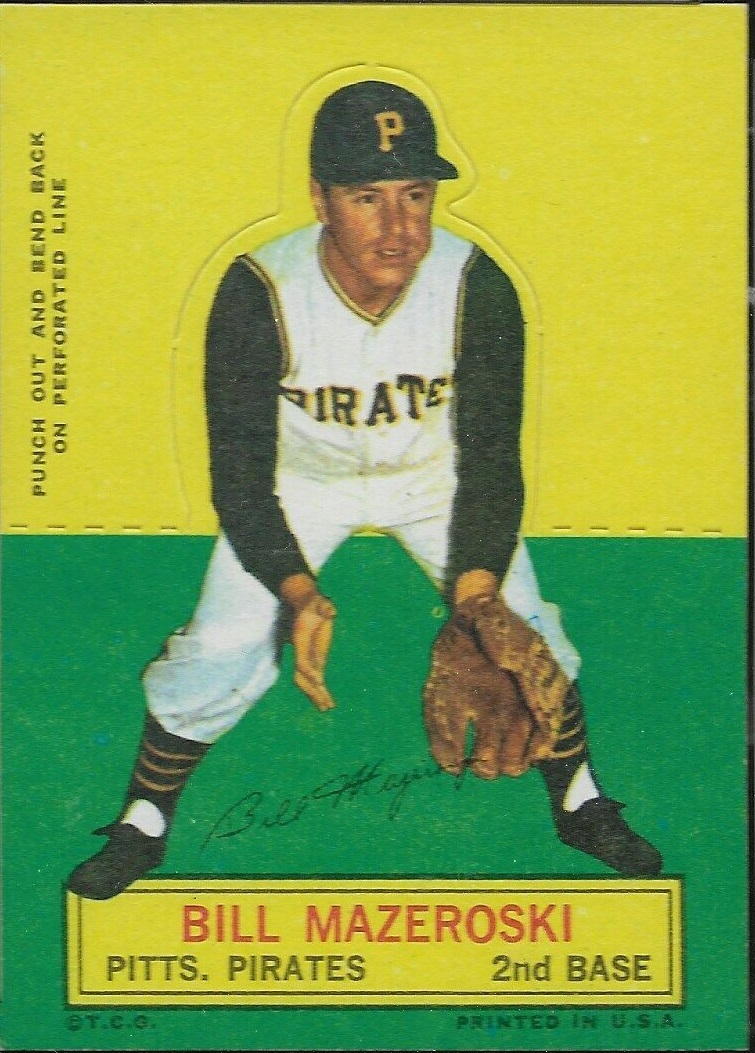 As you would expect, Mazeroski is shown in a fielding pose. Many of the premier sluggers in the set are shown in batting poses. If you’ll notice on the left border, there are actually instructions right on each card on how to properly stand up the cards. I made the photo big enough so you can see the outline around Mazeroski, which slightly differs from the horizontal middle line.

This is not a cheap card to acquire in high grade. As you would expect, many of them were used as they were meant to be used. Kids would get the cards, stand them up, not thinking that 56 years from now they are taking away some value from the card. If you check Ebay, you’ll see that some of the prices are just way too high, but a PSA 8 of this card is going to run you at least $250. That’s a nice return on a one cent investment. Drop down one grade and the price is between $100 and $200 (that’s quite a range to be honest, so the $200 one probably isn’t a realistic price). If you just want one as a collector and you care more about it being presentable than a high grade, then you can get one for as low as $20-$30. One that was obviously used as intended and has had some love over the years, sold for $15 recently. Still looks nice though.