Today’s Card of the Day is perfect for this day. Yesterday was Luke Walker’s 77th birthday, and he was featured in our daily This Date in Pittsburgh Pirates History article. Carl Taylor was mentioned this morning in the same feature, marking 49 years ago today that he was traded back to the Pirates. Both players were members of the 1971 World Series champs. Today’s Card of the Day is the 1968 Topps Rookie Stars card featuring Taylor and Walker.

Topps had numerous Rookie Stars cards featuring players from every team. The Pirates had two such cards and the second version is a little more collectible because it features Bob Moose and Bob Robertson. However, having two better players doesn’t equal superior value. That’s because the Taylor/Walker card is a high series card and they are harder to find than a first series card, which is where you would find the Moose/Robertson card. Walker and Taylor both stuck around the majors for some time, which makes them much better choices than many of the rookie cards from this era. 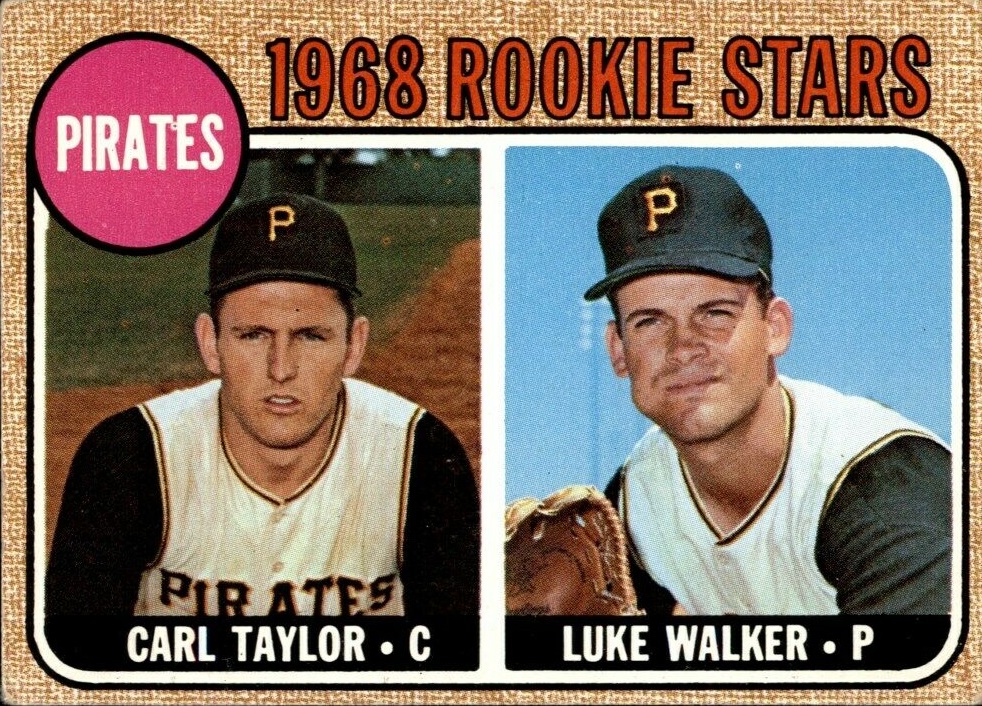 Both Taylor and Walker are shown in classic poses of the time. Many of the photos were taken during Spring Training or before games, with Yankee Stadium being a popular backdrop for old Topps photos. Taylor appears to be in a catching pose, something they recreated in his 1969 Topps card, which looks very similar. Walker is in the follow through from his delivery pose, staring off to the side. You can find that same type of picture on approximately every card of a pitcher from the 1960s (that’s only a slight exaggeration). Walker’s 1969 Topps card shows him in Spring Training holding his glove at his chest, looking off in the distance for the catcher’s (Taylor?) sign. For the record, Taylor caught Walker seven times during the 1968 season. 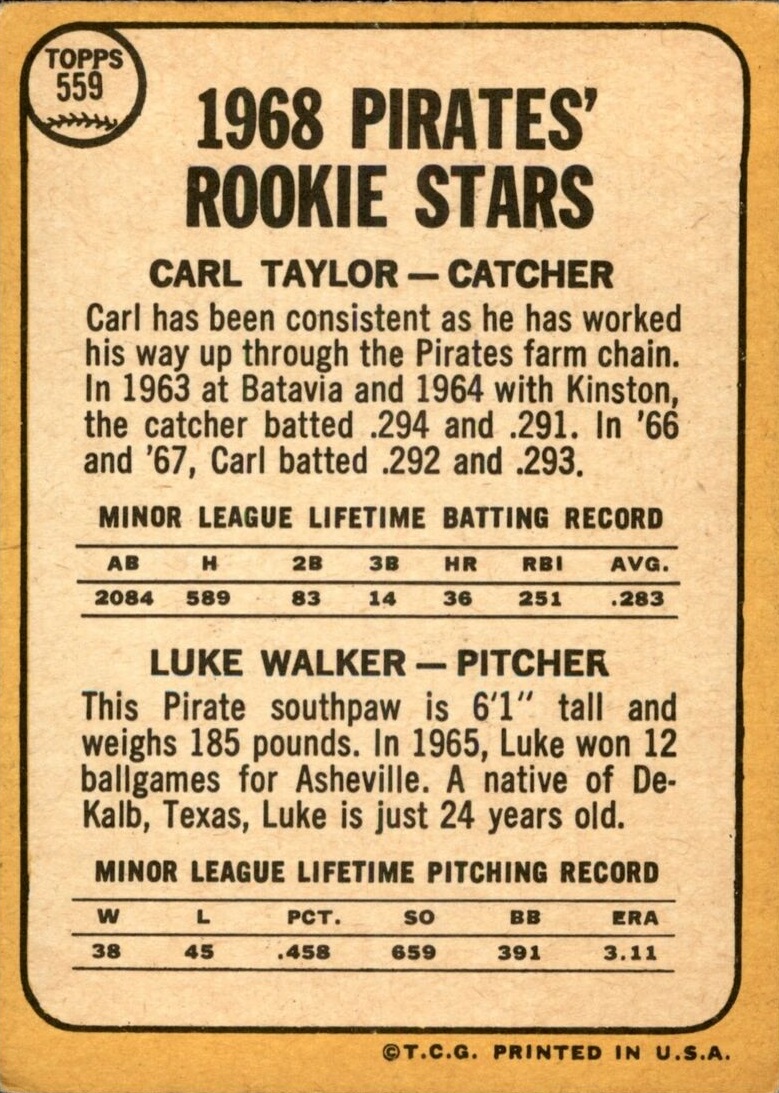 The back of this card includes their career minor league stats. Walker actually pitched for the 1965-66 Pirates, though he accumulated just 15 innings. Taylor didn’t make his debut until April 11, 1968, in the second game of the season. As you can see, Taylor put in quite a bit of minor league time and he had some quality seasons at the plate, at least as far as hitting for average. Walker was a bit of an odd choice for a rookie stars card because he missed most of the 1967 season. It ended up being a smart choice though because he was a quality swingman for the next five seasons, switching effectively between the bullpen and starting.

As far as a Pirates fan getting a card of Pirates players, you have Walker with eight seasons in a Pittsburgh uniform and Taylor was around for three, though not consecutively. He was a regular in 1968-69, then came back for the playoff push in September of 1971, playing seven games. He was gone by the middle of Spring Training in 1972. As I said, it’s not the worst choice, but it’s no Moose/Robertson grouping. However, you’re talking about a rookie card featuring two members of a World Series winning team.

If this card has caught your fancy and you would like to make it part of your home, you can find it in decent shape for about $3-$4 on Ebay, which includes the shipping cost. A high grade (graded) version will cost you a bit more. A PSA 8 recently sold for $50. It’s tougher to find because it’s a high number series card, but that’s just in comparison to lower number cards in the 1968 Topps set.