On June 1, 1897, the Pittsburgh Pirates did something that has happened once in their 139 seasons of Major League baseball. They outscored their opponents and lost the game. Seven Pirates runners crossed home plate that day at the Polo Grounds. The home New York Giants scored four runs, which was more than enough to win this day.

In 1896, Frank Killen led the National League with 30 wins. It was his second 30-win season and the third time that he threw over 400 innings in a season. Through early June in 1897, the Pirates won eight of his first ten starts and he looked to be on pace for another big season. This game seemed to be a turning point in his career and it obviously wasn’t a good one. Back when pitchers almost always finished what they started, he had a career 129-80 record at 26 years old. He would go 35-50 the rest of his career, including the June 1st contest in New York.

The opposing pitcher was Ed Doheny, who would go on to be a star pitcher for the Pirates, helping them to the 1903 World Series, only to have a serious mental breakdown prior to the Series and then never pitch again. Doheny barely had 150 big league innings at the time of this game.

The Pirates had an 18-11 record coming into play this day. They finished the season with a 60-71 record. So it was a turning point for the team as well. They were actually below .500 just ten days after this game. The Giants were a good team off to a mediocre start. They had a 14-13 record through the end of May. They went 69-35 the rest of the way that season. This game ended up being much bigger in retrospect than the event that happened that day, but it’s the event that makes it a story now because of its uniqueness in team history.

The umpire that day is an important note in this game. Sandy McDermott began his baseball career as a player and then umpired in the NL in 1890. Seven years later, he was in his second season as a Major League umpire. He was not getting great reviews and his career as a big league umpire would be over by June 29, 1897, just four weeks after this game. McDermott umpired the previous day and received a lot of grief from the players and press for his poor work. He would get more grief the next day. One of the Pittsburgh papers called his “one-man act” a farce, that “Sand-bagged” the Pirates, making a play on his first name.

This game started out in favor of the Pirates, despite McDermott’s best efforts. Pittsburgh scored three runs in the first without the benefit of a hit. Doheny was wild and the fielding behind him was poor at best. The Pirates added a solo run in the third, and once again they failed to get a hit. Doheny was losing a no-hitter by a 4-0 score.

In the fifth, Pirates first baseman Harry Davis was reportedly robbed of a hit by a bad call at first base. However, Jim Gardner came through with a single, moved up on a passed ball, then scored on a single by player/manager Patsy Donovan. An error on a fly ball hit by second baseman Dick Padden allowed Donovan to come around to score, making it a 6-0 game.

In the sixth, there was a bit of controversy, which was small in the overall scheme of things. Joe Sugden was hit by a pitch, then Killen walked. Elmer Smith sacrificed both runners into scoring position, then Bones Ely singled to right field. Sugden scored and Killen appeared to score, but was called out on a play that was said to not be close. The only reason that this wasn’t more of an issue at the time was because the Pirates had a 7-0 lead late in the game. They scored all of those runs while picking up just three hits total, all of them singles.

Things started going south for Killen in the bottom of the sixth. The first batter up was Silent Mike Tiernan and he drew a walk. Player-manager Bill Joyce hit a double. An error by Elmer Smith on a throw to third base allowed Tiernan to score the first run for the Giants. Hall of Famer George Davis followed with a shallow fly ball over second base that fell between three fielders for a single, though the New York paper said that all three could have caught the ball, but they backed up to avoid a collision. That made it 7-2.

Kid Gleason was up next. He’s known as the manager of the Chicago Black Sox, who threw the 1919 World Series. He singled to right field, then took second base on the throw that went to third. Ducky Holmes singled to left field to bring in two runs, making it 7-4 with no outs. That’s when the game went to pieces for the Pirates.

Catcher Parke Wilson hit a sharpe grounder to second base on the first pitch he saw. Dick Padden fielded the grounder, touched Holmes as he ran by, then threw to first base for the attempted double play. That’s when the fun started. The Giants yelled to Holmes to stay at second base and then umpire McDermott called both players safe.  Depending on which paper you read, you got completely different opinions of what happened.

The Pittsburgh papers claimed that Padden tagged Holmes, while the New York papers claimed that he missed him by at least a yard. They were also very different in their assessment of what happened next. The New York papers said that every player for the Pirates was out on the field surrounding the umpire and it was the “most disgraceful display put on at the Polo Grounds”.  The even claimed that outfielder Steve Brodie was out for blood and had to be restrained twice, once with a bat in his hand.

McDermott ejected four players, or three players, depending on your source. Dick Padden, Patsy Donovan and Frank Killen were all ejected, that much is certain. One source said that Harry Davis was also thrown out and that presented a huge problem. The Pirates only had 13 players at the time, not that odd, since teams usually had fewer players on the road to save on travel costs. They could have put in four replacements if it were not for what happened in the third inning. Jim Donnelly was hit by a pitch and had to leave. Jim Gardner, who was more of a pitcher than a position player, took his place.

All that the Pirates had left on their bench was catcher Bill Merritt, utility fielder Tom Leahy and pitcher Jesse Tannehill, who also played outfield occasionally. Leahy went out to right field, Merritt went to second base and Tannehill went to warm up. The source that claimed that Davis was also thrown out, said that Patsy Donovan pleaded with McDermott to allow Davis to stay in the game. What every source agreed on was that the Pirates refused to start playing and McDermott declared the game a forfeit. What they didn’t agree on was McDermott waiting the correct amount of time to make his decision.

Umpires were supposed to use a watch to give the team a warning that they had to start playing again or the game would be a forfeit. That rule is still in effect to this day, though it has rarely been used. That apparently didn’t happen back on June 1, 1897, which made manager Donovan even more irate at his decision. Donovan said that when he came out to talk about Davis staying in the game, McDermott made the immediate decision to call the forfeit. The Pirates were enraged at the decision and the umpire actually had to be escorted out, with help from the fans, who protected him from the players.

The final score officially reads as 9-0, which is standard for a forfeited game. The Pirates protested McDermott’s decision with the league office, but nothing ever came of it. The Pirates ended up with the loss, making it the only game in their history that they lost despite outscoring their opponents. 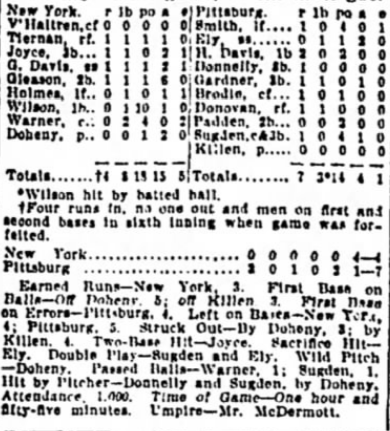