There weren’t many cards made of Hall of Famer Kiki Cuyler during his time in Pittsburgh. He was only around for seven seasons, and he played a total of 13 games during the 1921-23 seasons. He spent four full years with the Pirates and even one of his late 1927 cards already notes the team change after he was traded to the Chicago Cubs. Add in the fact that there weren’t many baseball sets during the 1924-27 time-frame, and some of the ones produced were very small, and you see why it’s difficult to find a card of Cuyler with the Pirates. That being said, here’s my favorite one that pictures him with the Pirates, a 1927 Exhibits.

The Exhibits set from 1927 consists of 64 cards and it has the catalog designation of “W461”, which means that it belongs in the miscellaneous group of cards from that era. Old set catalog numbers started with a letter, such as T for tobacco cards, N for nineteenth century cards or M for magazine cards. Then there’s a group that don’t quite fit in any other section, so they got a “W” for the letter, followed by a mostly random set of numbers afterwards, though they do go in a particular order.

By 1927, Cuyler was already an established star, so he was included in most sets during this time period, regardless of size. He had what could be considered as the best season in Pirates history in 1925, and he helped the Pirates to two World Series appearances and one title. He was a big name at the time in the baseball circles. The 1927 Exhibits set managed to include 24 future Hall of Famers.

Here’s the front of the card. The back is blank. 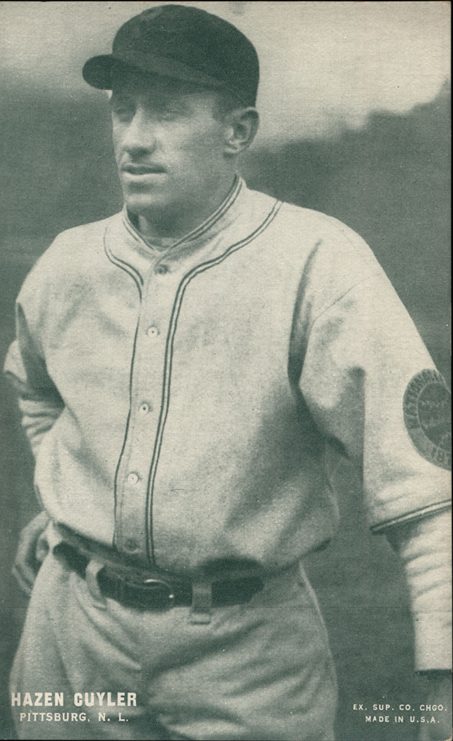 Cuyler is shown here in a photo that dates from 1925. You can tell that exact year by the patch on his left sleeve. In 1925, uniforms carried the “Golden Jubilee” patch, which was to celebrate the 50th season of the National League. It was the only year for the patch obviously. The front has the word Pittsburgh spelled wrong, though it’s true that some people held on to the old spelling from 1890-1911 longer than others, just like people in the 1890s would often use the H at the end, despite the city name being officially changed for those 21 years.

You also might notice that is says “Hazen” on the front, which is his actual first name, though you rarely see that used now. The Exhibits people were not fond of nicknames apparently. Pie Traynor has “Harold” on the front, Hall of Famer Goose Goslin has “Leon”, while Babe Ruth got the nickname in there along with his real name, printed as: Geo. H “Babe” Ruth. Four Pirates total made the set, which also included pitcher Ray Kremer and catcher Earl Smith.

I usually give a value for cards featured here, but this is a tough one to find, so there are only a few examples that have sold publicly recently. For a mid-grade one, you’re going to pay about $125, but a patient person can pick up a lower grade (though still presentable) version for under $100. It’s one of the few ways to get a Cuyler card with the Pirates, though you can find plenty of his cards from the 1930s if the team doesn’t matter as much as the player.