Today’s Card of the Day is an interesting offering from Fleer in 1960. They put out a set of 79/80 cards featuring some of baseball’s all-time best and sold them in packs for five cents each. The set was called “Baseball Greats”. The Pittsburgh Pirates were well-represented in the set, even though the Ralph Kiner card showed him on the Cleveland Indians for some reason. The set included Honus Wagner, Paul Waner, Arky Vaughan, Lloyd Waner and today’s subject, Pie Traynor.

At the time of this set, Topps had exclusive rights with active players. To work around that while capitalizing on the popularity of baseball cards at the time, Fleer decided to use all retired players, managers, executives. I put 79 and 80 for the set number because they issued 79 fronts and 80 backs. Pepper Martin, a player who starred with the St Louis Cardinals in the 1930s, never had the front of his card produced, but the back with #80 and his bio found its way onto a few other cards in the set. 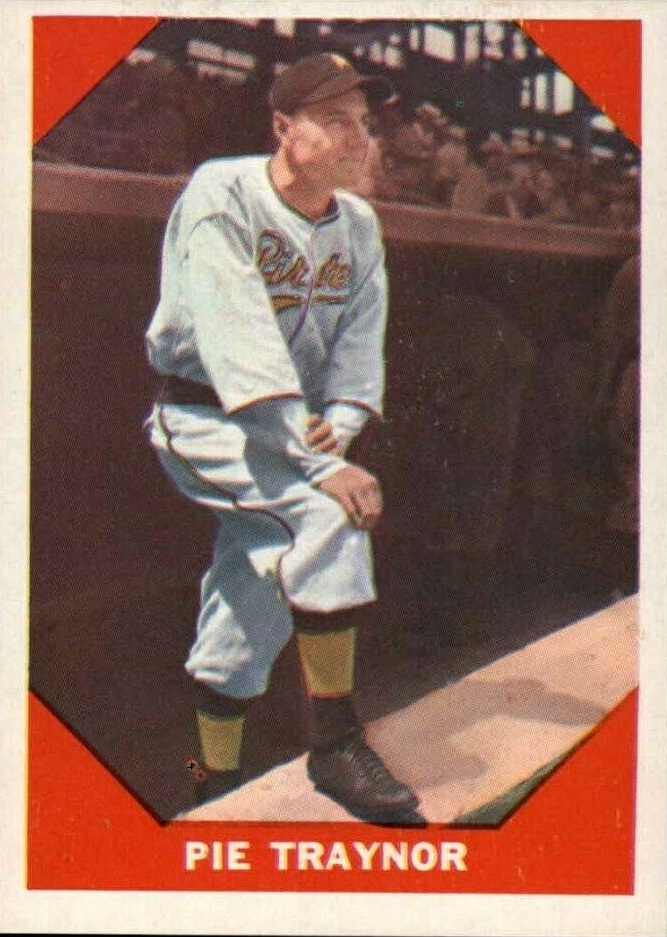 While Traynor was an all-time great player, and considered the best third baseman ever at the time that these cards were produced, they went with a picture of him as a manager. Fleer based their cards off of real photos, then colorized them to give a more modern look. This particular uniform style was used during the 1938-39 seasons and Traynor played his last game in 1937, though the last time he played regularly was two years earlier. He didn’t play at all in 1936 and he put himself into five games in the middle of 1937. He managed from 1934 until 1939. As mentioned, these cards were colored in off of black & white photos, so that explains the black & gold colors on the card. The Pirates used blue and red back in 1938-39. Everything that is gold in this photo was actually red back then. 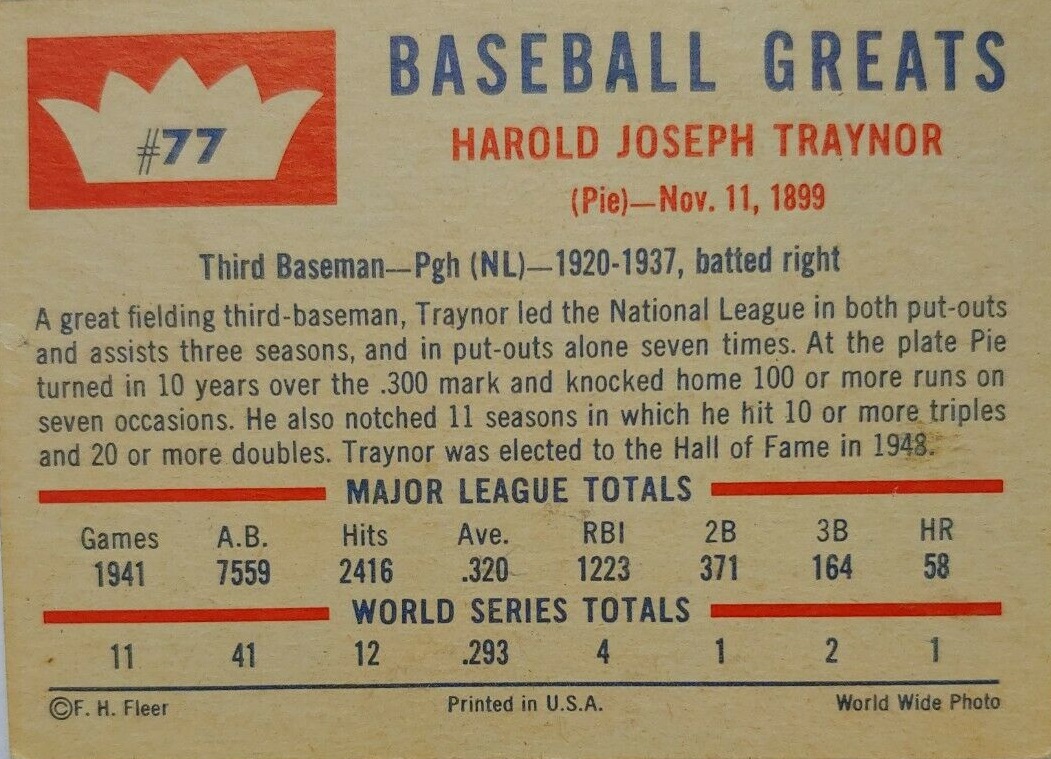 The back gives a history of Traynor’s career, noting his hitting and defensive accomplishments, as well as his election to the Hall of Fame in 1948. I’ll note that his RBI total is wrong on the card. He finished with 1,273 RBIs. Over a 12-year stretch from 1923 until 1934, Traynor’s lowest batting average was his .294 mark in 1924. In 1969, baseball celebrated its 100th year, commemorating the first professional team, the Cincinnati Red Stockings. For the celebration, an all-time All-Star team was chosen. Traynor was voted as the best third baseman in the first 100 years of baseball.

This particular set wasn’t that popular when it was produced, but it has gained some traction over the years. Most collectors would prefer cards from the playing days of players, but this set provides an affordable example of older players. Ted Williams had exclusive signing rights with Fleer, despite the stranglehold by Topps on active players, so the Williams card in this set would be considered a “playing days” card. Since the set was mass produced, you can get a “common” player like Traynor for $10 delivered in nice shape. You could also splurge a little and go for a nice graded one. You can find a PSA 8, which is near perfect condition, for $30-$40 on Ebay. There have even been a few sales under $30 in that grade. That’s not bad for a 60-year-old card of an all-time great.