Today’s Card of the Day is a guest submission from Howard Chasser, who collects Roberto Clemente cards and memorabilia. He shares the story about how he became a Clemente collector as a young kid, while giving some details on the 1955 Topps Roberto Clemente card that he purchased 40 years ago. He included scans of the original card he bought, which he still owns to this day.

I held off on featuring the Clemente rookie so we could have a guest submission from someone who owns the card, figuring that the story behind it would be a good one. Howard’s story of acquiring the iconic 1955 Topps Clemente is probably similar to numerous other collectors, but they’re all unique in their own way, so it’s possible that this won’t be the only time that we feature this particular card. I also hope that he is willing to share more of his Clemente card stories and possibly some memorabilia in the future. Enjoy.

Pittsburgh card of the day. HMMM. Let’s see – I’ve been collecting Roberto Clemente cards and memorabilia for over 30 years so it’s going to be a Clemente card – but which one to choose! So many good cards and stories.

My name is Howard Chasser and Roberto Clemente has been my primary collecting focus for over 30 years. Why not start at the beginning – 1955 Topps Roberto Clemente rookie. It is the card that started it all for me. I was about 13 years old (in 1980) and my mom had taken me to my first card show at the Coliseum Motor Inn in Hempstead NY. The only previous exposure I had to cards as collectibles was a collection of 1950’s cards that my local comic book shop (The Incredible Pulp in Baldwin, NY) had purchased and was trying to sell, including about a dozen 1952 Topps Mantles! I was blown away by all the old cards. I must have circled the room a dozen times. I kept gravitating back to a dealer who must have had all of the 1955 Hall of Famers in his case. To this day I don’t understand why the 55 Clemente “jumped” out of the case at me (I had never heard of Clemente at the time), but it did. After what felt like an hour of begging, crying, pleading and manipulating – my incredible mother (RIP) shelled out $48 for my Clemente rookie!

To this day the Clemente rookie is tied for my favorite (I love the 56 for similar reasons as well) Clemente regular issue card. I love the bright rich colors and horizontal format of the card. In case you are wondering, I do still have that original card (shown below). 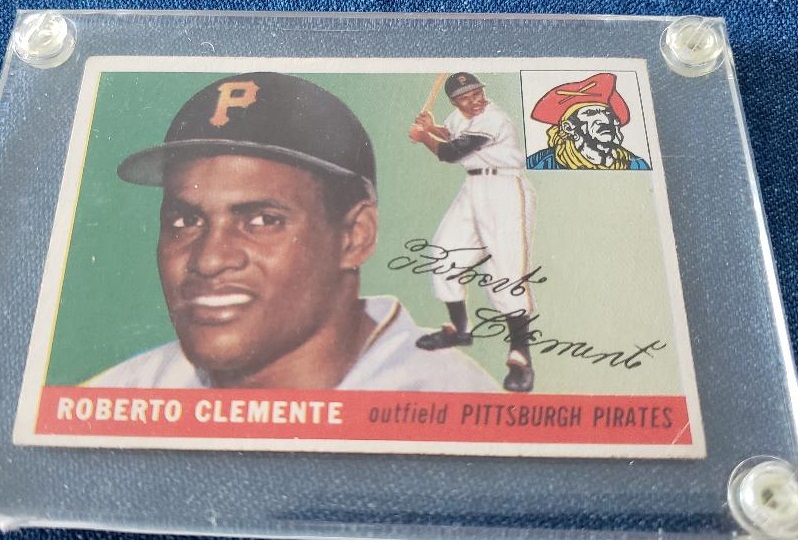 I like the fact that it is larger than all the cards that came after it. While it is by no means a scarce card, it starts to get pricey in mid-to-high grade condition, and to find one well-centered can be quite the challenge. It is card #164 and the Key card in the 1955 set. The front of the card features a great portrait and a batting pose with a facsimile autograph. The back of the cards (shown below) shows only 148 at bats in his minor league season with the Montreal Royals (Brooklyn farm club), who tried hard to “hide” Clemente so no other team would draft him. 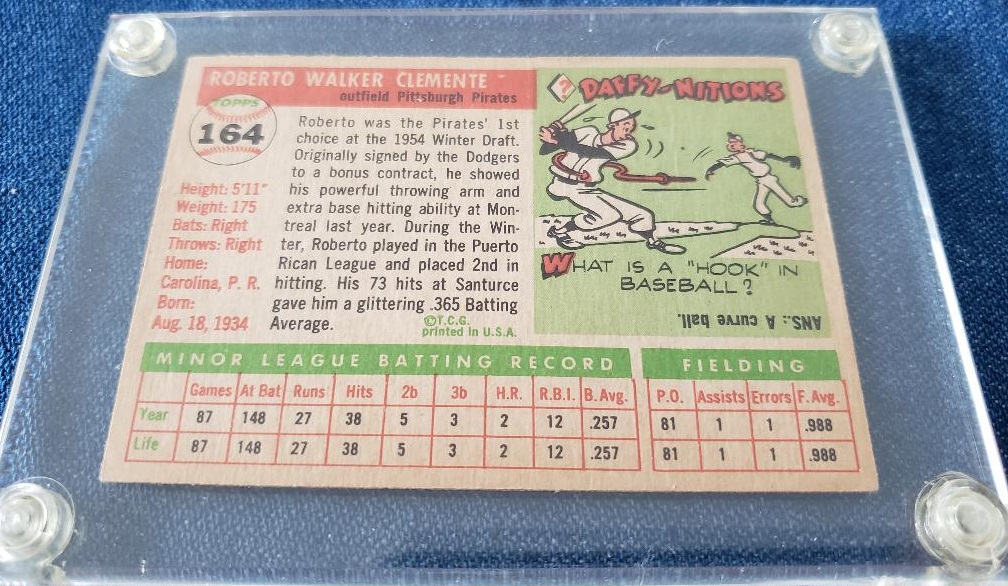 Today the Clemente rookie is almost unanimously considered one of the most Iconic and “must have” cards of the post-war era. Fortunately there is plenty of supply – the hardest part of owning one is deciding what condition you want it in and being willing to spend the money to get it.

The Clemente rookie was the “seed” that sprouted a 30-year chase for some of the rarest and most incredible Clemente cards in the hobby, many incredible friendship and a love of collecting that I am in process of passing onto my children …..but that’s a story for another day. Happy collecting.