Today’s Card of the Day is from the 1959 Topps set and it features three Pittsburgh Pirates. The title of the card is “DANNY’S ALL-STARS” and it has third baseman Frank Thomas, manager Danny Murtaugh and first baseman Ted Kluszewski. The 1959 Topps set featured many player combo cards, usually showing players on the same team. Earlier here, we featured the Buc Hill Aces card from this set, showing four pitchers for the Pirates. 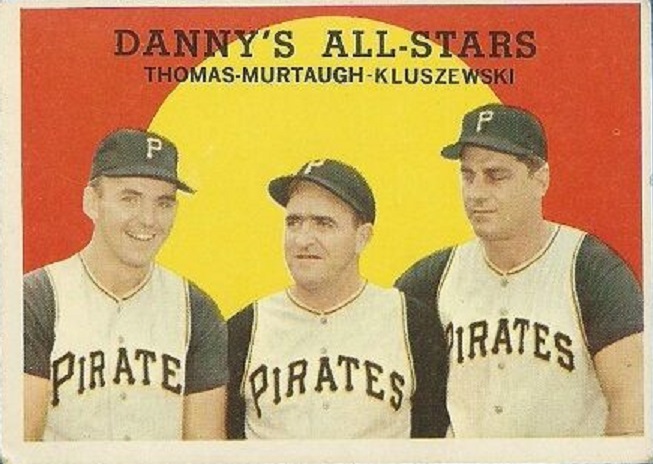 What is immediately odd about this card, besides the look that Kluszewski is giving Murtaugh, is that the phrase “All-Stars” is used. Both players were All-Stars during their career, but you assume that a 1959 card, based on 1958 results, would have All-Star players from that 1958 season. Thomas made the All-Star game in 1958 and he seems happy about that on the front of the card. It was his third selection. Kluszewski was a four-time All-Star with the Cincinnati Reds, making the team each year from 1953 until 1956. However, Murtaugh’s actual All-Stars in 1958 also included Bill Mazeroski, Bob Friend and Bob Skinner. So it would seem that the proper player selection would include those three and Murtaugh/Thomas. Kluszewski hit .292 in 1958, but he only had four homers in 100 games played.

That all being said, this is still a great card, just with a slightly misleading name. Before joining the Pirates, Kluszewski was a feared slugger. He averaged 43 homers and 117 RBIs during that 1953-56 stretch. He was slowed by a back injury, which limited his effectiveness during the second half of his career. Thomas was also a power hitter, coming off of his best season (35 homers) in 1958. In the middle, you have everyone’s favorite manager, Danny Murtaugh. Both of these players had Hall of Fame potential through 1958, but couldn’t keep up the pace. Murtaugh belongs in the Hall of Fame in my opinion, though at the time of this card that didn’t even seem like a faint possibility. 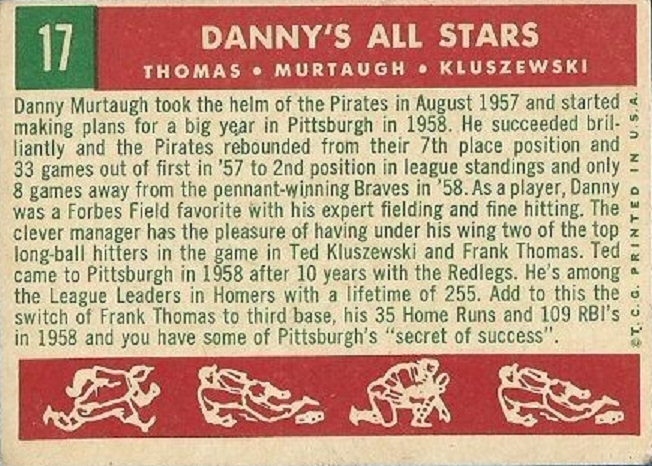 This card has a lot to read on the back. It starts with a bio on Murtaugh that takes up more than half of the back. The Pirates were much improved in 1958, though they slumped a little in 1959, before rebounding in a big way in 1960 (as some of you may know). The bottom part mentions that these two players  were among the top long-ball hitters in the game. As noted above, Kluszewski only hit four homers in 1958, but his 255 homers had him fairly high on the all-time charts at the time. To give that some context, breaking the 100-homer mark before 1920 was quite an accomplishment, so this was only 38 years removed from that time. This card may have jinxed the two sluggers, though the back injury for “Big Klu” was more to blame. He finished with 279 career homers. Thomas hit 286 career homers, with 163 coming before  this career was made.

Oh yeah, one other issue with this card, which wasn’t the fault of Topps. Thomas was traded in January, so by the time most collectors were getting this card in a pack, he was already a member of the Cincinnati Reds.

You can buy this card in decent shape in the $5 to $10 range on Ebay. It’s fairly cheap in high grade (graded) as well, with PSA 8 versions recently going for approximately $40 each, including shipping. I did not have this card prior to writing the article, so I’m buying one of the decent shape ungraded examples now…