As you may have noticed in these Game Rewind articles, the Pirates usually win. Off-hand I remember one changeup that I threw, which involved a Babe Ruth home run, so it was forgivable. Unless I’m forgetting something, this is loss #2 in this feature for the Pittsburgh Pirates franchise. I’m giving you the heads up now so you won’t be disappointed at the end.

Back in 1884, the Pittsburgh Pirates were in their third season of existence. It was three years before they moved to the National League, seven years before the Pirates name ever came up, 11 years before the team itself embraced the nickname (happened in Spring Training of 1895) and 28 years before anyone ever saw the word “Pirates” on one of their jerseys. They were the Alleghenys then and they played in Allegheny City, which is now part of Pittsburgh. Most of the early references to the team never even had “Pittsburgh” and “Alleghenys” together.

This particular season was one of the worst in franchise history. They finished the year with a 30-78 record and had five different managers throughout the year. At the time of this contest versus the Providence Grays, they had a 30-76 record, 43 games out, with two games left against Louisville to finish out their season. In the first of those two games against Louisville, they had outfielder Chuck Lauer start the game, then when he did poorly, they threw center fielder Charlie Eden on the mound. A game in which two outfielders pitched the entire game and switched between center field and the mound mid-way.  That was the 1884 Alleghenys in a nutshell.

The Providence  Grays were a National League team at the time. So this was considered to be an in-season exhibition game between the rival leagues. Pittsburgh was at home waiting for Louisville to swing by, while Providence was in Cleveland three days earlier, traveling through Pittsburgh, on their way to Philadelphia to finish up the season.

Providence had an 84-28 record in 1884 (83-28 at the time of this game), which was good for the NL title. They had Charles “Old Hoss” Radbourn on the mound at the end of the greatest season ever for a pitcher. He won 59 or 60 games depending on the source you use, with the confusion coming from the rules put in place for pitcher wins years later, which leaves one of his games up in the air, with historians taking both sides. Either number you prefer (I like 59), he set a record that will never been approached by any current or future pitcher in their two best seasons combined.

The NL was considered to be the stronger league at this time, and Providence was the best they had, with the best pitcher in baseball on the mound. All that the Alleghenys had was a home field advantage on this day. The game was played at Union Park, which is more commonly known now as Recreation Park, though not in 1884. Approximately 1,000 people showed up to see Radbourn take on Fleury Sullivan, a 22-year-old (possibly 23, since his exact birth date isn’t known) with a 16-35 record in his only season of pro ball in 1884. Sullivan took a bunch of punches on the chin that year and kept going, setting the team records for most losses, most hits allowed and most earned runs allowed. Luckily, this particular day was an exhibition game, or all three records would be worse off.

I’ll note that game reports from the day lack true detail, mostly because it was an exhibition game and Pittsburgh was very bad at the time, so I’m mostly working off of the boxscore (shown below). One thing that the local paper did note was the first pitch of the game. Sullivan threw one over the plate that Paul Hines hammered for a home run. Hines would join Pittsburgh six years later at the end of his career. He’s known for turning the first unassisted triple play (some controversy here too) and winning the first triple crown, though RBIs weren’t a stat back then, so no one knew what a triple crown title would entail.

The Pittsburgh Commercial Gazette noted that “the play of Providence was a treat, and considering their opponent, the home team made a tolerable display”. That was a nice way to put it, believe it or not. Pittsburgh committed ten errors on the day. Even though Charlie Eden and Tom Forster committed one error each, their play on defense was praised. You have to remember that back then, players didn’t wear gloves and official scorers were ruthless with handing out errors. If you could get to the ball, you needed to make the play, didn’t matter if the play was difficult, or the ball was hit hard. That being said, ten errors was a lot, no matter who scored the contest.

Providence put up one run in the first (homer by Hines), seven runs in the second, then the rest of the game just breezed quickly along. They tacked on one run in the seventh for a 9-0 win, with the game being played in a tidy 80 minutes. Radbourn pitched well, but he didn’t exactly dominate. Chances are that he wasn’t going 100% effort with the one-sided score and the fact that it was an exhibition game. In the eighth inning, the Alleghenys loaded the bases, but couldn’t push a run across.

The Alleghenys had eight hits total, including three from Charlie Eden. The lead-off hitter was right fielder Ed Swartwood, who was the first batter in franchise history back on May 2, 1882. Doggie Miller wasn’t playing this game for Pittsburgh because he got injured four days earlier and had to leave the game. Radbourn not only threw a shutout, he had two hits and scored a run.

Here’s the boxscore with some explanations below. 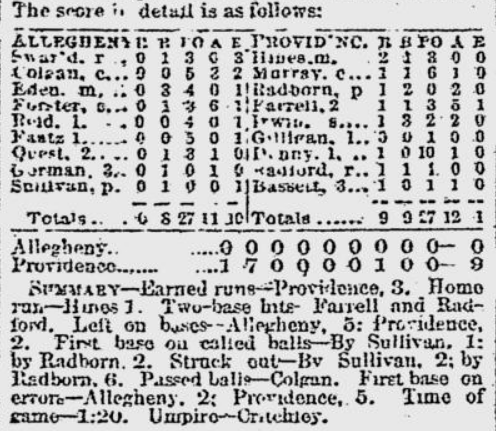 The umpire for this game was Morrie Critchley, who threw a shutout in his MLB debut with the Alleghenys in 1882, then never pitched for the team again. Note that in the boxscore, the center fielders (Hines and Eden) have “m” next to their name. That stood for middle fielder. Also, old boxscores always used 1 and l for first base and left field, which is always fun when you’re looking at small print. Jay Faatz was the first baseman for the Alleghenys, Billy Reid was in left field. Joe Quest and Jack Gorman were late season additions, who played just 20 games total with the team. The stats are: runs, hits, putouts, assists, errors.