This is a first for this feature because there are no known baseball photos of Jim Gray, and trust me, I’ve been looking for them in old newspapers.  He was really a little too obscure to use before we made our site switch, but since we are now known as Pittsburgh Baseball History, Gray seems like a great subject to use. To summarize his entire baseball career, he played six big league games between 1884 and 1893, playing in three different Major Leagues. During that era though, he was a well-known local baseball player, even though his career in the majors amounted to very little.

Gray was born in August 7, 1862 in Pittsburgh and died in town 75 years later. He never left, even after death. He’s buried in the Union Dale Cemetery, located in Pittsburgh’s North Side. According to Baseball-Reference, he had the nickname “Reddy”, but I was unable to find any mentions of that name in extensive research of the local papers at the time. His burial location online is also noted as Homewood Cemetery, but I was able to confirm that Union Dale is the correct location. That bio differences are a by-product of his obscurity.

I’m going to go a little out of order here because one of the best notes about him doesn’t quite match up to his time in the majors. In the September 7, 1892 issue of the Pittsburgh Press, an unknown writer said that “if Jim had been as much of a batter as he was a fielder, he would have been playing professional ball long ago”.

As you will see at the end, that’s an interesting scouting report when used in comparison to his big league time. The fact of the matter though was that he was already a professional baseball player, and not just the four Major League games that he had played up to that point. He also played minor league ball during the 1887 and 1888 seasons.  That’s besides the fact that he also had two game left in his with the Pirates in 1893, as well as a player/manager job during the 1898 minor league season.

Gray would explain his choice to play at the amateur/semi-pro level in town instead of for a pro team in an 1892 issue of the Pittsburgh Press. He was getting paid twice what he would playing baseball, while working at the Allegheny City Hall full-time. The job he had gave him a chance to play for the local teams, including some appearances with the Major League squads. In his own words, he was getting more money, still played competitive ball, and he never had to go on road trips.

We go back to his big league debut now, which happened on October 9, 1884. The 1884 season ended in mid-October, which teams agreed was a bad idea once they played in those mid-October late afternoons. It was the third year of Major League ball for the current Pittsburgh Pirates franchise. Their story started in the American Association, which played its first games during the 1882 season, and the Alleghenys were there from the start. In their third season, they were awful, finishing with a 30-78 record. However, they had a promising 19-year-old named George Miller, who is more commonly known now as Doggie Miller.

On October 9, 1884, the Alleghenys were at home taking on the Toledo Blue Stockings, when Miller was injured in the third inning. Gray, who at the time was playing for the East End team in Pittsburgh, was called into duty. He went 1-for-2 with a single, but committed errors on two of his four chances. The newspaper said that day that “Gray, a local kid, took his (Miller’s) place and did some awfully wild throwing”. I don’t know if Gray was actually with the Alleghenys at the time, or was just in the right place at the right time, but he didn’t play in an exhibition game with the team days later, despite Miller still being hurt. Teams carried very few extras back then and sometimes a local player would be pressed into duty. This appears to be one of those situations.

One interesting note is the career stats for Gray. They show that he played seven innings in this game, but Miller was said to have been hurt in the third inning and the game was called just as the seventh inning started due to darkness. Another paper recap says that Miller “became disabled while running wild” in the fourth inning and Gray replaced him. While there’s no play-by-play available, we know that Gray didn’t play seven innings. It’s possible that he only played three innings on defense.

He wouldn’t get another chance in the majors until six years later when Pittsburgh had two Major League teams for one year, and he ended up playing for both of them. He was playing minor league ball during the 1887-88 seasons, so there wasn’t an opportunity to fill in for the local club if needed.

When he wasn’t in the minors, Gray would show up in the local newspapers often while playing for the East End Gym team, the Homesteads, Our Boys (yes, that’s the name) or the Allegheny Athletic Association Base Ball team. In 1889, he was called “without exception, the finest all-around infielder in the county league”. During a time in 1891, he played for a team called the Grays, which feels an awful lot like they named the team after him. That happened during that era, notably when the Pirates went by the name “Hanlons” for a brief time in 1891, named after Hall of Fame manager Ned Hanlon. Gray also played preseason, in-season and postseason exhibition games against the Alleghenys/Pirates at various times throughout his baseball days.

During the 1890 season, Pittsburgh had a club in the Player’s League, now commonly called the Burghers. Back then most papers just called them Pittsburgh (or the Pittsburghs) and the Alleghenys were always called the Alleghenys to avoid confusion. It was hard to confuse the teams on paper because the PL team had most of the big name players and the Alleghenys won 23 games all season. Gray played for the PL club on June 17th, batting eighth and playing second base. He had one hit, scored two runs and committed three errors in ten chances. The Pittsburgh Dispatch said that “he played well after getting over his nervousness in the first inning”. They also said that he will be one of the best second baseman in the profession if he continues.

The PL team gave him another chance on June 18th and it paid off with a 6-0 win, with Gray contributing at the plate. After a walk and an error in the second inning, he lined one to the left center gap that died at the wall, allowing him to circle the bases for a home run. He made six plays in the field without an error, though he got some help on an errant throw from the catcher, who was backing up the play at first base. Despite the success at the plate, he was done with the Burghers after two games, but he wasn’t done playing Major League ball that season.

On August 15th, the Alleghenys were in Cleveland and without shortstop Ed Sales, who was injured. They were also without infielder Fred Roat for a time, but he was scheduled to join the team the next day in Chicago. Manager Guy Hecker asked owner J. Palmer O’Neill to send him a shortstop for one game in Cleveland. That shortstop ended up being Jim Gray, who made the trip to Cleveland specifically for one game. It was a big deal in the local papers, including the Pittsburgh Dispatch, who posted this story about the game: 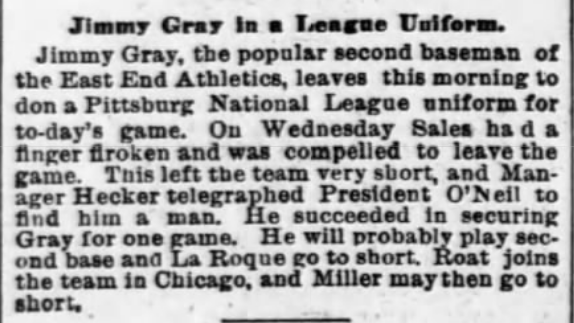 Gray actually went to shortstop and it was a terrible experience for him. He committed two costly errors, made three errors total, and he went 0-for-3 at the plate. The Alleghenys lost 15-0. This was his fourth big league game, yet he was playing in his third different Major League at the time.

Despite the poor showing, Gray was always regarded as a very popular player in town and was often designated as the team captain during big exhibition games played in town that would draw crowds as big as some of the Major League games. Because he stayed active in baseball and was well-known around town for his skills, he ended up with another chance to play for the Pirates in 1893. In fact, his next game with the Pirates came exactly three years after the game from 1890.

On August 15, 1893, Gray started at shortstop in place of Jack Glasscock and he collected two hits, including a two-run double that proved to be the difference in a 10-8 win. He had just two plays in the field and handled them cleanly. One earned him praise in the papers. A high throw from the catcher looked to be outfield bound, but he made a barehanded catch and then quickly tagged the runner trying to steal second base. His double play partner that day was Louis Bierbauer, who handled 14 plays in the field without an error.

Gray played again on the 16th and collected two more hits. He made one error in three chances. The local press praised his ability as a good substitute, but noted that Glasscock had much quicker hands and the ability to turn the double play better. The Pirates left for Boston after this game and Gray stayed home, ending his Major League career.

Gray played six big league games, four for the Pittsburgh Alleghenys/Pirates. In those six games, he hit .304 and drove in five runs. That was from a player who didn’t have the bat for pro ball. In the field, he committed nine errors in 32 total chances, for a .719 fielding percentage. That coming from the player who had the glove to play pro ball. He might be very obscure in Pittsburgh history right now, but he was a well-known baseball player in town for many years, who got four chances to play for the local big league clubs.