During the 1935 season, the Pittsburgh Pirates took time off from the regular season to go to Green Bay, Wisconsin, where they played the St Louis Browns of the American League. It was an interleague exhibition game back when teams played their share of in-season exhibition games.

The 1935 Pirates finished with an 86-67 record, which sounds like a strong season, but it was only enough to finish in fourth place in the National League. The Browns in 1935 went 65-87, placing them in seventh place in the eight-team league. At the time of this game, the Browns were coming off of a doubleheader sweep against the Chicago White Sox. This exhibition game took place the following day, which means that they not only played two games the previous day, they had to travel afterwards to Green Bay for the game.

At least the Browns had off the next two days. The Pirates played a Sunday doubleheader in St Louis (against the Cardinals), losing both games to give them a 55-47 record. They traveled to Green Bay for the exhibition game, then went to Wrigley Field for a Tuesday afternoon game.

This game included two Hall of Fame player/managers near the end of their playing career. Pie Traynor was leading the Pirates at the time, while Rogers Hornsby was at the helm for the Browns. Traynor started at third base in this contest and played the entire game. Hornsby came in late at first base and got an at-bat. Besides those two all-time greats, the Pirates had Paul Waner and Arky Vaughan batted third and fourth respectively. Lloyd Waner didn’t play in this game because he was injured the previous day when he ran into the outfield wall. He ended up missing exactly two weeks.

The Pirates had Jim Weaver on the mound, with Mace Brown taking his place for the final three innings. The Browns had Russ Van Atta starting, a struggling 29-year-old lefty who was acquired mid-season from the New York Yankees.

There is no play-by-play available, mostly because it was an exhibition game. Even the notes from the game lack true detail. Surprisingly, the recap sent to the Pittsburgh Post-Gazette said that the highlights of the game were the defense by St Louis shortstop Lyn Lary, and the hitting of Moose Solters, who had four hits for the Browns. I say “surprisingly” because the Pirates won the contest 6-3 and apparently didn’t have anything noteworthy for the local paper. Solters was a leading slugger in 1935 and Lary was a solid defender for many years in the majors, so there was no surprise that either did well in this contest.

The Pittsburgh Press had an expanded game recap, but only mentioned that Solters showed up the Pirates, who didn’t want him. There’s a story behind that description of Solters. He was born (and died) in Pittsburgh and played local ball in the area, but the Pirates never gave him a shot. He had a great three-year run (1935-37), then dropped off quickly, before a beaning ended his career early.

The Pirates got contributions on offense from the top seven hitters in the order. Paul Waner and Gus Suhr each had a single, double and a run scored. Woody Jensen had two hits and scored two runs. Bud Hafey, Lloyd Waner’s replacement and the cousin of Hall of Famer Chick Hafey, had a single and run scored. Pie Traynor went 1-for-4 with a single. Jim Weaver allowed two runs in six innings and Mace Brown allowed one run in three innings.

The catcher for the Pirates was Aubrey Epps, who played one big league game and had three hits and three RBIs. Despite great stats in his MLB debut (then never playing again), he was with the Pirates for the start of the 1936 and 1937 seasons. In fact, this game happened just days after he joined the Pirates, so he played an in-season exhibition game before his debut, which occurred 55 days later. We covered his time with the Pirates in full details here.

On the other side of the field, Rogers Hornsby went 0-for-1 and handled four plays at first base. A crowd of 3,500 attended the game.

Here’s the boxscore courtesy of the Pittsburgh Post Gazette 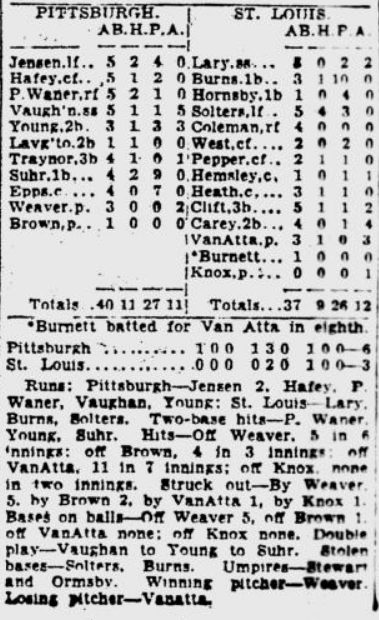