One of today’s birthdays in our This Date in Pittsburgh Pirates History article is Guy Bush, who spent the 1935-36 seasons with the Pirates. He won 172 games in his career, but he’s probably best known for giving up two of Babe Ruth’s three homers on May 25, 1935, which ended up being the final three homers of Ruth’s career. While Bush didn’t have much of a career with the Pirates, he deserves to be known for his overall career (especially on his date of birth), so here’s a recap of his best game while he was a member of the Pirates.

Coming into play on June 11th against the Brooklyn Dodgers, Bush had a 3-2, 3.48 record. He allowed one run in a complete game victory over the St Louis Cardinals five days earlier, and he threw 1.2 shutout innings over the Cincinnati Reds three days earlier, closing out a win for the Pirates. Bush had already faced Brooklyn twice in May, throwing a complete game in a 9-2 win on May 5th (just one earned run), followed by four runs over 4.2 innings on May 19th. So anything could happen in this June 11th game.

The mound opponent that day was Tom Zachary, who shares something in common with Bush. Zachary won 186 games in his career, but he is known for something Babe Ruth did as well. When the Bambino hit his record-breaking (his own record) 60th homer in 1927, it came against Zachary. So the two starting pitchers had something to talk about.

The Pirates had a 29-20 record going into action on this day. The Dodgers weren’t bad, sitting at 23-20. The lineups favored the Pirates heavily in this game. Future Hall of Famers Lloyd Waner, Paul Waner and Arky Vaughan were at the top of the order for the Bucs. The only Hall of Famer for the Dodgers was Al Lopez, and while he had a strong playing career spent partially with the Pirates, he’s in Cooperstown as a manager. This game was played on a Tuesday afternoon in front of a small group of 3,345 fans at Ebbets Field.

Both clubs went down in order in the first. Arky Vaughan led off the second inning with a single, before Zachary got three straight ground outs to quickly end the frame. Vaughan advanced a base on each of the first two outs. Brooklyn threatened in the second with consecutive singles to start the inning. Bush then picked up a strikeout and a fly ball to right field, before getting Al Lopez to ground out to shortstop to end the inning.

The Pirates got on the board first in this contest. The first three batters reached in the third inning without the Pirates taking a swing. Tom Padden walked. Bush tried to sacrifice him to second base and the throw from Zachary to second base was late, resulting in a fielder’s choice. Lloyd Waner tried to bunt both runners up, but instead he reached on an infield single. The first run scored on a ground out by Woody Jensen, with the out being taken at second base. Paul Waner brought in the second run with a sacrifice fly, then Jensen was thrown out stealing with Vaughan at the plate. Pirates led 2-0 at that point.

After Bush limited the Dodgers to a single in their half of the third inning, Vaughan singled up the middle to start the fourth. He scored three batters later on a Tommy Thevenow double.

The bottom of the fourth saw Bush once again work around a single for a scoreless inning. The Pirates threatened in the fifth with a double from Jensen and a walk by Vaughan, but it remained a 3-0 game. Bush had a 1-2-3 bottom of the fifth.

In the sixth, Tommy Thevenow reached on an error, then Guy Bush singled him over to third base. Lloyd Waner made it a 4-0 game with an RBI single. Bush set the side down in order again in the sixth.

After the Pirates failed to reach base in the seventh, Jim Bucher broke a string of eight straight outs with a single. He was also the last batter to reach, getting on with a fourth-inning single. Al Lopez drew a walk with two outs and Brooklyn pinch-hit for Zachary with Babe Phelps, who grounded out to first base to end the inning. Phelps remained in the game at catcher, replacing Lopez. As a side note, Lopez and Phelps were the catchers for the 1942 Pirates.

The Pirates got a walk from Tom Padden in the eighth, while the Dodgers threatened again in the bottom of the inning. They got two infield singles, with the lead runner moving to third base on an error by Padden. Bush got Sam Leslie to ground out to second base to end the inning.

Lloyd Waner picked up his third hit of the day in the ninth, but never advanced past second base. An error by Tommy Thevenow in the ninth resulted in the only Brooklyn runner of the inning. Bush retired Phelps  on a grounder to second base for the final out, giving the Pirates a 4-0 win.

Bush allowed seven hits (all singles) and walked one batter. He picked up seven strikeouts and lowered his ERA to 3.10 on the season. Arky Vaughan went 2-for-4 with a walk, giving him a .399 average on the season. He would finish at .385 that year, setting a Pirates single-season mark. Paul Waner came into the day with a .322 average, but he went 0-for-5. His brother Lloyd had a .318 average before his 3-for-5 day. The two flipped spots on the hitting leader charts, with Lloyd taking an 11 point lead (.325 to .314) by the end of the day.

The Pirates had troubles with Zachary, but not on this day. He had thrown a complete game against them on May 16th in which he tossed 13 shutout innings. Just 12 days earlier, he allowed one run over nine innings in a win. Zachary had a 12-7 record against the Pirates coming into this game. He would end up losing four of his last five meetings against them.

Here’s a photo of Bush during his time in Pittsburgh 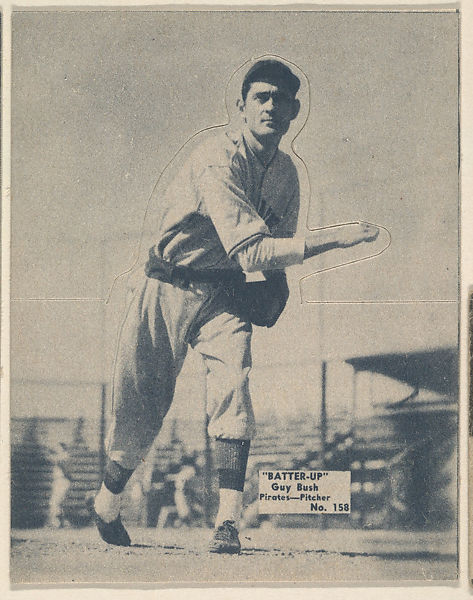