Today’s Card of the Day is a 1912 T207 card of pitcher Howie Camnitz, who was born on this date in 1881 in Covington, Kentucky. We included his bio earlier today in our This Date in Pittsburgh Pirates History article. We also recapped an overlooked game from his 1907 season that deserves a lot more attention. That was posted in our Game Rewind section earlier today. To complete the trifecta, now we take a look at one of his baseball cards from the middle of his career.

The T207 set was a tobacco set that had advertisements for a handful of cigarette brands of the day. I’ll get into the details of the backs below and their potential value. The set was named well after it was released and it’s just a catalog number, with the “T” indicating that it belongs in the tobacco category. The T206 set is the most popular set from that era (you might know it from the famous Honus Wagner card). This set is next in line in the catalog. It was also known as the brown background set. 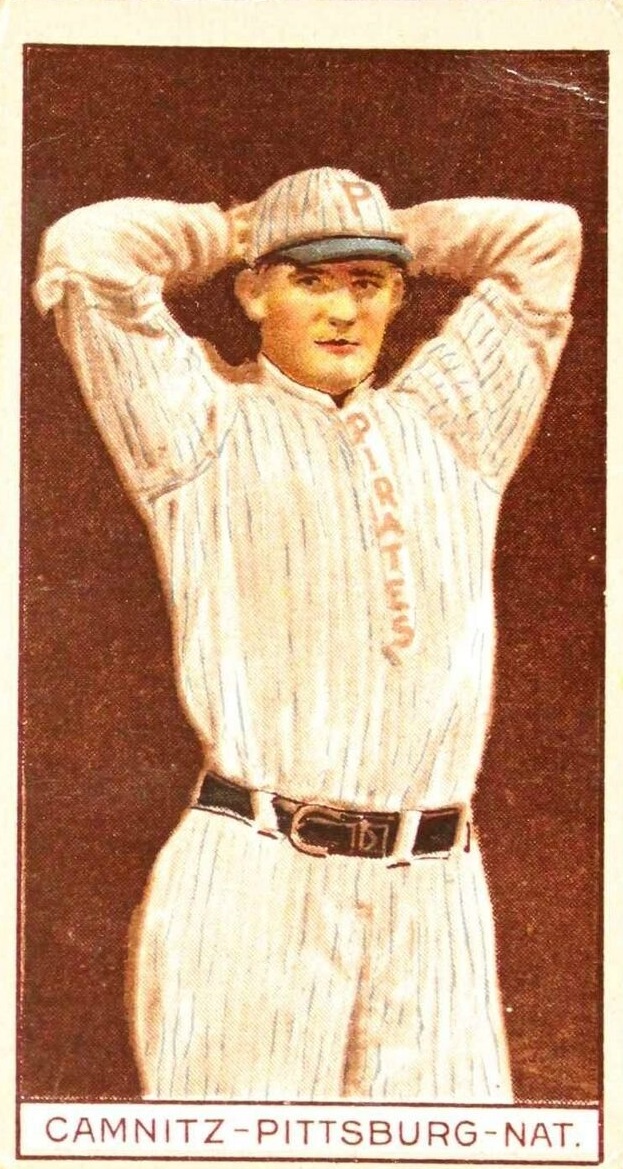 Camnitz has much more popular cards, but I chose this one because the T207 set pictures him in his 1912 Pirates uniform, the first year that they actually put the word “Pirates” on their uniform. The team nickname was never official during the early part of the franchise history (1882-1911 in this case) and they went by many names during that time, most popular being the Alleghenys at first, and then the Pirates, which caught on with the team in spring of 1895, though it was used to reference the team by some people dating back to 1891. This is the first time that the team itself chose to display the team name on the jerseys.

You can see from the front of the card why some people referred to it as the brown background set. It’s not a colorful set by any means, which is why the popularity of the set has never reached the heights of other sets from the era. It also lacks some very popular players from the day (Honus Wagner and Ty Cobb are examples of missing players). They still used the “Pittsburg” spelling on front, which was the official spelling of the town name from 1890 through 1911. 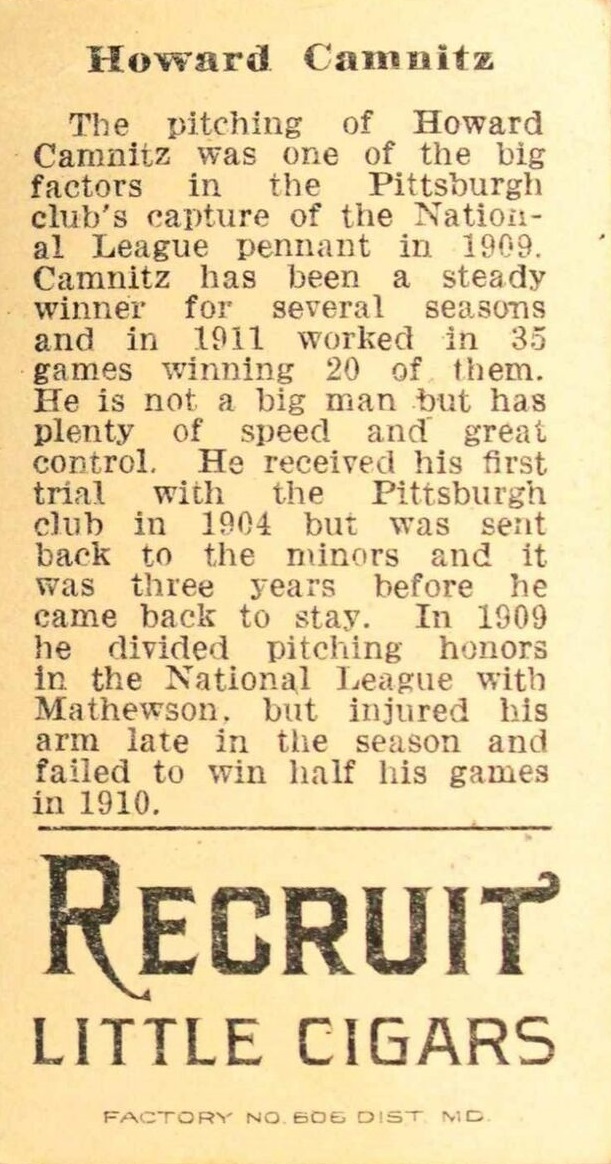 As you can see, there’s a nice bio on Camnitz, but no stats on the back like you’re used to with newer cards. They talk about Camnitz’s contributions to the 1909 World Series champs, get a mention in for the great Christy Mathewson (always good to be in the same sentence as him), and talk about his size. Camnitz was small, even for a player back then. He stood 5’9″, 165 pounds, yet he still managed to throw over 2,000 innings in his career and was effective (2.75 ERA) for most of his big league time.

The Recruit Little Cigars ad at the bottom is one of five brands found in the set. Camnitz can also be found with a Napoleon brand back, while the other three brands are only found on 50 of the 200 cards in the set. Technically one brand (Red Cross) is so rare that they haven’t found at least one example for all 50 players yet. The 150 cards with Recruit/Napoleon backs are easier to find than the other backs. Some players in the set are extremely rare because they were in the other group (Broadleaf/Cycle backs).

This particular card is a bit rare, especially compared to his T206 cards (he has three in the set) so the fact that the set isn’t highly popular, doesn’t keep the price down. If you wanted this Camnitz card, you can find a low grade one for $50 or less. If you wanted a high grade one, you will pay into the three and possibly four figures. Or you could always just grab a reprint for a few bucks if the set isn’t your cup of tea, but you like the history fact with Camnitz and the 1912 jerseys.