Some of you had to know that when I shared a 1951 Bowman Murry Dickson card at the bottom of an article this morning, that there would be a follow up article featuring him as the Card of the Day. Dickson won 172 big league games while pitching for some very poor teams, including his entire five-year run with the Pirates. He had just 14 big league wins before his 29th birthday, spending two of those years serving during WWII. In honor of his service, and today being his date of birth in 1916 (he passed away in 1989), he got a bio in today’s This Date in Pittsburgh Pirates History article, a full article celebrating his impressive 20-win season in 1951, followed by this article right here, looking at that 1951 Bowman card. 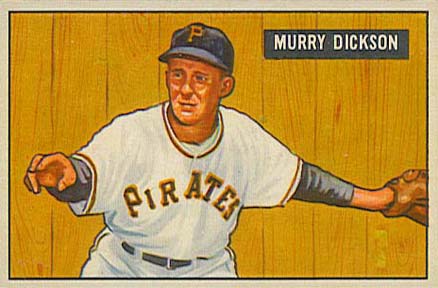 As you can see, Bowman used an artist for their 1951 cards. They used real photos on their first big set in 1948, then went to the artist renditions from real photos in 1949. Dickson appears to be in front of a wooden fence, in a staged photo, depicting his follow-through from his delivery. He looks every bit of his 34 years of age in this photo, though the pained expression on his face might just be from playing for the early 50s Pirates teams. 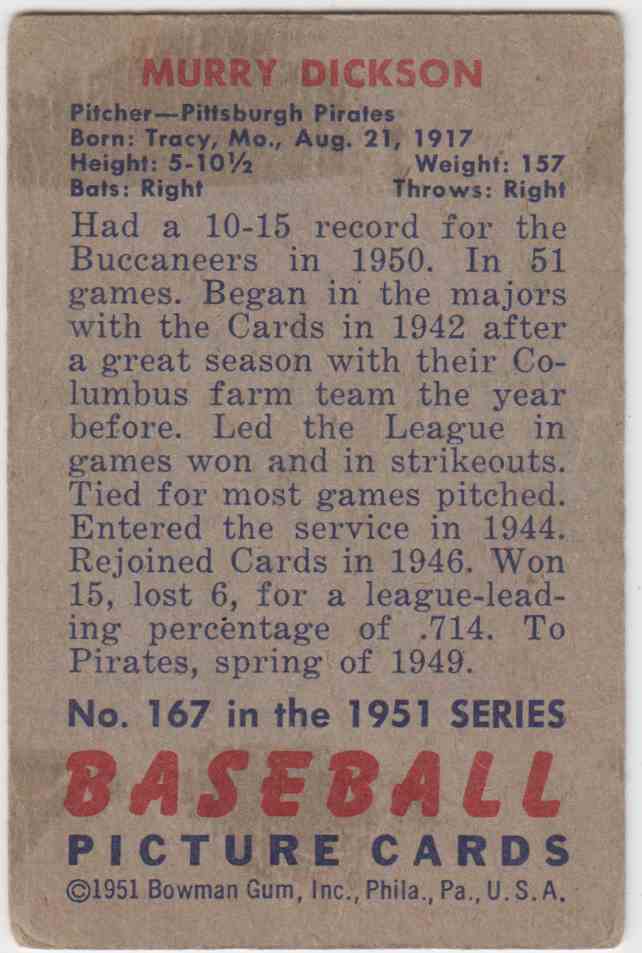 I picked this particular back scan because it has the gum stains that would often be found on cards back then and even many years later. As a very young and innocent child, I tried a piece of gum from a pack 1981 Donruss cards that probably should have been thrown away at least 15 years earlier. Spoiler alert: It was not good.

Having stats on the back of the cards wasn’t a common thing yet (it rarely happened before Topps came around), though the bios on the back of these cards gave some great info. This particular card notes his 10-15 record for the 1950 Pirates (not bad considering the team), followed up by the complete sentence of “In 51 games”.  The back talks briefly about his big league time before joining the Pirates, as well as a mention of his service during the war. It notes his strong 1946 season and gives a small hint about how he joined the Pirates. They actually spent big money to acquire him, picking him up in a straight cash purchase of $125,000, which is big for 1949 dollars in baseball. Dickson proved to be a valuable pitcher during his time in Pittsburgh, then they recouped some of their money ($70,000) when he was traded to the Philadelphia Phillies in 1954. You may have also picked up on his birthday being wrong. The date is correct, the year is not.

If you wanted to add this card to your collection, or start your collection with this card, it can be had for around $5-$8 delivered in decent shape ungraded. As always with older cards, a nice one could be costly. You can find a few PSA 8 versions on Ebay right now in the $60-$100 price range. There are a handful of PSA 9 ones around and they could cost $400 and up. Three examples are out there graded PSA 10. I don’t know any sales, but if you really wanted one and it came up for sale, it’s going to be $1,000+ and that “+” amount depends on the bidders. An 8 will look almost as nice and cost a fraction of the amount.