Almost two weeks ago, Pittsburgh Pirates outfielder Roman Mejias celebrated his 90th birthday. On that day, I looked at the boxscore from his best game with the Pirates and decided to put it on the Game Rewind schedule. Hopefully you saw that article this morning, but if you didn’t, you can find it here. Also while talking about Mejias back on August 9th, I needed a picture of him to use and I saw his 1959 Topps card, which really stood out to me. So I decided to do a doubleheader for the man from Cuba, who spent six seasons with the Pittsburgh Pirates. Today’s Card of the Day is that 1959 Topps Roman Mejias. 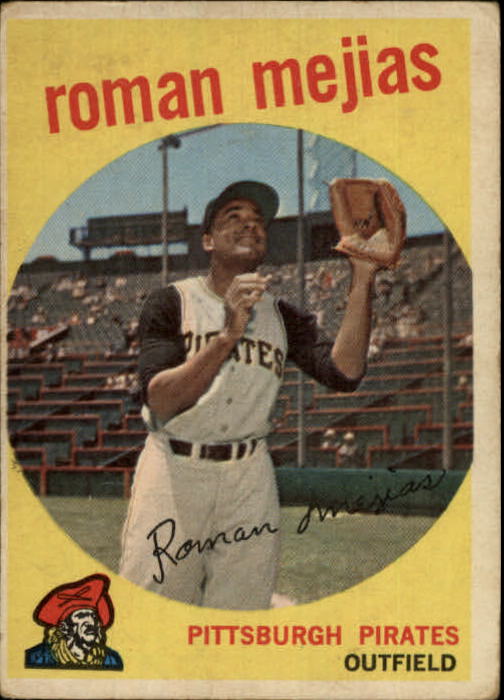 I like the staged action pose here, with a little bit of a smile on his face and about 15 fans in the stands. A similar pose would be used on his 1960 Topps card when they went back to the two-photo layout for the first time in four years. Most of the Pirates this year have photos in which they are looking just off to the side of the camera, but there are a few like Mejias and Bill Mazeroski that have a better staged photo.

Topps used a circle as the shape for the photo for the first time in 1959.  The yellow/gold border and red writing comes with many of the Pittsburgh Pirates players, but not all of them. A few have green, Vern Law has orange and three players got pink borders. All of the Pirates cards have the great old Pirates logo in the bottom left corner, with the team name and their position on the right side.  Topps also included a facsimile autograph this year, which isn’t on any of his other Pirates cards from Topps. 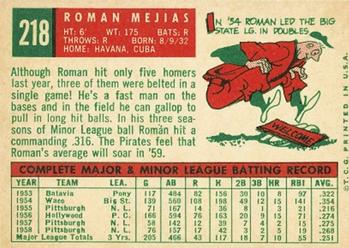 As you can see, the back of the card mentions his three-homer game, along with how unlikely it was coming from him. Topps also mentioned his speed, which was never a big part of his game. He stole 22 bases over 627 big league games. He stole 32 bases in the minors one year, but never came close to approaching that in any other season. His defense was also considered to be below average. The back predicted that he could hit for a much higher average in 1959. That’s a bold prediction, considering that a .268 average (his 1958 total) isn’t exactly bad. It turned out to be wrong. His average plummeted to .236 in 1959, and by 1960 he was a bit player in the background for the World Series champs. After barely seeing the majors in 1961, he joined the expansion Houston Colt .45’s and had his best big league season.

One other interesting thing on the back is his birth date. I mentioned up top that he just celebrated his 90th birthday two weeks ago. The month and day are correct on this card, but the year is off by two years.

Common cards from the 1959 Topps set can be had fairly cheap, especially if you don’t care about condition. You can get a nice example of this Mejias card for $3 delivered. As with all cards from 1959, if you want a high grade copy from a grading company, it will cost you. A recent sale of a PSA 9 Mejias (one grade away from a perfect condition card) sold for over $220. Another one in the same grade is for sale right now for $173 delivered.