I like to switch up the sets I use for this feature, but today seemed like a good day to go back to the 1982 Fleer set for a card I saw a few days ago. I just wrote about the 1982 Fleer Willie Stargell card. I used that one because I liked the image. It was something different. Early in the Card of the Day stages, I wrote about the 1982 Mike Easler card. One of the reasons was because Luis Tiant could be seen in the background and he didn’t have a Fleer card with the Pirates.  So this is the third  1982 Fleer article and again it’s a unique pose. Today’s Card of the Day features Pittsburgh Pirates catcher Steve Nicosia. 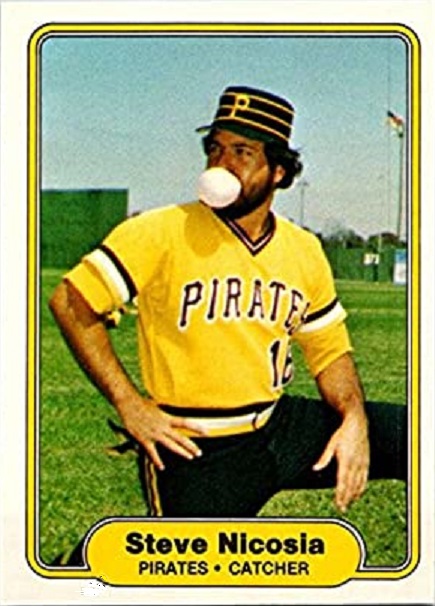 I wanted to match the Card of the Day up to the This Date article, which included the Pirates trading Nicosia to the San Francisco Giants on August 19, 1983. This is a 1982 card though and Nicosia looks like he’s modeling a Pirates uniform for Bazooka Joe Monthly, a magazine for chewing gum connoisseurs. I basically like almost any photo with the uniforms from that era and this is a great one. Black pants, gold top, pillbox cap. What more could you ask for in a uniform? I also like that the 1982 Fleer cards have the border/writing on front that matches the team colors. A nice touch throughout the set.

With Tony Pena starting most days, Nicosia played just 39 games during the 1982 season. He batted .280 in 100 at-bats, with one homer and seven RBIs. It was the third season in a row since 1979 that his playing time dropped. The Pirates actually gave a few starts to rookie Junior Ortiz at the end of the season, which cut into Nicosia’s time. 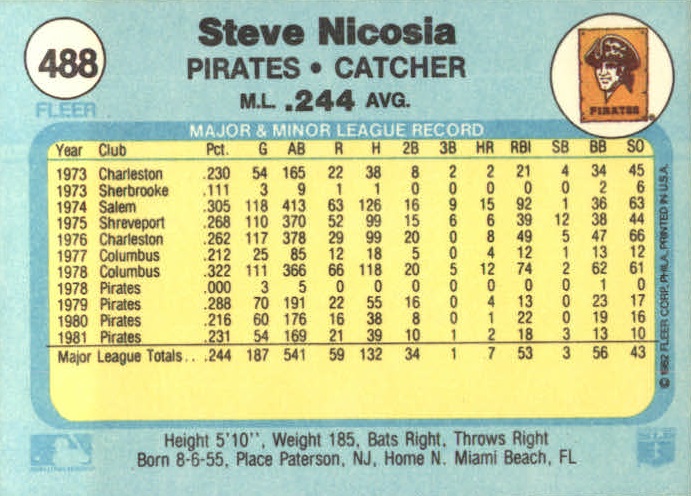 I love the backs of these cards because the colors they chose made it easy to read. Topps used dark green writing on a light green background, while Donruss had a nice white and blue combo, but they didn’t include full stats for anyone who had a long career. Fleer hit both spots with their full stats going back to the minor league days. With Nicosia in particular, you have six years of minor league stats. Check out that 1974 season in Salem, where he hit for average and some power, followed by that 1978 season in Triple-A, which shows why he was called up to the majors. I’m also a big fan of the old school Pirates logo in the top right hand corner, which is on the back of all of the Pirates cards in the set.

This card is a common and easy to find, especially if you want to add a unique pose. You can easily find it for $2 total, including the delivery. You might be better off buying the team set for just a few dollars more though and get the Stargell, Dave Parker, Bill Madlock, Johnny Ray, Tony Pena, Kent Tekulve etc etc cards included. There are a few people who have the team set on Ebay for $6-$8 delivered.