Today’s Card of the Day features one player from the Pittsburgh Pirates on a card with four players total. In 1977, like in many previous years, Topps put out cards of rookies and grouped them by position. They had years where they would group rookies by teams as well, but in the 1977 set, you would get a card like the one below. Four rookie outfielders, four different teams, one National League player and three from the American League. That NL player would soon end up in the AL, while one of those AL players would join the Pirates eight years later. 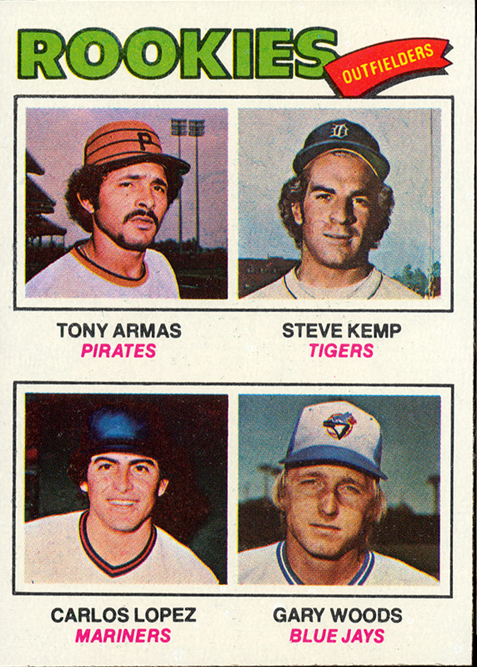 As you can see up in the left top corner, Tony Armas of the Pittsburgh Pirates is next to Steve Kemp of the Detroit Tigers. The card also includes Carlos Lopez of the Seattle Mariners and Gary Woods of the Toronto Blue Jays, two expansion teams that year. Our main featured player here is Armas, but Kemp also played for the 1985-86 Pirates. If you’re not old enough to remember Tony Armas, you might remember his son, Tony Armas Jr, who pitched for the 2007 Pirates. He pitched a total of 31 games for the Pirates, which was a little more time than his dad spent with the club.

Armas Sr. was an excellent choice for this rookie card, but he never got to prove that with the Pirates. He played just four games for the 1976 Pirates before being traded to Oakland in March of 1977 in a nine-player deal that brought Phil Garner to Pittsburgh. It helped the Pirates in the short-term with the 1979 World Series title, but they really missed out on some big years that they could have used during the 1980s. Armas led the American League in home runs twice, and drove in over 100 runs in two other seasons between 1980 and 1984. He was an above average outfielder at this time as well, but his peak performance was much better than the rest of his career. During that five-year stretch, he put up 14.1 WAR. Career he had 15.9 WAR in 14 seasons. 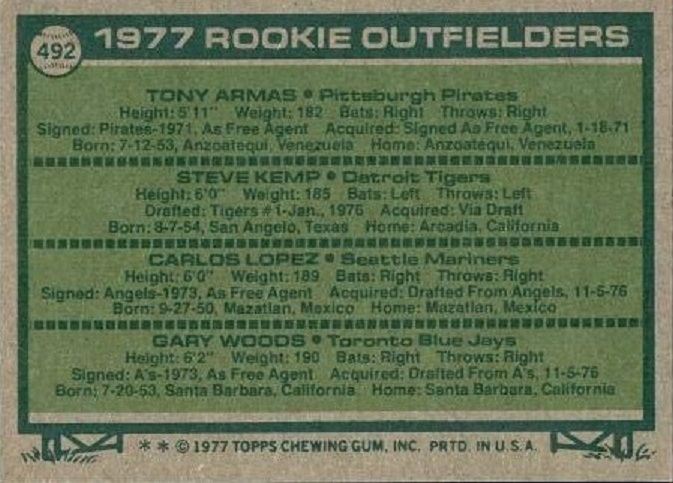 Due to the amount of players on the front of the card, the information on back is limited to bio and no stats. If you were in the hunt for finding good rookies back then, the other thing that helped you here was their age and the first round draft status for Kemp. Armas, Kemp and Woods were all young, but Lopez was already 26 years old, so that’s a little old for a rookie, but he was on an expansion team now, so there was a good chance to get playing time. There was no Baseball America on MiLB site to find minor league stats, and the availability of scouting reports was very limited.

Kemp had a strong start with Detroit, hitting .284 with 89 homers and 422 RBIs in his first five season, but he fell off quickly, especially in the power area. By the time he reached the Pirates at 30 years old, he was basically done as a big league player. He hit .246 with three homers in 105 games for the Pirates. Woods lasted nine years in the majors, though he was never more than a role player, topping out at 270 plate appearances in 1982. Lopez actually did quite well for the 1977 Seattle Mariners, accumulating 2.0 WAR. He was then traded to the Baltimore Orioles, where he played 109 games, then never played in the majors again. He went to Mexico for his final six years of pro ball.

This card can be purchased rather cheap on Ebay, usually in the $3-$4 range. Even high grade ones are very affordable, with a PSA 9 recently going for $15 delivered. The price of this card used to be higher back when Armas topped out at 43 homers and 123 RBIs in 1984, while Kemp was hitting .291 for the New York Yankees and rookie cards of everyone were gaining value at that time. It held its value for a short time, but with Armas and Kemp both crawling to the finish line in their career, the price dropped. Both were All-Star selections at their peak, so it’s still a very interesting card and two excellent choices by Topps. Woods played nine years in the majors and Lopez returned home to play in Mexico after his third season, so neither was a poor selection in retrospect. Topps had much worse selections for rookie cards over the years than either of those two players.