On what would have been his 86th birthday, we take a look at my favorite Roberto Clemente card. While I like some of the newer ones, such as the two (here and here) 2020 cards that we have featured for Clemente, I had to go for one from his playing days. While each of his cards from the 1955-73 Topps sets has its own great quality, the 1956 Topps card is my favorite. On a personal level, I always appreciated the cards that said “Roberto” on the front, as opposed to “Bob”, so that eliminates many of those sets from being my favorite. That includes the 1962 Topps, which is probably my favorite design from his playing days. The 1971 Topps card with those black borders are always nice looking, but there’s something about the 1956 Topps that really catches my eye. 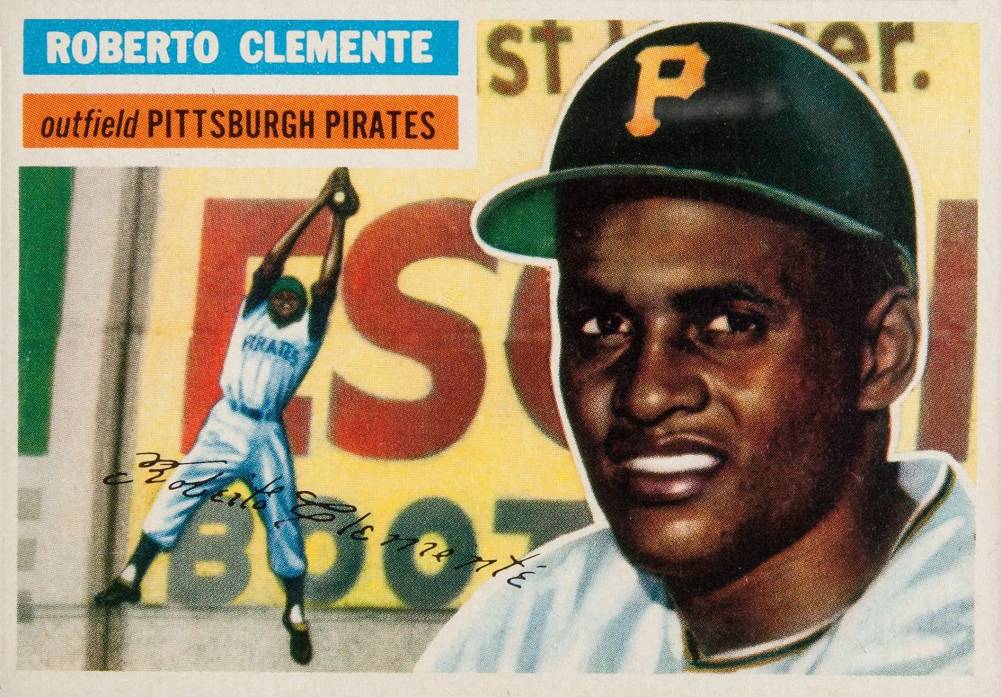 This card design isn’t much different from his 1955 Topps, which is his rookie card. Both picture a bigger portrait next to a smaller full body pose on the front. The real differences here that make this one better for me is the the poses and the backgrounds. The 1955 Topps cards have a plain, one color background behind the portrait and the pose. The 1956 Topps cards have action scenes and scenery behind the full body shot. The Clemente in particular has one of the best in the set (the Mickey Mantle card is a great one as well). Clemente is near the outfield wall, making a leaping catch in front of advertising signs. It’s a colorful background with a great action shot. The 1955 Topps, which is still a great card obviously, has Clemente in a batting pose. So this differences between the two cards in eye appeal (in my opinion) are fairly significant. 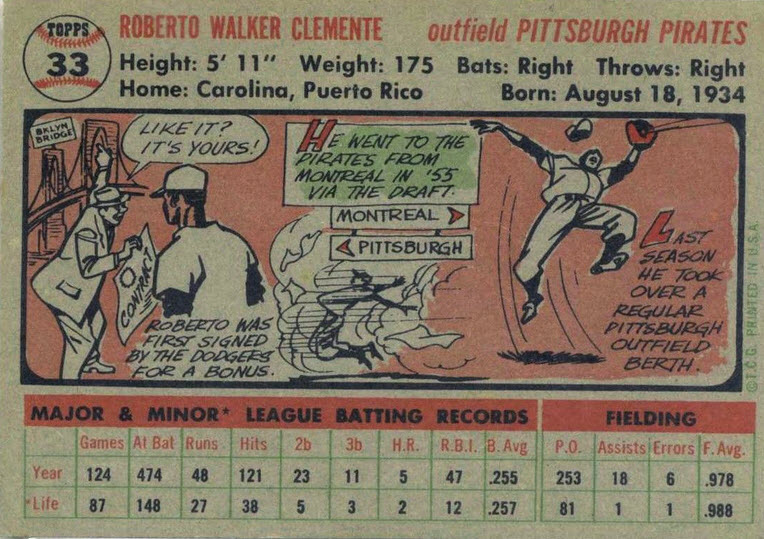 As you can see, the back has some cartoons that break down the early stages of Clemente’s career. The top stats are his big league stats, while the bottom stats are his 1954 minor league stats. The wording for his signing is a bit amusing. A representative of the Dodgers is holding an over-sized contract for him to sign, then insinuating that they were willing to give him the Brooklyn Bridge to sign. It then says “Roberto was first signed by the Dodgers for a bonus”. Yeah, everyone first signs for a bonus, could you be more specific maybe? It would be like saying that he got a uniform after signing. Then there’s some crazy cartoon showing him going from Montreal to Pittsburgh, followed by Clemente making a leaping catch in the outfield with his cap falling off.

Clemente’s rookie card is always going to be his most collectible, but now it’s out of the price range for many collectors. The 1956 Topps card can be had for much cheaper, though it’s still pricey, especially if you want a nice one. There is a bit of a variation available in this set, which you can find throughout the set. They can either be found with gray or white backgrounds on the back of the card. The above version would be the gray one and is tougher to find, though there is very little difference in value. A PSA 7 Clemente is worth about $1,000, with numerous Ebay sales in that price range recently. The price of a PSA 8 jumps significantly, and anything better could be in the five-figures. If you just want one and condition isn’t important, you can get it ungraded for under $100.