We haven’t had a Prospect Throwback article recently, and I have a few more sets to cover, so today seems like a good time to look at a favorite of mine. If you missed the previous installments of this series, we take a look at an old Pittsburgh Pirates minor league team set and highlight the interesting players and cards from the set. Today’s set is the 27-card 1986 Watertown Pirates set put out by ProCards. It has a “big three” for name recognition, and many other cards of interest.

Watertown was not a good team in 1986. They finished with a 30-48 record in the New York-Penn League. The win-loss record in the minors isn’t as important as developing prospects and this club sent a total of seven players to the majors. Five of those players are represented in this set and they are covered below. The other two who didn’t make the set were Orlando Merced and Stan Belinda. It’s still a nice set without those two because there’s some name power among the coaches, including the manager, who has a World Series ring with the Pirates.

I’ve broken the set down into six photos, starting with the “big three”, then a group of Major League players, coaching staff, high draft picks, random interesting cards and a group shot of the rest. Here they are:

This group is obviously the big three. You have three MLB players with varying degrees of success, from Jeff Banister’s 1.000 career average, to Ed Ott’s contributions to the 1979 World Series champs, to Moises Alou’s outstanding career that would have been Hall of Fame worthy if he just stayed healthy more often.

Ott played until 1984, spending those final two seasons in the minors. In 1985, the Pirates hired him to manage Prince William, where he had a 65-74 record. He then moved to Watertown for one season and was in charge for that 30-48 record. He later had three seasons of managing in independent ball and his teams did poorly all three years. So the success on the field never translated to the dugout, at least not in the win/loss columns.

Banister had some success as a manager, including the 2015 AL Manager of the Year award with the Texas Rangers. He also managed for five seasons in the minors with the Pirates. His big league career consisted of just one pinch-hit appearance in 1991, but it was memorable. He singled off of veteran pitcher Dan Petry, while batting for Doug Drabek.

Alou was used as trade bait to acquire Zane Smith. It was a deal that worked out short-term for the Pirates, but looked bad in the long run. They didn’t miss Alou until three years later when they were starting their run of consecutive losing seasons and he had his first big year in the majors. Obviously most of his success would have happened elsewhere after he left Pittsburgh via free agency, but they still could have used those mid-90s seasons. Alou was a .303 hitter career, with 332 homers and 1,287 RBIs, despite missing two full seasons and plenty of other time during his career. He played just two games with the Pirates before they traded him in 1990.

The rest of the Major League group includes pitchers Mike Walker, Bill Sampen and infielder Tommy Shields. Walker was a second round pick in 1986, who didn’t quite pan out. He was traded to the Seattle Mariners in 1989 in a deal for Rey Quinones and Bill Wilkinson. Walker made it to the majors in 1992 for three starts and two relief appearances. He went 0-3, 7.36 in 14.2 innings.

Shields was originally drafted in the 36th round out of Notre Dame by the Pirates, but he didn’t sign. They took him 21 rounds earlier the next time and he signed. The Pirates eventually traded him for minor leaguer Tony Beasley (you might know him as a recent minor league coach for the Pirates). Shields played two games for the 1992 Baltimore Orioles and 20 games for the 1993 Chicago Cubs, which was his entire big league career.

As you can see from the group of five future MLB players who made it into this set, they played a total of three games with the Pirates. The players who didn’t make it there for picture day (Merced and Belinda) were obviously around much longer. 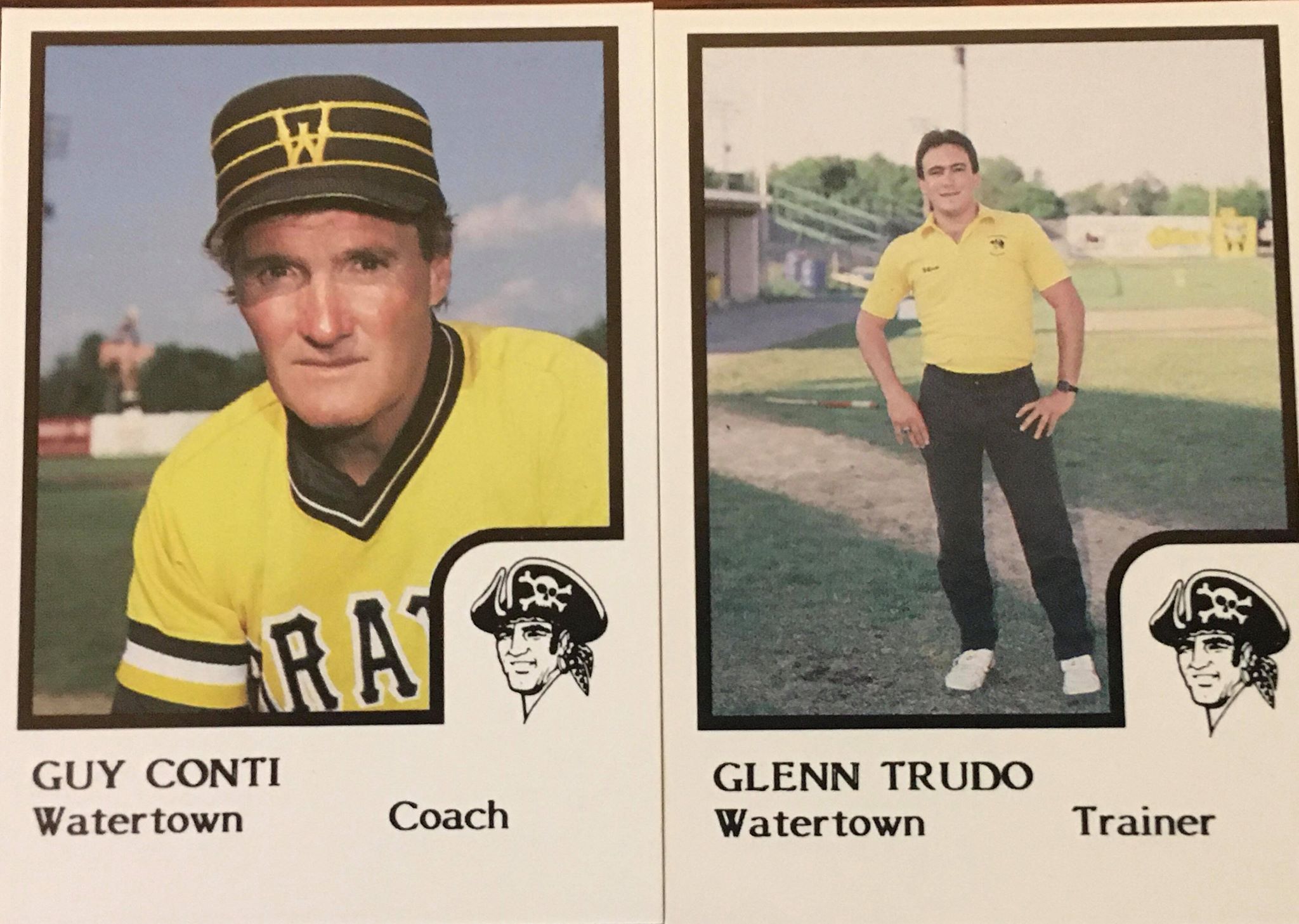 Guy Conti was the pitching coach and a native of Pittsburgh, PA. He’s still in baseball now as a senior adviser with the New York Mets. He has held various coaching roles over his lifetime, spending many years with the Los Angeles Dodgers. He was with the Pirates from 1983 until 1986, spending most of that time as a scout.

Glenn Trudo was the team trainer. He was mentioned in our 1987 Macon Prospect Throwback article, and he’s in another set that we have for a future article in this series. This is his first card with the Pirates. If you’ve never collected minor league cards, it’s common to see a trainer card in these sets. 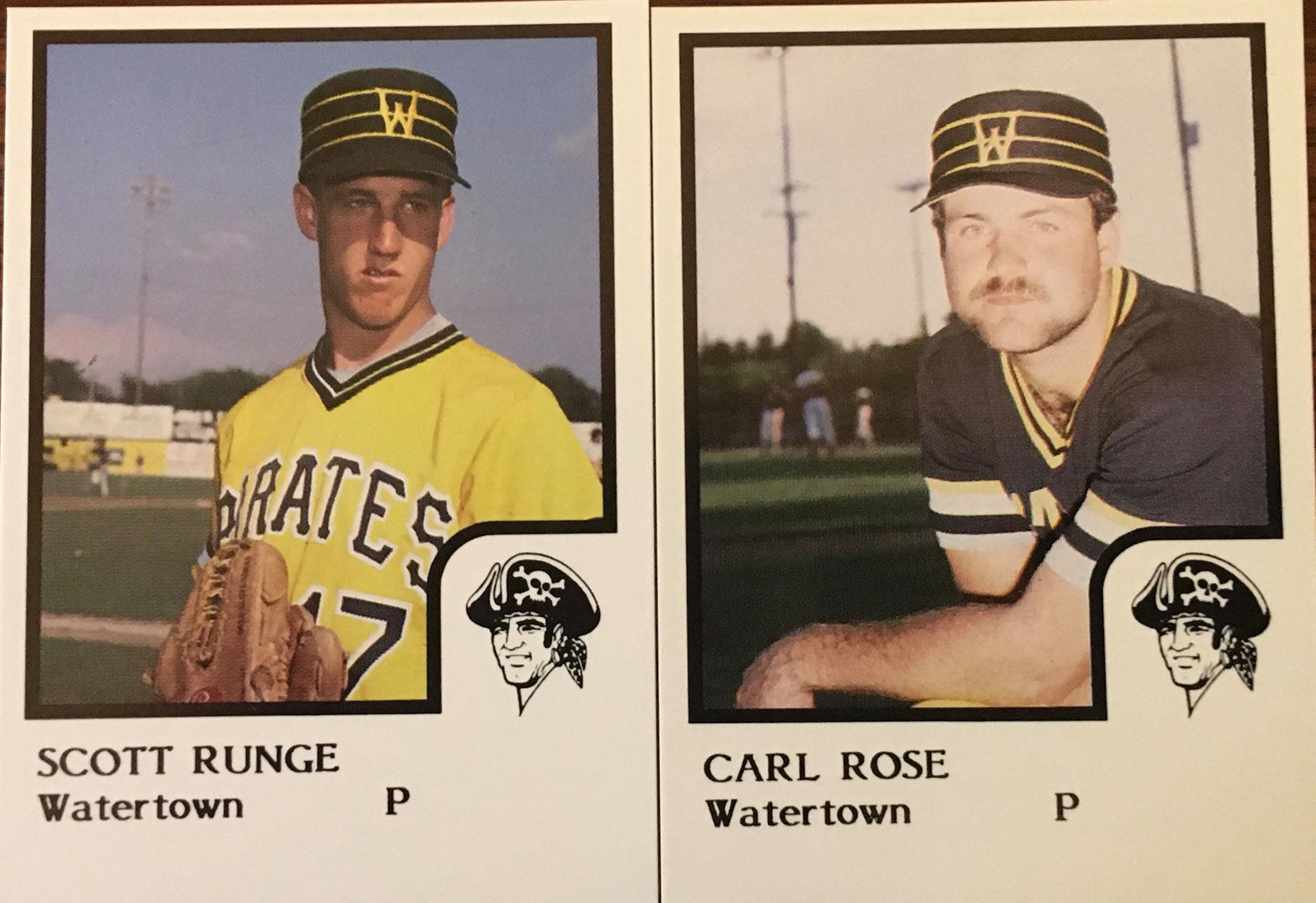 Runge had a strong debut, with a 2.89 ERA for Watertown in 37.1 innings. He was back at the same level in 1987, which was obviously disappointing, but then made a jump to Double-A by the end of 1988. That would be where he would top out in his four-year pro career, which ended with the Seattle Mariners in 1989.

Rose pitched nine times for Watertown in 1986, but he also played first base. For a second round pick, his career was over in a hurry. He was done by 1987, but he still went on to have a great career swinging the bat. He is a Hall of Fame softball player, with over 2,400 home runs to his credit. Unfortunately, he passed away at age 54 just last month.

Here’s the group of cards I deemed as interesting subjects.  Pitchers Daryl “Sleepy” Boyd and Tim Kirk, along with outfielder Lawrence Brady. The Boyd card isn’t just here because he fell asleep during the photoshoot. He was drafted in the second round in 1984 by the Minnesota Twins and third round in 1985 by the Chicago Cubs, but he didn’t sign until after the Pirates took him in the 27th round in 1986. He lasted four seasons in pro ball, topping out at High-A.

Kirk pitched well for three seasons with the Pirates, but he topped out at Double-A, with poor results during a brief stay. He’s here because he’s still involved in baseball, coaching at the Carolina Baseball Center currently.

Brady made it because he was an outfielder who was tried out as a pitcher, though it was an unsuccessful trial. He played two seasons at Watertown, his only pro time, and had a .162 average and a 13.50 ERA. 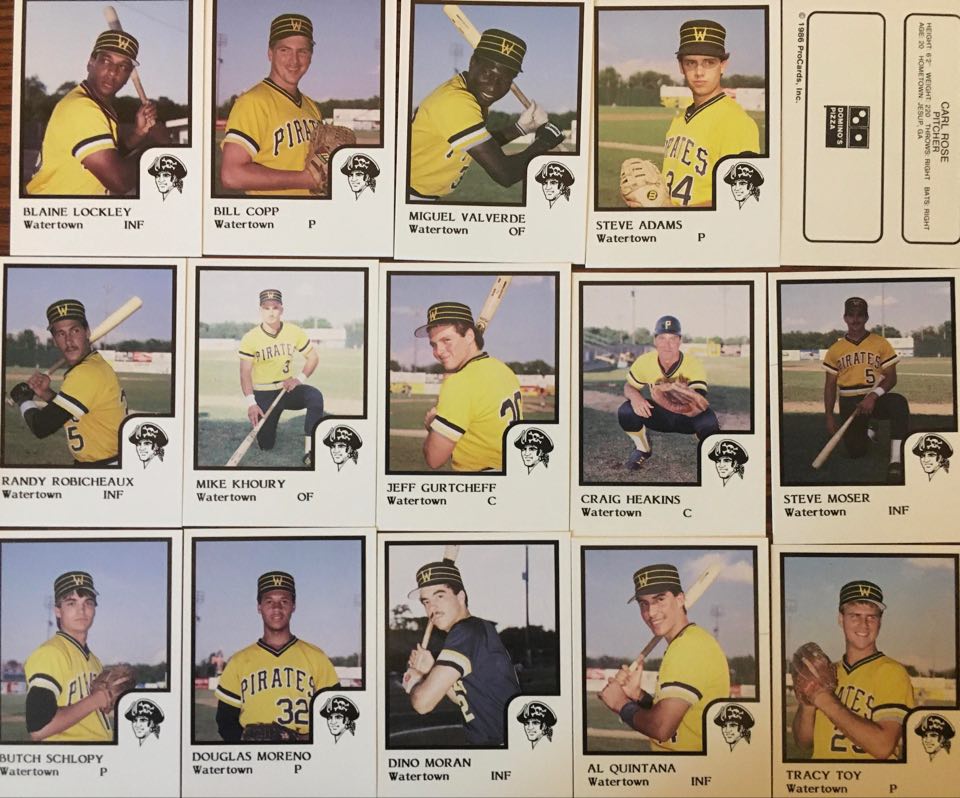 Here are the rest of the cards in the set, with a back example brought to you by Domino’s.