In today’s Game Rewind, we go back to the early parts of the 1974 season when it seemed unlikely that the Pittsburgh Pirates would make the playoffs. On June 9th, they were in San Francisco with Jerry Reuss on the mound. The Pirates had a 19-32 record at the time. The Giants held a 30-29 record, but their starting pitcher was Ron Bryant, who was in the early parts of one of the worst drop-offs in big league history. Bryant led the National League with 24 wins during the 1973 season. Coming into this game, he was 2-5, and things got worse from there. He finished the year 3-15 and he didn’t get his third win on this date against the Pirates. Instead, the Pittsburgh bats put a hurting on him and four relievers.

This was a Sunday day game at Candlestick Park, with a meager crowd of 8.786 fans in attendance. The Pirates had just placed young outfielder Dave Parker on the disabled list. He was replaced by another young outfielder named Ed Ott, who was being called up to the majors for the first time. You obviously know Ott as a catcher, but he didn’t start catching full-time until 1975, and he even nixed the idea from the Pirates front office that he take up catching in 1974. It ended up being a wise decision not to stick to those guns.

The Pirates came out of the gate hot against Bryant, who was having some trouble throwing strikes this day. He walked Rennie Stennett and Gene Clines to start this game, then Richie Zisk deposited one over the right-center field fence for a 3-0 lead before Bryant recorded an out. That would end up being all that the Pirates would need on this date, though they piled on plenty of insurance runs.

In the bottom of the first, Jerry Reuss gave up a lead-off infield single to Bobby Bonds, before getting a double play and a strikeout to get out of the inning quickly. You knew it was going to be a bad day for Bryant when Mario Mendoza and Reuss started the second inning with back-to-back singles. After picking up the first out, Bryant hit Clines to load the bases and that ended his day. He was bailed out by reliever Jim Barr, who got a strikeout and a ground out to strand three runners.

Reuss worked around another lead-off single in the second inning to keep it 3-0. The Pirates lost a chance to add to their lead in the fourth. Bob Robertson doubled to start the inning. He moved to third base on a ground out by Manny Sanguillen. Richie Hebner flew out to left fielder Gary Matthews, who cut down Robertson at the plate to end the inning.

Reuss recorded the first out in the third, though that was followed by a double from reliever Jim Barr. The Giants were unable to get him home, keeping it 3-0. The fourth inning was quiet, with the Pirates going down in order and Reuss working around a lead-off double by Garry Maddox.

In the fifth, Richie Zisk hit a one-out double. The Giants intentionally walked Willie Stargell, then retired Bob Robertson for the second out. That was followed by an RBI single from Manny Sanguillen and an RBI double by Richie Hebner, though Sanguillen was thrown out at the plate to end the inning. The Giants went down in order in the bottom of the inning and the Pirates led 5-0 after five frames.

In the sixth Jim Willoughby came on to pitch for San Francisco and was greeted with an error by his shortstop on the first play. After recording two outs, the Pirates lit into Willoughby. Gene Clines and Richie Zisk singled to load the bases. Willie Stargell came up and lined a grand slam into the right field seats. It was his first home run in three weeks. Don McMahon replaced Willoughby and Bob Robertson followed with a solo shot to make it 9-0.

The Giants had two singles in the sixth, but couldn’t get a run across the plate. The Pirates went quietly in the seventh, with a dropped fly ball out in left field keeping it from being a 1-2-3 inning.

Reuss had a rough seventh inning, though it only resulted in one run. He walked one batter, then gave up three straight singles. A double play got him out of the inning with minimal damage.

Mario Mendoza and Jerry Reuss led off the ninth with ground outs to second base, making it seem like a quick inning was going to happen. Rennie Stennett followed with a double, then Gene Clines walked. Richie Zisk came up and lined a ball into the right-center gap. After the game, Zisk said “When I got near second base there was no way I was stopping there. They would have had to shoot me to stop me”. The reason for his mad dash in the ninth inning of a 9-1 game was simple. He homered in the first, doubled in the fifth and singled in the sixth. He was intent on getting that triple and he did just that. 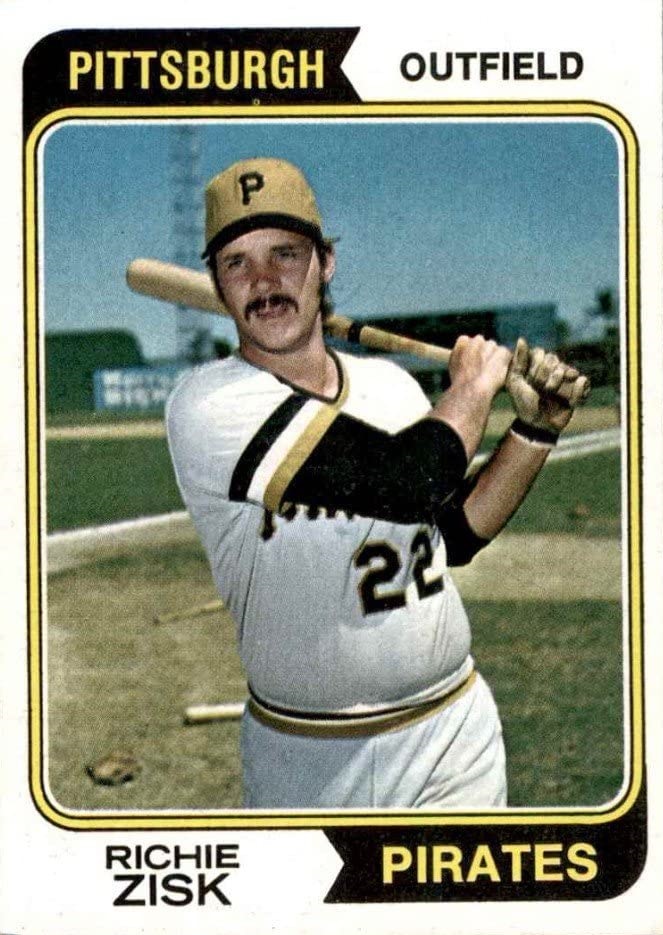 Zisk collected the Pirates first cycle in ten years, since a young Willie Stargell accomplished the feat back on July 22, 1964. It ended up being the only MLB cycle during the 1974 season. Speaking of Stargell, he wasn’t done for the day. He followed Zisk with a two-run homer, hit 425 feet to straight away center field. That gave him two homers and six RBIs on the day. He also added a double earlier in the game.

The Pirates were up 14-1 and Reuss still needed to finish out his day. He had an easy 1-2-3 inning against the bottom of the San Francisco order. That gave him his fifth win of the season. It wasn’t the best final line, but it was certainly effective. He allowed ten hits, walked one and struck out two batters. Everyone in the Pirates lineup had at least one hit in this game. Zisk finished with four runs scored and five RBIs.

After the game, the Pirates noted that the Giants gave them permission to hold batting practice after Saturday’s game was over. Among the players who thought they needed extra swings was Stargell. The move obviously paid off for the Pirates and had the media second guessing the decision by the Giants to allow their opponents to have a post-game batting practice.