Today’s Card of the Day comes with a book recommendation as well. Lee Mazzilli played 14 seasons in the majors, including four seasons (1983-86) with the Pittsburgh Pirates. Today we feature his 1986 Topps card, which was mentioned in the recently released book called The Wax Pack: On the Open Road in Search of Baseball’s Afterlife. After a brief look at the card, we have a book review of The Wax Pack at the bottom of the article. The book was written by Brad Balukjian, while the review comes from John Fredland, who was a contributor on Pirates Prospects and recently wrote a game recap for John Candelaria’s no-hitter, which can be found in our August 9th “This Date in Pittsburgh Pirates History” article.

Here’s the front of the 1986 Topps Mazzilli: 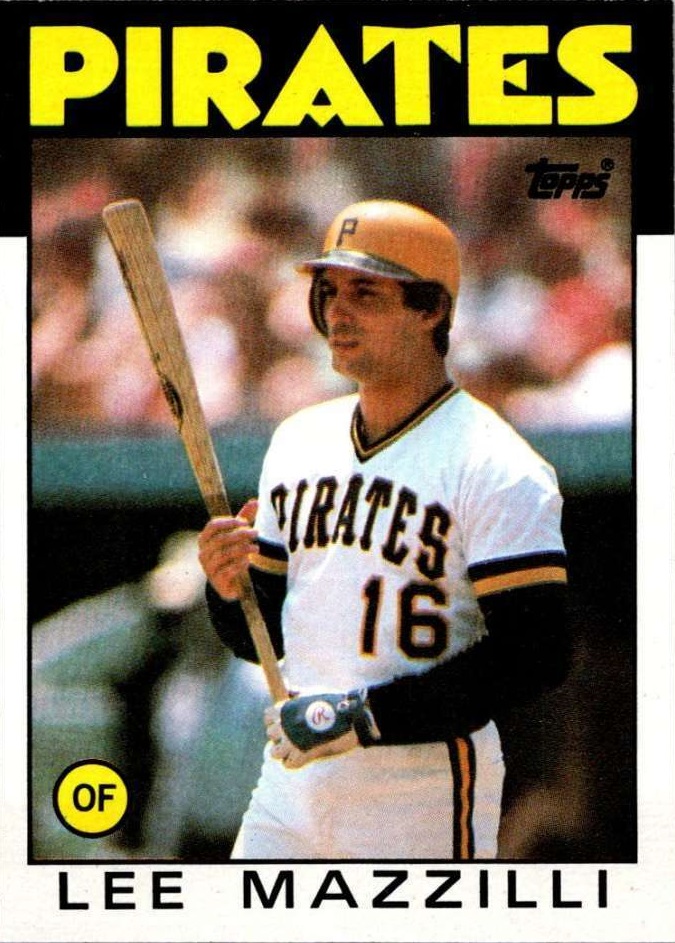 As you can see, the 30-year-old Mazzilli appears to either be in the batting circle or at the plate looking down at the third base coach for a sign. If I had to guess, I’d say it’s the latter because there’s no batting donut on the bat. He’s wearing the home whites from the 1985 season. I’ll point out that Mazzilli is listed here as an outfielder, but he barely set foot in the outfield in 1985. He made three starts and twice came in late on defense, giving him a total of 34 innings in the outfield. He mostly played first base when he was on defense, but more often than not, he was used as a pinch-hitter. He had an .812 OPS in 72 pinch-hitting appearances in 1985. 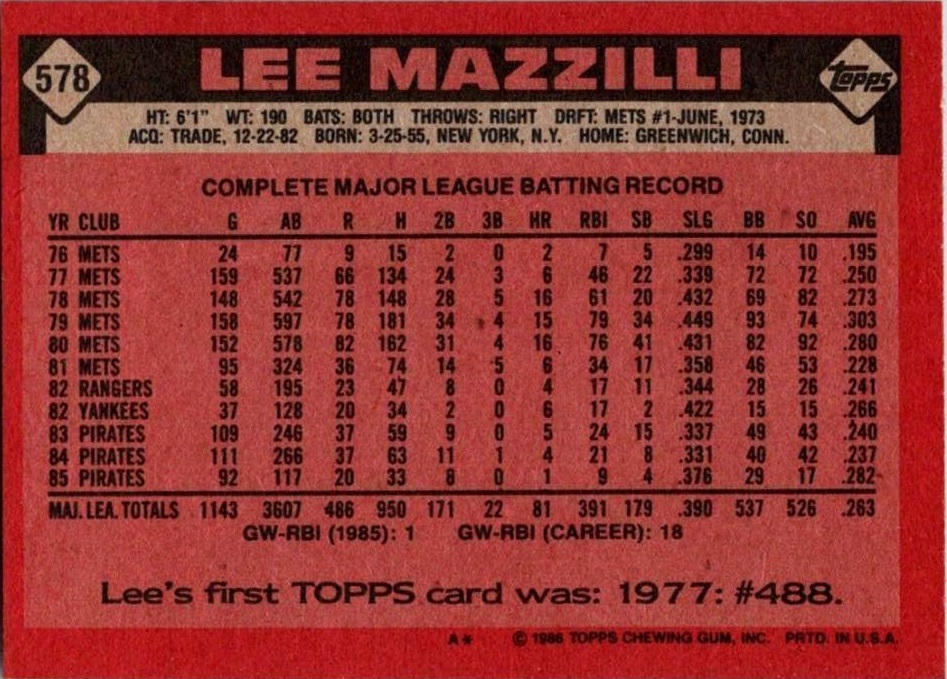 The back has ten years of big league stats for Mazzilli, which was his entire career up to that point. The random fact at the bottom notes his rookie card from Topps. Mazzilli showed a nice walk rate during his career, with more free passes than strikeouts at that point. He finished his career with 15 more walks than strikeouts. You can also see that he displayed some pop early in his career and he also had some speed. It’s no surprise that he became a bench player later in his career. That bat was solid, but he put up negative defensive WAR in all 14 of his big league seasons. I’ll also note that Topps kept track of Game Winning RBIs for a few years just below the stats. Mazzilli had one in 1985 and 18 in his career up to that point.

This Mazzilli card is a common from a set that was mass produced. Topps and other companies really kicked the print numbers into high gear in 1987, but it’s not difficult to find 1986 Topps, they’re just harder in comparison to cards that saturated the market. You can get the Mazzilli card off of Ebay in great shape for $1 or $2 with shipping included. There’s even one graded PSA 8.5 on Ebay for $5.99 with a best offer option. With that card, you’re basically paying extra for the fancy case. Mazzilli was traded to the New York Mets during the 1986 season, so this was his last card with the Pirates.

Review of The Wax Packs from John Fredland:

The Wax Pack: On The Open Road In Search Of Baseball’s Afterlife

With antecedents in baseball-bookshelf highlights like Lawrence Ritter’s 1966 oral history The Glory Of Their Times, Bob Wood’s 1988 stadium travelogue Dodger Dogs To Fenway Franks, and Josh Wilker’s 2010 baseball card rumination Cardboard Gods, first-time author Brad Balukjian sets out in The Wax Pack to explore “baseball’s afterlife” with 15 former major-league baseball players, selected via a random wax pack from Topps’ beautifully utilitarian 1986 card set. As one might expect from a wax pack array, Balukjian covers a variety of players, ranging from a Hall of Famer (Carlton Fisk) and a major 1980s star (Dwight Gooden) to the more obscure (such as Jaime Cocanower, who pitched in 79 games for the Brewers between 1983 and 1986).

But The Wax Pack is less about the players’ respective on-field accomplishments than their overall life experiences, especially in life after baseball. The book’s best parts result from Balukjian’s more personal interactions with players, including joining Cocanower’s family’s Independence Day celebration, watching Kung Fu films with Garry Templeton, and exploring dating apps with Steve Yeager. (An interesting subplot is Balukjian’s attempts, as a novice baseball writer, to connect with the players in the first place—culminating in a Florida real estate caper in hopes of meeting Carlton Fisk.)

Balukjian’s wax pack included two players with Pittsburgh connections: Lee Mazzilli and Richie Hebner. The 1986 Topps set depicted Mazzilli in a Pirates uniform; his tenure in Pittsburgh ended that July. Hebner, more fondly remembered in Pittsburgh, had played his final major league game when his 1986 card, featuring him in a Cubs uniform, came out in time for Christmas 1985. The book’s conclusion finds Hebner, known during his major-league career for his offseason work as a gravedigger, still “driving a hearse”—a befitting occupation for a study of baseball’s afterlife.