On April 24, 1885, the Pittsburgh Alleghenys and the Cincinnati Red Stockings played a game that the local Cincinnati newspaper called “the most remarkable game ever played in Cincinnati”. The Red Stockings finished the 1885 season in second place, one spot ahead of the Alleghenys. The two teams were nearly even over the course of the season and this game was a closely played contest throughout.

The Alleghenys sent pitcher Ed “Cannonball” Morris to the pitcher’s box for his third start of the season. He was just three days removed from a 4-3 win in 13 innings over Louisville.  The 22-year-old lefty won 34 games as rookie in 1885 for Columbus, before being acquired over the off-season by Pittsburgh. The Red Stockings countered with 27-year-old Gus Shallix, a right-hander born in Germany, who didn’t know at the time that he was just five weeks away from his final big league game.

This was a Friday afternoon game, with 1,800 people present who would witness “such excitement that was never experienced on the grounds”. The Grounds being League Park, which is where Cincinnati played their home games. While this game was played in Cincinnati, there were no rules in place to say that the home team had to bat in the bottom of the inning. In fact, they batted in the top of the inning quite often.

The Red Stockings were up first on this day and they struck early, scoring two runs off of Morris in the first inning. The Alleghenys got back a run in the bottom of the second. Cincinnati took back their two-run lead in the fourth with a solo run. Then the back-and-forth scoring continued into the fifth, sixth and seventh innings. Pittsburgh made it 3-2 in the fifth, then the Red Stockings added two in the sixth for a 5-2 lead. The Alleghenys struck next with a run in the seventh. Morris held the Red Stockings scoreless in the eighth while the Alleghenys chipped away in the bottom of the frame with a run.

In the bottom of the ninth, Pittsburgh was down to their last out, trailing 5-4,  with no runners on base. Fred Carroll drew a two-out walk, then back-to-back hits by Bill Kuehne and Fred Mann tied the score. Gus Shallix retired shortstop John Richmond for the final out of the inning, sending it to extra innings.

After going back-and-forth with the scoring, neither team had any success early in extra innings. Shallix began to wear down, and after the 12th inning he was replaced by right fielder Pop Corkhill, who exchanged positions with Shallix. Corkhill was an outfielder by trade, but he was a reliever throughout the 1885 season for the Red Stockings, during a time in which it was rare to see someone not finish a game. Shallix reportedly had a sore arm coming into the day, which is why he was “limited” to 12 innings of work this day.

The Alleghenys had no luck against the new pitcher. Corkhill was fairly new to pitching at the time of this appearance (he had one outing in 1884), but you couldn’t tell from watching. He was becoming a local hero with every scoreless inning according to the press, and he held the Alleghenys without a hit in the 13th, 14th and 15th innings.

In the 16th inning, Morris seemed to be losing steam. After retiring the first two batters, he gave up a single to slugging first baseman John Reilly. A  stolen base put Reilly in scoring position and Hick Carpenter came through with an RBI single to break the 5-5 tie. After retiring future Hall of Famer Bid McPhee, Pittsburgh had some work to do in the bottom of the 16th.

Lead-off hitter Tom Brown went down swinging against Corkhill for the first out. Pop Smith, in a battle of Pops, came out the victor with a single. Fred Carroll followed with his own single, then Bill Kuehne singled. With the help of two misplays by the Red Stockings and a Fred Mann single, Carroll came in to score the winning run. It took three hours during an era when games rarely took longer than two hours, but the Alleghenys were able to secure a victory.

Morris pitched the entire game, giving him a total of 38 innings during the first week of the season. In 1885, he led the American Association with 298 strikeouts, setting an Alleghenys record that he broke the next season, though it still stands as the second best season in franchise history. So knowing that, it might be hard to believe that he barely helped that season total in this game. In 16 innings, he picked up two strikeouts. Hall of Fame Bid McPhee managed two hits against him in seven at-bats, including the only double of the entire game. The only other extra-base hit was a triple by Jim Field, Pittsburgh’s first baseman. That was the only triple he hit with the Alleghenys. His 29 put outs in the game was reported to be a record for a single game at the time. All 18 starters played the entire game, which would be significant now, but not in 1885. 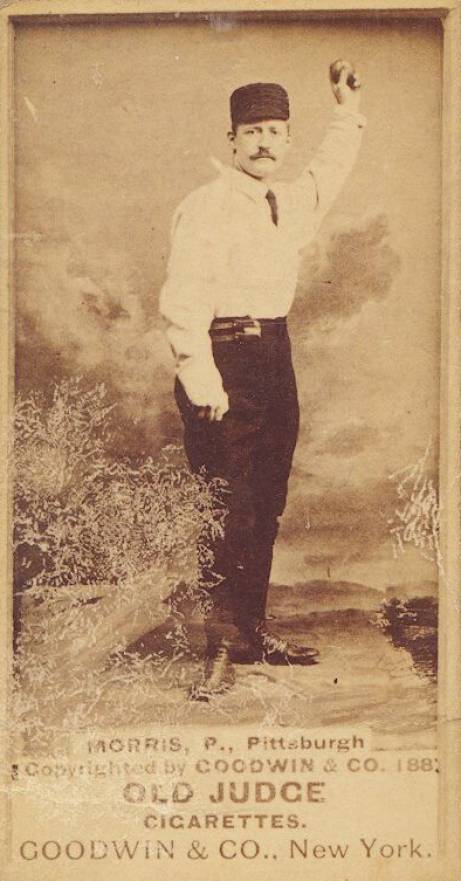 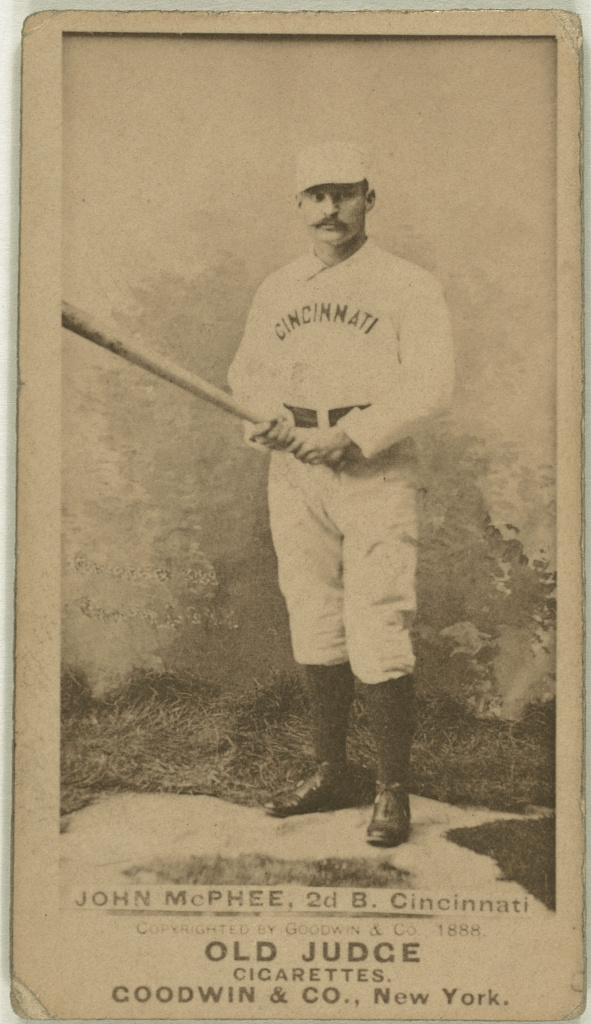 Left fielder Art Whitney, who only played that position three times in his 11-year career, had just one put out all game. The Red Stockings didn’t have a single put out in right field between Corkhill and Shallix.

Here’s the boxscore from the day. The “T” stands for at-bats, or times at the plate, though it only included official at-bats. The boxscore also includes runs (R), base hits (B), put outs (P), assists (A) and errors (E). For those who are new to 19th century baseball, note that there was one umpire, Mike Walsh, who umpired for parts of 11 seasons in the majors. 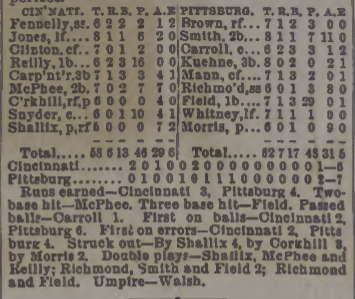