Today’s Card of the Day comes from the most popular set of the pre-war era, the 1909-11 T206 set. It’s the same set that has the famous Honus Wagner card that now regular sells for over $1,000,000. Besides Wagner, the Pittsburgh Pirates had two other Hall of Famers in the set. Manager/left fielder Fred Clarke has a portrait and a batting pose in the set, while pitcher Vic Willis has a portrait card. 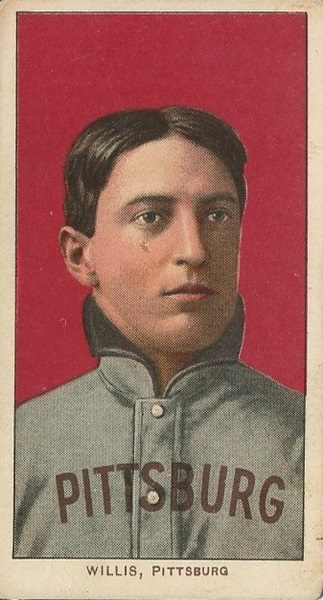 This card shows Willis from an earlier photo, with the word “Pittsburg” written across the chest. The fronts of the uniforms were blank at this time, so that city name was a little addition put in by one of the artists. The spelling of Pittsburg/Pittsburgh is correct for the time period that this card was released.

The T206 set is still widely popular to this day. It’s estimated that the American Tobacco Company printed over 20,000,000 cards during the run of this set. The name comes from the catalog number of the set, which was figured out many years after the set was produced. The “T” stands for a group of tobacco card sets, while the “206” was just the next number in line when it was cataloged. They had a total of 16 cigarette/tobacco brands that were advertised on the back of these cards, though the Ty Cobb brand of tobacco only came with one card in the set and has some subtle differences, leading some collectors to believe that it’s not part of the T206 set.

This particular Willis card was part of the first series, called the “150 series” cards, and he was also part of the “350 series”. His card can be found with five different brand backs and a total of ten different back variations. Some of the backs had minor differences in the factory numbers on the back, while the same brand could have “150 subjects” and “350 subjects” on the back and they’re considered two different backs. His most popular brand back would be the Hindu version, which is the toughest brand available for him.

The most popular brand back is the Piedmont, which is shown here.

For 86 years, this card has very little value. Once Willis was elected to the Hall of Fame, the prices on his T206 cards immediately increased. He has two other cards in the set, both picturing him with St Louis in 1910. He has a pitching pose on one and he’s holding a bat on the other. This portrait card with Pittsburgh is his most popular card in the set and prices reflect that fact. Recent sales have his cards going for $150 in GOOD (graded 2) condition, while a VERY GOOD example (graded) sold for $190. The nicer you find, the bigger the jump in price. The higher grade examples will sell for over $1,000.