Today’s Card of the Day is one from the 1961 Post cereal set, which came on the back of boxes of cereal and had to be hand-cut. We feature card #140, showing Pittsburgh Pirates pitcher Wilmer Mizell, who was referred to often as “Vinegar Bend” during his career.

In 1961, Post decided to make a 200-card set, featuring the best baseball players of the day. The cards were printed on the back of cereal boxes, with six cards on the bigger boxes and one card on the small boxes. There were a total of ten different Post cereal brands that carried the cards. The interesting part about the way the cards were distributed is that you knew right away who you were getting. If you found a box with Roberto Clemente on the back, you’re probably taking that one, which meant the good players probably sold out quicker, especially in their home areas. Mickey Mantle and Willie Mays cards probably didn’t last long on the shelves, especially not in New York and San Francisco. You can also mail-in for a ten-card sheet that came with perforated cards, so they weren’t hand-cut, but they also weren’t printed on as thick of a stock as the cards on the box.

Mizell joined the Pittsburgh Pirates during the early part of the 1960 season and he went 13-5, 3.12 in 23 starts over the rest of the season. He struggled in the World Series, but he helped the team get there in the first place, so he had plenty of value to the Pirates. He remained with the club until the early part of the 1962 season when he was traded to the New York Mets. I’m actually featuring Mizell today because he was born 90 years ago today. You can read more about him in today’s This Date in Pittsburgh Pirates History article.

Here’s the card, which is blank on the back. 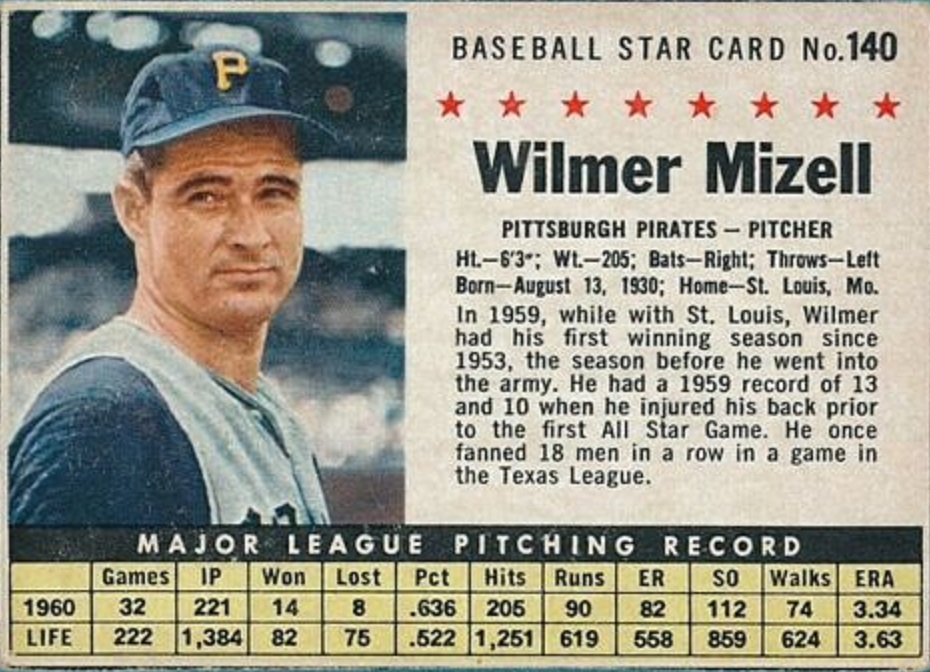 As you can see, the card lists one year of stats (1960), as well as the lifetime stats. Mizell began the 1960 season with the St Louis Cardinals, so the stats you see there are his total stats for the season. Each of the Post cards has a brief bio of the player, as well as their picture on the left side of the card. Mizell got his nickname from the town of Vinegar Bend, Alabama, which is a small town next to where he grew up. Wilmer “Leakesville” Mizell doesn’t have the same appeal, so his hometown didn’t work as a nickname.

Post claims to have printed 400 million trading cards in 1961, which means that an average of 2,000,000 were printed of each card. It’s an average, because some cards were short-printed. That’s a huge amount, though obviously not every card was kept by the person who bought them. People who had no interest in cards, still bought their favorite cereals and those cards were thrown away. Over the years more have been lost to attrition because every old collector has a story about their mom throwing away their collection. My dad could tell a good story here, and he probably had the 1961 Post Mickey Mantle card as well.

That large printing number means that the cards are relatively easy to find, and the fact that they had to be hand-cut means that many are in rough shape. You can find many options on Ebay for this card that are available for under $10 delivered. Some have even sold for less than $5 with shipping. Even a high grade one (PSA 8.5) sold recently for $37. This particular card gives you an affordable option to acquire a card for one of the best baseball nicknames.