The 1947 Pittsburgh Pirates had a rough season. They were 63-91 in 1946, but then they added future Hall of Famers Hank Greenberg and Billy Herman to the mix in 1947. That combo led to exactly one more win. Greenberg had a strong season, as did Ralph Kiner in his second year of pro ball. Herman, who was a player/manager, barely played and was fired right before the season ended. In the middle of that 62-win season, the Pirates took on the Cincinnati Reds at Forbes Field in front of a very small crowd and they put a beating on the opposing pitching by using small ball then entire game.

August 5th was a Tuesday and it was a day game in the middle of the summer. Just 6,229 fans showed up, which included large groups of children brought in by various groups and churches. The Pirates had a 41-60 record at this time, while the Reds were below .500 as well, sitting on a 51-54 record. The Pirates had recently-acquired Mel Queen on the mound to start the game, going up against rookie righty Buddy Lively. His father Jack Lively pitched in the majors 36 years earlier, while Mel Queen’s son debuted as a pitcher for the Reds 19 years after this game.

Queen ran into early trouble, giving up a solo homer with two outs in the first inning. He walked the next two batters before record the final out. The Pirates came right back in the bottom of the inning and took the lead. It started with a walk to Culley Rikard leading off the inning. Ralph Kiner singled him to second base with two outs, then Hank Greenberg scored Rikard with a single. Billy Cox walked to load the bases, then Jimmy Bloodworth singled to score Kiner and Greenberg. Dixie Howell ended the inning with a ground out. It was 3-1 Pirates through one inning.

Queen gave up a two-out double to his mound opponent in the second inning, but that was it. The Pirates struck again in the second inning. The first five batters of the inning either struck out or walked, leaving the bases loaded with two outs. That brought up Greenberg again and he hit a two-run single to make it 5-1.

A third-inning error by shortstop Billy Cox led to the second run for the Reds. Bobby Adams reached first on the error, then moved to third base on a Grady Hatton single. A fly ball wasn’t deep enough to score Adams, but a second one did the trick to make it 5-2. The Pirates got a single by Dixie Howell, but that was it in their half of the third inning.

The Reds tacked on another run in the fourth. Eddie Miller, who you should have read about earlier this week, hit a one-out double. He scored on a single by Eddie Erautt, who was the new pitcher in the game for the Reds. The Pirates were retired in order in the fourth on three straight grounders, getting all four infielders involved in the plays.

This was a 5-3 game going into the fifth, but it wasn’t a close contest by the time the inning was over. The Reds had two walks in the top of the inning, but couldn’t push a run across. In the bottom of the frame, Greenberg got things started with a walk. A single by Jimmy Bloodworth put runners on the corners with one out. Dixie Howell and Mel Queen hit back-to-back RBI singles to make it 7-3.

The Reds brought reliever Elmer Riddle, who would end up on the Pirates before 1947 was over. He was teammates with his brother Johnny  that same year for the Pirates. Riddle immediately allowed a sacrifice fly to Culley Rikard to make it 8-3. The next play was a bit crazy. With two outs and Queen on first, Jim Russell singled to right field. Queen decided to stop at second base, but Russell was in a full out sprint to beat out a double, so Queen decided to run to third base way too late. The cut-off throw from the second baseman in short right field hit Queen and got away, allowing him to run home with the ninth run. Russell, who already made one bad decision on the bases, got hung up between second and third, where he was tagged out to end the inning. 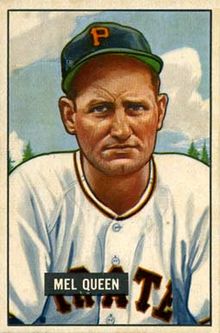 Queen was hurt by another error in the sixth and this one ended his night early. He retired the first two batters, then got a grounder to second baseman Jimmy Bloodworth, who booted it. A double and a walk followed, making it 9-4, which led to Billy Herman bringing in Kirby Higbe to finish out the inning.

The Pirates went down 1-2-3 in the sixth, with Kiner and Greenberg both testing the third baseman for the final two outs. The Reds couldn’t get any closer in the seventh. In the bottom of the inning, the Pirates added to their lead with six straight batters reaching base after the first two hitters made outs. Howell singled and Higbe walked. Rickard scored Howell with a double. The was followed by walks to Russell, Frankie Gustine and Kiner, with the last two free passes pushing runs across the plate. The Pirates were up 12-4. With the bases loaded, Johnny Hetki came in and struck out Greenberg. Hetki would join the Pirates a few years later.

Higbe allowed a single to Hetki in the eighth, but that was it. The Pirates went down in order in the bottom of the inning, then Higbe got a fly ball, a walk and a double play, which ended the game.

The Pirates scored 12 runs and they had just one extra-base hit. Ten singles, one double and ten walks led to the 12-4 rout. Five of the six pitchers used in the game reached base safely, going a combined 4-for-7 with a walk. The Pirates had five players reach base three times each. Greenberg had two hits, a walk, three RBIs and two runs scored. Kiner had a relatively quiet night for the score, going 1-for-3 with two walks, a run and an RBI. Culley Rikard scored three times and drove in two runs. 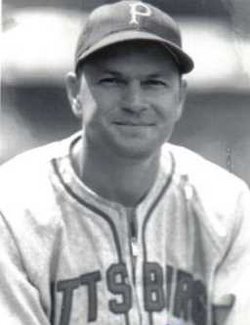