This is a special Card of the Day article because it’s a combo of three different parts of Pittsburgh Baseball Network. Most of our Card of the Day items have been older cards, though we have featured a handful of newer cards, including a 2020 Roberto Clemente card that I had to post as soon as I saw it. What we haven’t featured here yet is an actual prospect, so I’m taking care of that oversight too. Prospects are our biggest reason for this site, so I probably should have thought about it much sooner. I’m not sure why I haven’t done it before today, but that brings us to the third part here. One of the new features that came along with the launch of PBN is an online baseball card store that features cards of numerous Pittsburgh Pirates players/prospects, with more on the way. So in this one article, we are going to continue our Card of the Day feature, add in a prospect twist, and introduce you to one of the added pieces that came along with the new site.

Today’s Card of the Day is the 2015 Bowman Draft Ke’Bryan Hayes rookie card. Here’s the front of the card. 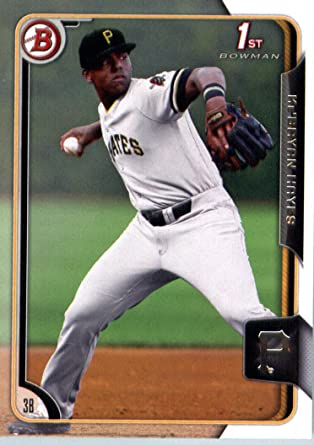 You can see the young Hayes, still just 18 years old in this photo, about to make a throw towards first base. I’ll note that Bowman Draft cards are famous for great airbrushing, so this photo could be from high school and the Pirates gear was added on later. Sometimes they’re unable to get a photo of the player before releasing their card. Hayes played 44 games for the Gulf Coast League Pirates after he was drafted with the 32nd overall pick in the 2015 draft. He batted .333/.434/.375 for the GCL Pirates, stealing seven bases in eight tries. He was moved up to the New York-Penn League to finish the season. Hayes played 12 regular season and five postseason games for Morgantown, helping them to a league title. 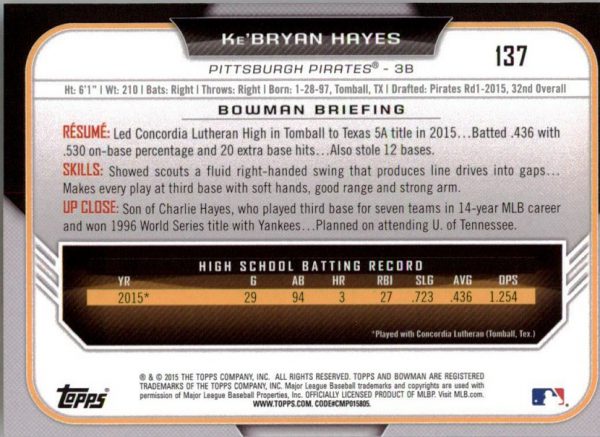 As you can see from the back, the stats are from his high school team and there’s no mention of pro ball accomplishments. That’s because these cards are released prior to the end of the season, which doesn’t allow time to add in anything from pro ball. Hayes put up some big numbers playing in a great area for baseball in Texas. The card has a scouting report for his bat and defense, though we now know that the defensive report was a little conservative for a Gold Glove caliber third baseman. The back also notes his father’s career, though it leaves out the obvious connection to the Pirates for some reason.

As his first card after signing in pro ball, this would be considered his rookie card by most collectors. I will note that a small section of collectors don’t consider minor league cards to be rookie cards, so they would wait until his first card comes out after his debut. Bowman notes “RC” on cards after player’s debut, which stands for rookie card. You can actually find two examples of those in our store. As I said though, many collectors want the first cards of players as pros, so the 2015 Bowman Draft would be their choice for Hayes.

This Hayes card is his base card and is not only the least expensive of his rookie cards, it’s the easiest to acquire. Bowman Draft has special insert cards that are numbered and tough to acquire. Some versions are extremely rare and go for big money. We offered the base card in our store for $2 each, making it affordable for any collector and an inexpensive way to add a nice Ke’Bryan Hayes item before he makes his big league debut. You can find that specific card here. We also have more recent cards of Hayes (2018/19), as well as cards of seven other players in our store cleverly named Cardboard Bucs. No cards are listed for more than $2 each and more prospect options are on the way. We have five different cards in our store of Mitch Keller, who was the team’s #1 prospect until he surpassed the 50 big league innings mark in his first start this year. When he graduated from the prospect list, Ke’Bryan Hayes became the new top prospect in the system.