This article is going to be a bit different than the previous The One Who Got Away articles. They all covered players who went on to have long careers and put up big numbers after they left the Pittsburgh Pirates. Ed Karger was a 23-year-old rookie in 1906, who the Pirates traded away after six games. The bigger story here is why they traded him and what they got back. It was an instant backfire and Karger made the team look bad immediately. He didn’t have the long career of the other players previously covered here, but his trade got a lot of bad press in the years after it happened.

Ed Karger had a very brief minor league career. He was discovered pitching amateur ball at 21 years old and signed with the Houston Buffaloes of the South Texas League in 1905. He pitched great that season, posting a 24-8 record. The Pittsburgh Pirates immediately took notice and he was with the team during the following Spring Training.

Karger’s start with the Pirates was quite an odd one by today’s standards. He delayed his arrival to his first big league Spring Training so he could pitch another game for Houston, as they faced off against the St Louis Cardinals in an exhibition game. The main reason he wanted to stay is because he was getting paid $25 to pitch that game. That St Louis game would be an important game for his future, as we would see twice later on.

Karger debuted for the Pirates on March 31st in a game against Little Rock. He pitched the first five innings and allowed just one hit and no runs. The problem was that he walked seven batters (with three strikeouts) so it wasn’t a dominating performance.

Karger was the umpire during an April 4th game, then was supposed to start the next day against Memphis, but it was rained out. He faced Nashville on the 6th and once again tossed five shutout innings. This time it was on three hits and just one walk. Karger had another appearance three days later rained out just as he was starting to warm up for the game.

On April 9th, Karger made his best impression on the team and got plenty of praise afterwards. He threw six shutout innings against Terre Haute and the only hit he allowed was wind-aided according to the reports. When a runner got on against him with no outs, he proceeded to strike out the next three batters. He was up to 16 shutout innings to start his time with the Pirates. That was his last Spring Training start, with the regular season beginning three days later.

Despite some veteran pitchers being ahead of Karger on the depth chart, the Pirates used him to start the second game of the season in St Louis on April 15th. He had already pitched well against the Cardinals recently while still with Houston, so manager Fred Clarke decided to give him the ball. Karger did not disappoint. He went eight innings in the 5-3 victory, giving up one run on six hits and a walk.

Three days after his debut, Karger pitched five innings in relief. He allowed three runs in the seventh, but they came without the aid of a single hit in the inning. The Pirates made four errors that day in a 7-4 loss. Karger gave up two hits and two walks.

On April 27th, Karger was given his second start and it was because St Louis was in town. He pitched well, but was removed after five innings, which did not sit well with the home fans, who gave quite a “hissing” to manager Fred Clarke. Karger allowed three runs on three hits and three walks in his five frames, but one of those runs was unearned and it was on a misplay by Clarke. The score was 3-2 at the time and the Pirates ended up losing 8-2. That would be the last start for Karger with the Pirates.

On May 4th, Karger allowed two runs in five innings of relief work against the Chicago Cubs. The game-by-game log for Karger with the Pirates shows a long break between appearances, going from the 4th until May 24th without a game. However, he pitched and won an exhibition game on May 9th during an off-day on the schedule. On the 24th, Karger picked up a win by allowing one run over four innings of relief work. Five days later was his last appearance with the Pirates and he took the loss by allowing one run over one inning in relief.

With St Louis in town on June 1st, manager Fred Clarke engineered a trade of the 23-year-old Karger for 31-year-old veteran pitcher Chappie McFarland. The paper announced the transaction and quoted Clarke as saying that he made the deal because he already had two good lefties, Lefty Leifield and Homer Hillebrand. Clarke wanted to send Karger to the minors for more experience, but St Louis manager John McCloskey, who saw enough of Karger against his team to know he was good, put a claim in on the young pitcher. Instead of keeping Karger, Clarke acquired McFarland. St Louis was initially only offering cash, so at least the Pirates got a warm body who was a semi-decent veteran.

It was known that Clarke preferred to use veteran players and he usually kept rookies on a short leash. In later years, the local papers constantly brought up this fact whenever a rookie pitcher was doing well during Spring Training. In fact, it was mentioned quite often with Hall of Fame pitchers Dazzy Vance and Red Faber (see articles below). If it was true that he was traded just because he’s a lefty, that makes it a bad deal, but the fact that he was a rookie with one year of minor league ball, was likely the bigger reason.

There are many things wrong with that deal, but one of the biggest was Hillebrand being kept over Karger. The Pirates used Hillebrand just four more times all season and he then eventually hurt his arm and was effectively done as a player. They couldn’t have known the injury part, but they weren’t keeping a star player over Karger. The second problem is that they acquired a mediocre veteran, who the Pirates gave up on before July ended. The most obvious problem was the player they gave up and how it immediately came back to bite them.

Karger started for St Louis the rest of the way and posted a 2.72 ERA and a 1.23 WHIP in 191.2 innings. Combined with his time in Pittsburgh, he finished his rookie season with a 2.62 ERA and a 1.21 WHIP in 219.2 innings. It was right in the middle of the deadball era, but he managed to go the entire season without allowing a home run, while also hitting one homer, to go along with his .214 batting average.

The real hatred for the trade from the press came during the following season. The Pirates had nothing to show for the trade, while Karger was a dominant pitcher on an awful St Louis team. The club went 16-16 in his starts and 36-85 when he wasn’t starting. The Pirates seemed to have his number, winning all five games he pitched against them in 1907. So if you think about it, he went 16-11 in starts against the rest of the league and never faced the worst team in the league (because he was playing for them). Karger finished the year with a 2.04 ERA in 314 innings.

On August 11, 1907, Karger threw a seven-inning perfect game. It’s not recognized as a perfect game now because it didn’t go the full nine innings, but the game was decided ahead of time to be limited to seven innings during the second game of a doubleheader. The Pirates actually had two shortened no-hitters around this same time during doubleheaders due to time constraints (one for darkness, one due to travel schedule). Regardless of the current definition of a perfect game, it was still a complete game, played to the scheduled seven innings, in which he retired all 21 batters. That performance led to this headline from the Pittsburgh Press: 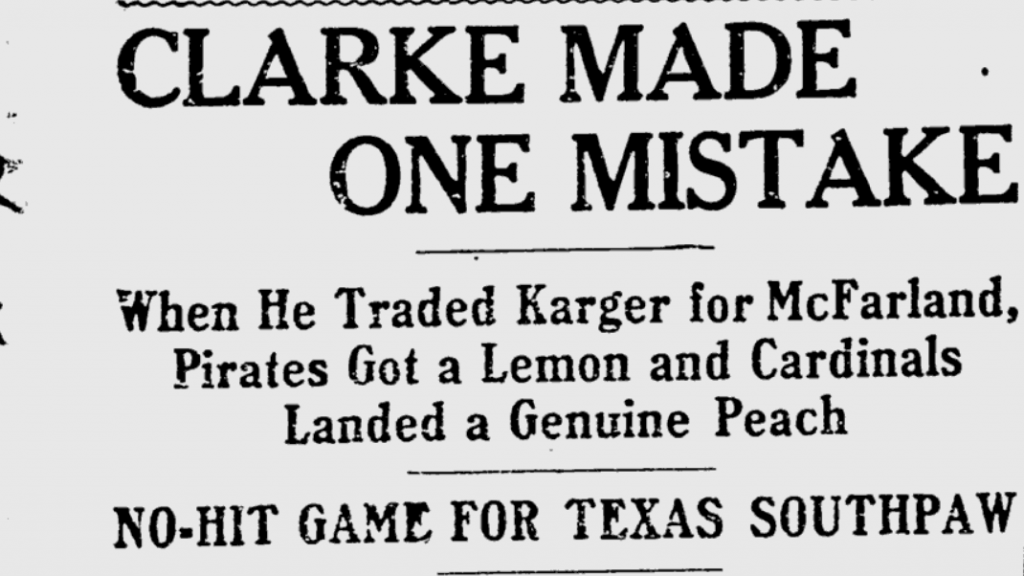 The rest of Karger’s career saw him have average success. There was talk in the middle of 1908 that he planned on retiring from baseball and he didn’t pitch after September 2nd that year. He was traded to the Cincinnati Reds in the off-season and dealt to the Boston Red Sox during the 1909 season. He pitched three season there and had a 21-17, 3.25 record in 382.1 innings. He went to the minor leagues in 1912 and played off and on through 1921 before he retired for good from baseball.

The Pirates gave Karger a real chance to pitch by sending him to St Louis, where his career gets somewhat lost because the team was awful. He has a career 48-67 big league record, but that came with a 2.79 ERA in 1,091.1 innings. The real reason he gets a One Who Got Away article is the way he was let go.

Karger earned a spot on the 1906 roster with just one year of minor league ball to his credit, then posted a 1.93 ERA in 28 innings before he was let go due to some combo of being a lefty and being a rookie. The return was a veteran who was out of the majors just two months later, while Karger was out-pitching their trade return and one of the lefties the Pirates decided to keep. He then went on to post a 2.04 ERA in 314 innings the next year, while pitching a perfect game. There was word that the losing in St Louis was getting to him in 1908, which brought on the retirement talk, which if true, wouldn’t have been an issue on a Pirates team that finished one game back in the 1908 NL standings.