The best season according to WAR for any player in Pittsburgh Pirates franchise history happened in 1885. That year, lefty pitcher Ed “Cannonball” Morris posted a 12.7 WAR. That’s the 25th best season in baseball history going by WAR. Morris set three franchise records that season that will never be topped, while also posting two pitching marks that have only been topped by his own 1886 season.

Morris was a 21-year-old rookie for the Columbus Buckeyes of the American Association in 1884. He was an instant star, going 34-13, 2.18 in 52 starts, with 429.2 innings pitched. Columbus was a strong team, but they were folding after the season and the Pittsburgh Alleghenys purchased ten of their players, including Morris.

The 1884 Alleghenys were one of the worst teams in franchise history. They went 30-78, finishing in 11th place in the 12-team league. The new blood turned the team around instantly, led by Morris, who would put together a special season for the Pittsburgh fans.

The Alleghenys had a two-man pitching rotation to begin the 1885 season and their second starter is more famous than Morris, though not for his pitching ability. Hank O’Day, the Hall of Fame umpire, was the alternating starter with Morris at the beginning of the season. By the end of the season, the second starter was someone who is still more famous than Morris, Hall of Fame pitcher James “Pud” Galvin. Neither pitched half as well as Morris that season.

The 1885 season opened on April 18th with a preview of things to come. Morris threw a shutout over St Louis, winning 7-0. Three days later, he threw 13 innings in a 4-3 win over Louisville and their star pitcher, Guy Hecker. Another three days later, Morris went 16 innings in a 7-6 win over Cincinnati. In the first week of the season, he threw 38 innings.

Morris still had two more April starts. He had a tough 2-0 loss to star pitcher Bob Caruthers, then threw his second shutout two days later over Louisville. He went 4-1 in April, while O’Day lost all four of his April starts.

May started off win a 3-2 over St Louis. After O’Day lost his fifth straight, Morris got the next three starts, including back-to-back days on the 4th and 5th. He lost two of those starts, but didn’t pitch bad in either contest. Morris then ran off four straight victories, including three in a series against Brooklyn. However, when they tried him three times in a row again, he had a rough outing in a 7-0 loss to Philadelphia, going up against 297-game winner Bobby Mathews.

Morris tossed his third shutout of the season on May 23rd against Baltimore, then beat the Orioles three days later by a 2-1 score. He would win two out of his next three starts to finish May with a 13-5 record.

June started off with a four-game series in Brooklyn and Morris matched up three times with Henry Porter in the series. Morris won two of the three contests, including a 2-0 victory in the finale. Morris then split two games against Baltimore’s Hardie Henderson, who would later become his teammate in Pittsburgh.

On June 16th, Morris had his worst outing and once again it was a one-sided loss to Bobby Mathews and Philadelphia. Cannonball (a 19th century term for a strikeout pitcher) gave up 14 runs in the loss. He gave up 20 hits, including six to Henry Larkin, who hit for the cycle. Morris would end up losing two more times in the series to Mathews.

After that 13-5 start, Morris was 16-11 going into play on June 25th. He won his 17th game over St Louis that day, then picked up win #18 two days later against Guy Hecker. That was a significant win, though not at the time. The rest of the Alleghenys staff won a total of 17 games in 1885, so he surpassed their combined total with more than half of the season still remaining.

Morris closed out June with another win, then picked up victory #20 on July 2nd. Bobby Mathews continued his dominance over Pittsburgh on July 4th, beating Morris 8-4. It was the fifth loss for Morris to Mathews in five starts. As a side note, Hank O’Day’s last start for the Alleghenys was in place of Morris against Mathews on July 6th and O’Day lost 8-0. That game opened the door for Pud Galvin to join the team.

Morris beat Philadelphia on July 7th, then two days later he was part of the best game of the season. The Alleghenys defeated New York by a 17-0 score. Cannonball allowed five hits (all singles) and struck out nine batters. He wasn’t done with New York though, because on the 11th, he tossed another shutout. He allowed four hits in the second game, all singles.

At home against Baltimore, Morris took two of three against Hardie Henderson. He then pitched back-to-back days against Brooklyn and won both contests. That was followed immediately by Galvin making his Pittsburgh debut and winning on consecutive days. Morris took the series opener versus St Louis, giving Pittsburgh a 42-28 record at the time. They were in second place, trailing only St Louis, but that would be the high mark of the season. The Alleghenys did not finish strong, going 14-27 the rest of the way.

Morris had a 29-14 record at the end of July, finishing the month with a win over Guy Hecker. August started off rough, with three losses in his first four games, including two 14-inning games in which he allowed a total of six runs. Morris picked up win #30 on August 9th over St Louis.

The contest on August 20th was a crazy one, as Morris and Bob Caruthers was matchup of star pitchers on paper, but Pittsburgh pulled out an 11-10 victory in a slugfest. Both sides had 13 hits and the teams combined for five triples. Pittsburgh led 9-3 at one point, but needed two runs in the ninth for the win.

On August 30th, Morris was forced into full-time duty and made seven straight starts for Pittsburgh. It did not go well, with a 2-5 record, though he pitched well in two of those losses and got no support.

Morris threw his last shutout on September 15th and he won his final start on the 23rd against Baltimore. He didn’t start any of the final seven games, and Pittsburgh lost six of them to finish 56-55 on the season.

Morris finished with a 39-24 record and a 2.35 ERA. He made 63 starts and completed all of those contests, throwing a total of 581 innings. He picked up 298 strikeouts. Morris led the American Association in games started, complete games, shutouts (7), innings pitched and strikeouts. His 63 starts and 63 complete games are both Pirates franchise records, with the asterisk that he did the exact same thing in 1886, so he shares the record with himself. His innings total is a team record that will never be approached, just like the games started/complete games records. His 39 wins and 298 strikeouts both rank second behind his 1886 season. 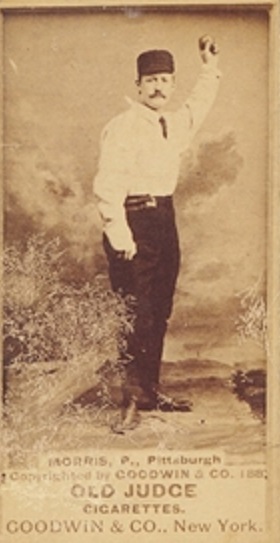