When I wrote up the recent Game Rewind featuring Honus Wagner playing against the Pittsburgh Pirates in 1933, I mentioned that I found the game while doing some other research. I was looking up information on a first baseman from a different exhibition game, with a name that I didn’t recognize. That player turned out to be Grover Hartley. After some research, I decided to throw together an extra Obscure Pittsburgh Pirates article to highlight his time with the team.

Hartley began his pro career in 1909. Two years later he was in the majors, catching for the New York Giants. He spent seven straight seasons in the majors (1911-17), seeing time with three different clubs. His best year was in the Federal League, a recognized Major League for the 1914-15 seasons. He played a career high 120 games in 1915 and hit .274 with 50 RBIs. 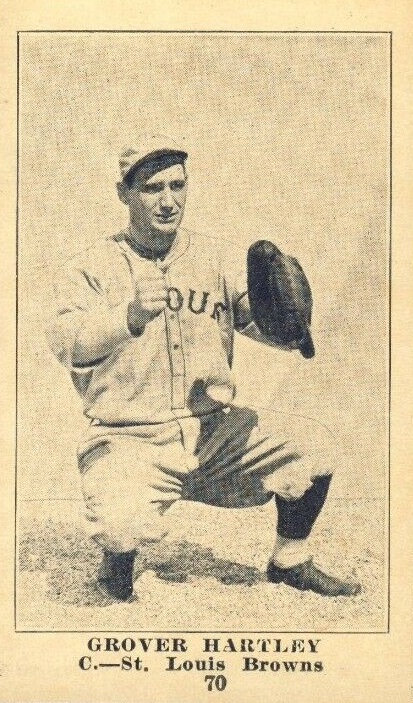 Hartley found himself in the minors by 1918. He spent seven straight seasons with Columbus of the American Association, before returning to the New York Giants in September of 1924. Hartley remained with the Giants until 1927, when he played one season for the Boston Red Sox. He was let go by the Red Sox and became a coach for the Cleveland Indians. While there, he managed to get into 25 games in his three seasons with the Indians. In 1931, Hartley was hired to became a coach with the Pirates.

That’s a brief rundown of his long career in baseball up until his time with the Pirates. He didn’t add any big league time during his three seasons in Pittsburgh, but he obviously got his own article for a reason. I wouldn’t just feature a random coach from the 1930s without a good story behind his time in Pittsburgh.

Hartley was one of three coaches for the Pirates during his time with the team. He was joined by the great Honus Wagner, as well as Otis “Doc” Crandall, who was a pitcher for the Giants when Hartley was there catching.

I mentioned at the top of this article that I saw Hartley’s name in a 1933 boxscore at first base. As research turned out, he played a total of six in-season exhibition games during the 1932-33 seasons with the Pirates. The team played some exhibition games while he was there in 1931, but he didn’t participate in any of those contests. In-season exhibition games were quite common during the early days of baseball and they sometimes gave teams a chance to tryout new players. In this instance, it was a chance for a former player to relive some past glory. I thought I’d give a brief rundown of Hartley’s game appearances in a Pittsburgh Pirates uniform.

On June 28, 1932, the Pirates were playing a local team from Marion, Ohio and they crushed them, winning 24-2. Hartley took over mid-game for first baseman Gus Suhr and went 1-for-2 with a double. He handled four plays in the field without an error.

On August 8, 1932, the Pirates took on a team of All-Star players from the Pine Tree League, while playing in Portland, Maine. Pittsburgh ran away with a 10-0 victory and the 44-year-old Hartley once again replaced Suhr mid-game. Hartley went 2-for-2 with two runs scored and he handled first base cleanly.

On June 12, 1933, the Pirates played Springfield, from the Mississippi Valley League. Hartley finished the game behind the plate, replacing Hal Finney. It appears that he didn’t play long and may have only caught the ninth inning. The game report notes that Honus Wagner played first base in the ninth, so maybe they came in at the same time. Hartley didn’t have any at-bats or fielding stats. The Pirates won 6-3 after a late comeback.

On August 8, 1933, Hartley replaced Paul Waner mid-game in right field against a minor league team from Wheeling. Remember that Hartley was a 45-year-old former catcher at the time, so he probably couldn’t cover much ground. He went 0-for-2 with a putout and the Pirates lost 5-4 in ten innings. It should be noted that the losing pitcher was coach Doc Crandall, who last pitched four years earlier in the minors at age 41.

On August 9, 1933, the Pirates lost to a 17-year-old pitcher/farmer for a team from New Haven. Hartley replaced Paul Waner in right field mid-game again, but he finished the game on defense behind the plate. In the ninth inning, Honus Wagner pinch-hit for Hartley, who went 0-for-1 in the game.

On August 27, 1933, the Pirates were playing the Savitt Gems, a strong semi-pro team from Hartford, Connecticut. Hartley went 0-for-1 and finished the game behind the plate. He collected one putout. The Pirates won 9-3, though they were only up by a run going into the ninth.

Hartley was let go by the Pirates after the 1933 season when they decided that they only needed two coaches. He became a coach with the St Louis Browns, but he was forced into action for five games when the team was down to just one healthy catcher available. He would end up managing in the minors for ten seasons and he even saw some playing time during the 1937-39 seasons. He turned 50 years old during the middle of that 1938 season. It gave him a playing career in pro ball that spanned from 1909 until 1939.

Hartley played a total of 569 games in the majors over 14 seasons. He never played an official game for the Pittsburgh Pirates, but you can find his name in six mid-season boxscores, playing three different positions, with no errors and three hits to his credit.