We moved up Ed Fitz Gerald on our Obscure Pittsburgh Pirates feature because we recently found out that he passed away at 96 years old. He definitely qualifies as an obscure player in team history. He was with the club for six seasons, though he only played 295 games for the Pirates. His last game with the team was 67 years ago and there was really nothing during his time that stood out, but his start with the Pirates was far from a quiet one.

Late in the 1947 season, the Pirates acquired Fitz Gerald from Sacramento of the Pacific Coast League. He was 23 years old at the time and in his second season of pro ball. The announcement of his acquisition in the Pittsburgh Press said that “Bucs Buy Coast League’s Star Catcher” and in the first paragraph of the article, they went as far as saying that it was a “major move that will make Forbes Field a better place to live in 1948”.

Fitz Gerald hit .363 in 144 games during the 1947 season, with 36 extra-base hits and 26 stolen bases, which was among the league leaders. The Pirates acquired him on September 7th, though he remained in Sacramento for the rest of the 1947 season.

If the headlines and stats for Fitz Gerald didn’t immediately get Pirates fans excited, maybe the package that they put together to acquire him did, as it showed how much they valued him. He was reportedly pursued by nine of the 16 big league teams, so the Pirates had to outbid everyone else. They paid a reported $40,000 in cash, which was a large sum for a baseball transaction in those days. They would also send three players to be named later to Sacramento, along with two players on option. The last part is similar to what teams do with Triple-A clubs now, except there was no affiliation between the two clubs at the time. The latter two players would still belong to the Pirates, but they would play for Sacramento in 1948. 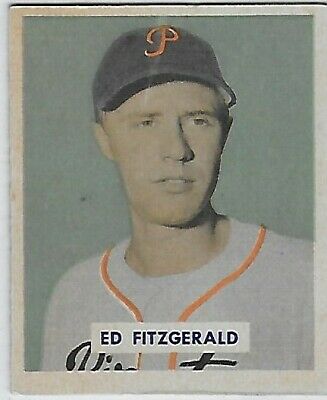 In 1948, Fitz Gerald was a platoon catcher with Clyde Kluttz, a 30-year-old veteran who put up a .790 OPS for the 1947 Pirates. Both catchers received similar playing time and each finished the 1948 season with 297 plate appearances. Fitz Gerald hit .267/.349/.336, with nine doubles, three triples and a home run. He threw out 39% of base runners, but he led the league with 15 passed balls, despite starting just 66 games behind the plate (he also played 30 games at catcher off of the bench). That rookie season would end up being his best in Pittsburgh.

In 1949, Fitz Gerald put up a somewhat similar slash line over 75 games, with almost identical finishes in batting average and slugging, but a much lower OBP due to a major drop in his walk rate. Clyde Kluttz was no longer around, though a different Clyde took his playing time. Veteran Clyde McCullough was the starter, while third-string catcher Phil Masi also saw decent time. In his limited time, Fitz Gerald threw out 59% of runners attempting to steal against him.

In 1950, Fitz Gerald started five of the first nine games behind the plate, but an .067 average (1-for-15) landed him on the bench and soon resulted in a trip to the minors in early May. He batted .440 during Spring Training to win a spot on the Opening Day roster, but he quickly lost that hitting stroke once the season started. He was sent to Indianapolis, where manager Al Lopez, was going to help him become a better catcher. Lopez is in the Hall of Fame as a manager, though he was also one of the great catchers in the first half of the 20th century. Fitz Gerald spent the rest of the 1950 season in the minors and hit .313/.383/.397 in 104 games.

Fitz Gerald was a backup catcher for the 1951-52 Pirates, seeing very little time behind the plate and more pinch-hit at-bats than anything else. He started just 22 games at catcher during those two seasons combined, while coming off the bench on defense in another 34 contests. In 1952, he made two starts at third base, the only two games played at the hot corner in his career. The defense was still below average at this time, while he wasn’t doing much with the bat either, putting up a .574 OPS in 1951 and .588 the next year.

In 1953, Fitz Gerald was with the Pirates until May 13th, when he was sold to the Washington Senators. He went 2-for-17 in six games for the Pirates that season. He became a steady presence behind the plate for the Senators over seven seasons, putting up a total of 2.2 WAR over the 1954-56 seasons. By the end of his career in 1959 he was considered a better than average defender behind the plate.

Fitz Gerald hit .260/.323/.336 in 806 games over a 12-year career in the majors. With the Pirates, he had a .247/.310/.316 slash line. While he didn’t live up to the hype surrounding his acquisition by the Pirates, he had a long big league career with a solid rookie season and a nice little run over three seasons in Washington. One of the oddities of his career was the 26 stolen bases in the PCL before his rookie season. In the rest of his pro career, he had a total of 12 stolen bases. 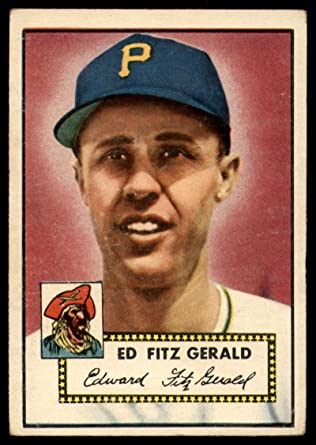