Rip Sewell pitched 12 seasons for the Pittsburgh Pirates from 1938 until 1949. Nearly his entire career was spent with the team, except for five games with the 1932 Detroit Tigers. He was a three-time All-Star, who won 143 games in Pittsburgh, ranking him tied for seventh in team history for victories. He did that all despite the fact that he was 31 years old by the time he joined the Pirates and he was badly injured in a hunting accident in 1941. I’m sure he will be featured in Pittsburgh Pirates Seasons multiple times, but we start off with his 1943 season.

Sewell posted his best single season ERA in 1943 when he was 36 years old. It helped that the competition level was watered down due to players leaving for the war, but we are still talking about someone who was shot 16 months before the 1943 season started and had to make changes to his delivery in order to compensate for his injury. He was known for his famous eephus pitch, which was often referred to back then as either a blooper or a rainbow pitch. He didn’t use it as often as some stories say. A late 1944 game recap said that his rainbow pitch was hit hard when he used it, “which wasn’t often these days”.

The 1943 seasons began with Sewell’s best game of the season. On Opening Day at Wrigley Field on April 21st, he shut out the Chicago Cubs on three hits and three walks, with four strikeouts. Four days later he faced the Cubs again and gave up ten hits, but still got the complete game victory in the 6-2 win.

Sewell won three straight games to open up the season and all three were against the Cubs. This time at Forbes Field, he went all the way in a 6-3 victory, despite issuing five walks.

The streak was snapped 12 days later in a no decision in Brooklyn. Sewell allowed four runs over 7.2 innings. He took his first loss five days later in Boston with a similar line, giving up four runs (three earned) in seven innings. He had five strikeouts in this game.

Sewell was quickly back on track with a 4-1 complete game victory. This victory started an odd streak of pitching to contact. He was a ground ball pitcher who didn’t miss many bats. In fact, he went six straight starts from May 23 to June 15 without picking up more than one strikeout in a game. I mentioned his five strikeouts in the May 18th loss above just to note that it was his season high and he then managed to follow it up with five strikeouts total over the next 46.1 innings.

It didn’t matter that he wasn’t striking anyone out, but Sewell was winning. He went 4-1 during that six-game streak, pushing him to a 7-2, 2.73 record at the time. He was able to win on June 3rd over the New York Giants, despite 11 hits, eight walks and zero strikeouts.

The streak was broken by a game with two strikeouts on June 20th, so he didn’t just start missing a lot of bats at that point. In fact, it was a fairly rough start, with ten hits, two walks and two errors behind him.

Sewell went to the mound four days later and beat the Cubs again with one run on 11 hits in a complete game. He followed that with another one-run complete game, though this time the run was unearned. By the end of June, he was 10-2 with a 2.41 ERA.

Sewell won his next two starts, gaining some revenge against Brooklyn in the second game. They served him up one of his two losses, and knocked him out in the third inning of a different game. On July 2nd, he tossed a complete game win, giving up one run on five hits and a walk against the Phillies. Six days later against the Dodgers, he tossed another complete game, giving up two runs (one earned) on seven hits. Sewell didn’t strike out a single batter in these two starts.

Sewell’s 12-2 record helped him get elected to his first All-Star game in 1943. It took place July 13th at Shibe Park in front of 31,938 fans. He pitched the bottom of the sixth inning with his team down 5-1. The first batter reached on an error. That was followed by a sacrifice bunt, then a ground out and a fly ball to center field for a scoreless inning of work. The ground out was from Hall of Famer Bobby Doerr.

Coming back from the break, Sewell extended his win streak to seven games with an unbelievable stat line, at least by today’s standards. He threw a complete game in the 9-5 win over the St Louis Cardinals, while allowing 15 hits.

This is where things get a bit odd. Sewell’s streak technically ended at seven games, but it wasn’t known at the time. He lost as a reliever on July 18th, giving up one run over the final three innings. The problem is that the game was halted in the eighth inning, then completed on September 1st, so he didn’t get credited with the loss until 45 days later. In the meantime, he threw his second shutout on July 20th, then beat Brooklyn, New York and Boston all at Forbes Field, throwing three complete games with five runs allowed total.

On August 1st, his record was 17-2 without the loss that would eventually be credited to his July 18th outing. His 11-game win streak eventually got knocked down to the seven games, where it stands today. 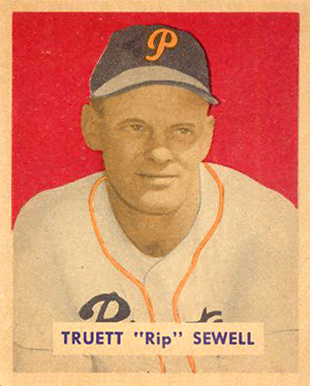 Sewell was on track for a big win total, but he hit some rough patches over the final two months, not all being his fault. Two of his losses were games in which he allowed one earned run over eight innings. Another was two earned in eight innings. Things worked out for him too at times, including a second win in which he allowed 15 hits, though this time he was knocked out of the game in the sixth inning. Sewell picked up three saves between August 17th and September 5th, though the save wasn’t an official stat at that time.

On September 3rd against his favorite team to face in 1943, Sewell won his 20th game, throwing a complete game in the 5-1 victory over Chicago. On September 19th, he won his final start of the year, giving him a 21-9 record on the season. He finished with 265.1 innings and a 2.54 ERA, which ranked fourth best in the NL. He led the league in wins and complete games (25). Those stats garnered him heavy MVP attention. He finished sixth in the voting.