Today’s Card of the Day is card #143 of the 1965 Topps set, featuring Pittsburgh Pirates Rookie Stars John Gelnar and Jerry May. Gelnar was a right-handed pitcher, while May was a catcher. Both debuted in the majors during the end of the 1964 season.

Topps didn’t have a standard two-player card for each team. Some teams had three or four players on their Rookie Stars card. There were also separate three-player cards for the National League and American League. Some teams even had more than one card, which was a bit odd to see four players on one card for one team, then teams like the St Louis Cardinals and Milwaukee Braves had two cards with two players. It actually worked out well for those two teams, as it gave better photos for rookie cards of 300-game winners Phil Niekro and Steve Carlton, though Niekro had a 1964 card already so it wasn’t technically a rookie card. The Rookie Stars subset also featured future Hall of Famers Joe Morgan, Catfish Hunter and Tony Perez. 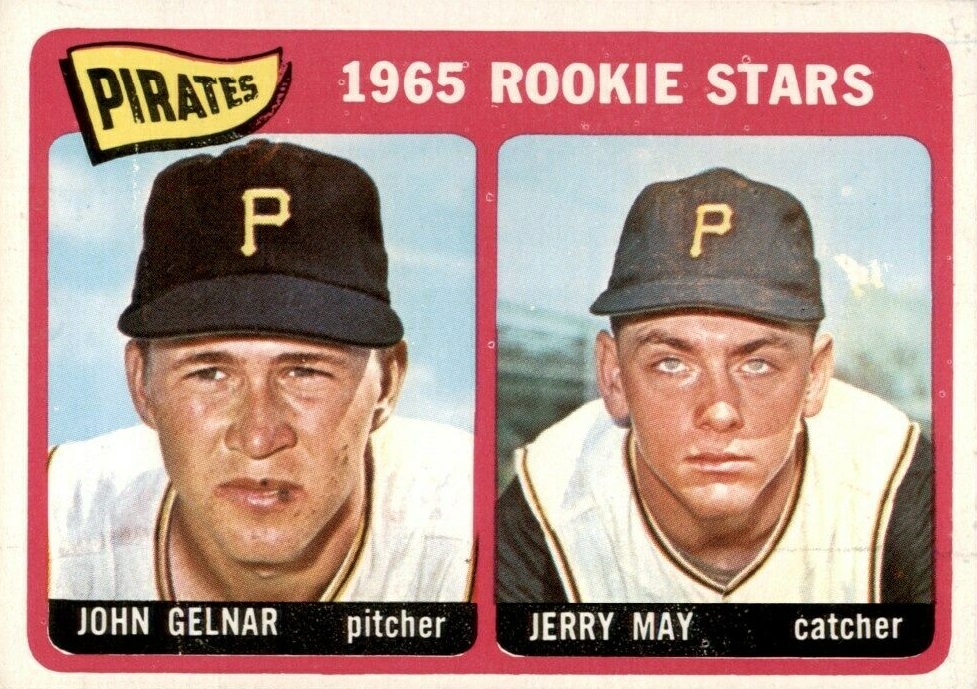 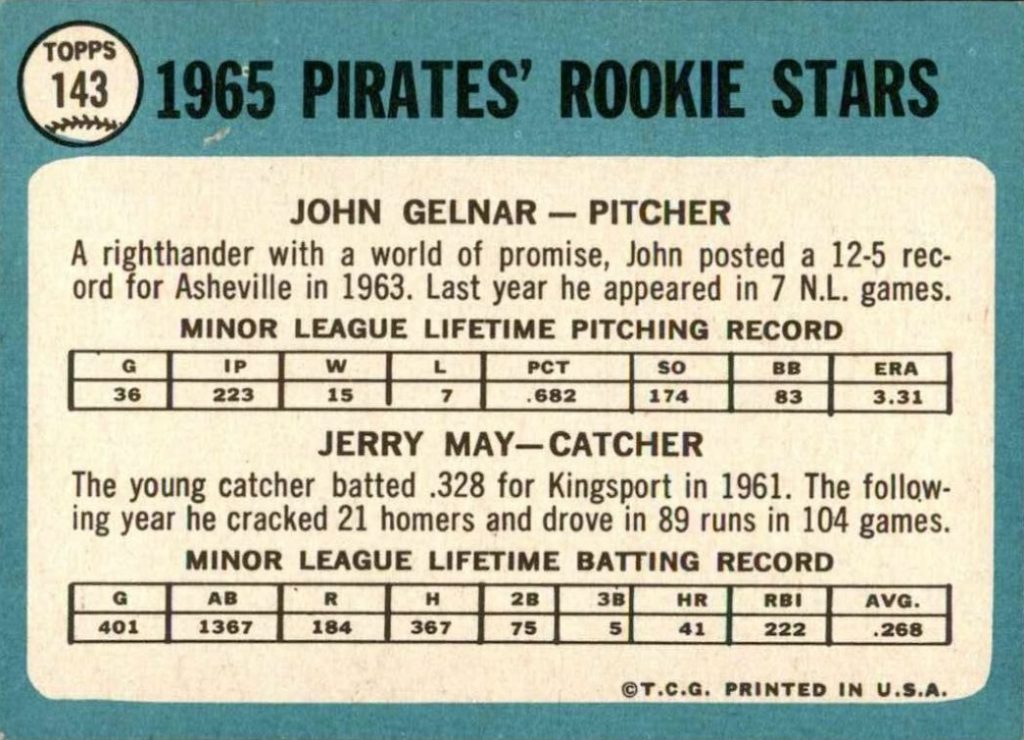 As you can see, Gelnar was considered to have “a world of promise” according to Topps. The 21-year-old made his Major League debut during the 1964 season, pitching seven games and nine innings over the final two months of the season. He actually pitched well in Triple-A in 1965 without getting a big league shot. He wasn’t as good in 1966, but he made one start and nine relief appearances for the Pirates the following year after posting a 2.80 ERA in 148 innings. He caught his break after the Pirates sold him to the Kansas City Royals, who in turn moved him on to the expansion Seattle Pilots. Gelnar made 94 appearances (ten starts) over the next three seasons.

May played seven seasons for the Pirates, though more than half of his games came during the 1967-68 seasons. He was a .237 hitter with 13 homers and 100 RBIs in 417 games. He too moved on to the Royals from the Pirates, but his move didn’t help him like it did for Gelnar. May played just 135 games after the trade. May had just turned 21 years old when this card came out.

Topps really didn’t have a lot of imagination in 1966. They used May once again on a Rookie Stars card and even used the exact same picture. You could say that this was a miss by Topps, but then again every team got a card and not every team has two good prospects near the majors each season. May played ten years in the majors, so that’s not insignificant. Gelnar had two seasons where he was a big league regular and probably would have put in more MLB time with a lesser club in the mid-late 60s. He put up some solid stats in Triple-A during that time as a starter and it led to very little big league time in Pittsburgh.