This is part six of our Prospect Throwback series, where I look at a Pittsburgh Pirates minor league set that I purchased and highlight a group of the players and coaches. The other five articles are all linked at the bottom of this article. Today’s team is the 1986 Macon Pirates. This is the third set I’m covering from the 1986 season and the second Macon team set. I also wrote about the 1987 Macon Pirates (see below).

The 1986 Macon Pirates are one of the least interesting teams here. They had a total of three future MLB players and two of them weren’t with the team during picture day, so they didn’t make it into the set. Rick Reed would have made the set a little more interesting, but he only played one game with the team after signing that year as a 26th round draft pick. He went on to pitch 15 seasons in the majors.

The other future MLB player was Brett Gideon, who pitched 29 games for the 1987 Pirates, before being traded to the Montreal Expos for Neal Heaton. The rest of his big league career consisted of five relief appearances over two seasons north of the border. Gideon lasted just six games with Macon in 1986.

Not only does the team not have star power, they also weren’t that good on the field. They finished with a 54-84 record, and that’s with Gideon going 5-1 in his six games. Despite the lack of names and poor record, there are still some interesting cards from the team set. We start here with the Major Leaguers.

If you’re a Pittsburgh Pirates fan who collects cards, then the selling point with this set is the Orlando Merced card. He’s the only future MLB player in the set. Merced was 19 years old at the time and he hit just .197 in 65 games. So he wasn’t exactly giving off prospect vibes that year, though he was young for the league. Merced was injured for almost all of 1987, the returned with a solid season in 1988, even better in 1989, the made the majors in 1990, just in time to be part of three straight NL East division titles. He spent 13 years in the majors, the first seven with the Pirates.

I mentioned there was only one future MLB player in the set, but I also used the words “Major Leaguers” for that photo. Pitching coach Dwight Bernard had just retired as an active player and he spent four years pitching in the majors with the 1978-79 New York Mets and 1981-82 Milwaukee Brewers. He had a 4.14 Major League ERA in 115 appearances and 176 innings pitched.

Mike Quade played minor league ball for the Pirates from 1979 until 1983. He was a 22nd round pick in 1979. Two years later, he was the manager for Macon and had similar records each year with the club, going 56-82 in 1985 and 54-84 in 1986. He eventually worked his way up to a big league job managing the 2010-11 Chicago Cubs. Combining his minor league and big league time, he has managed over 2,800 games. He has also served as a first base and third base coach in the majors. 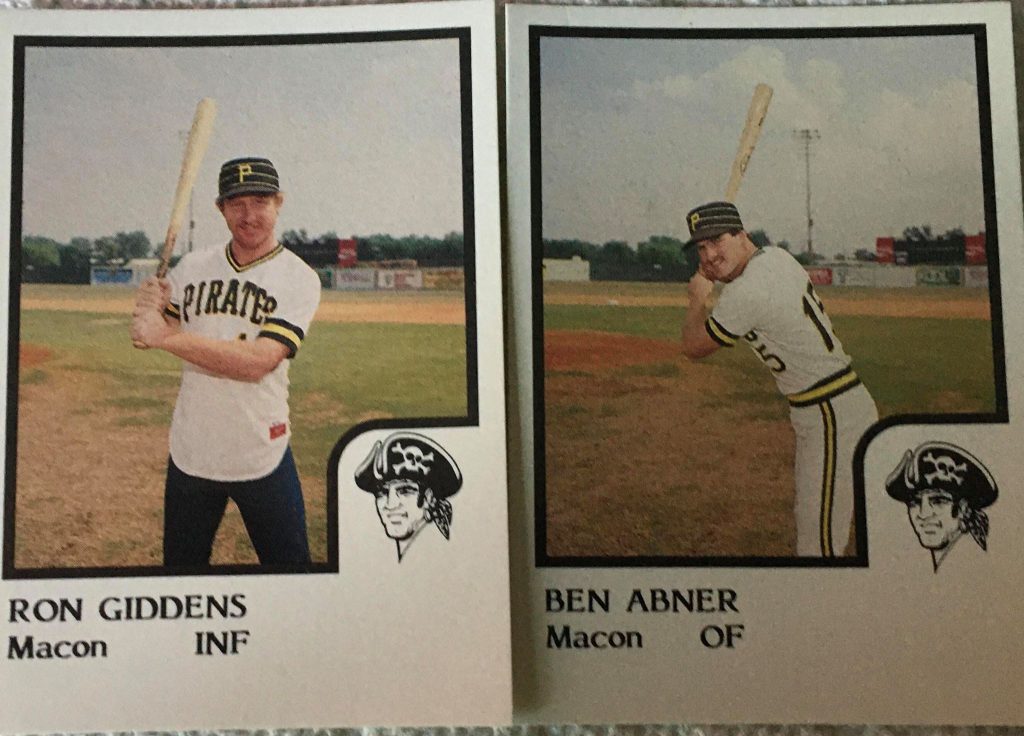 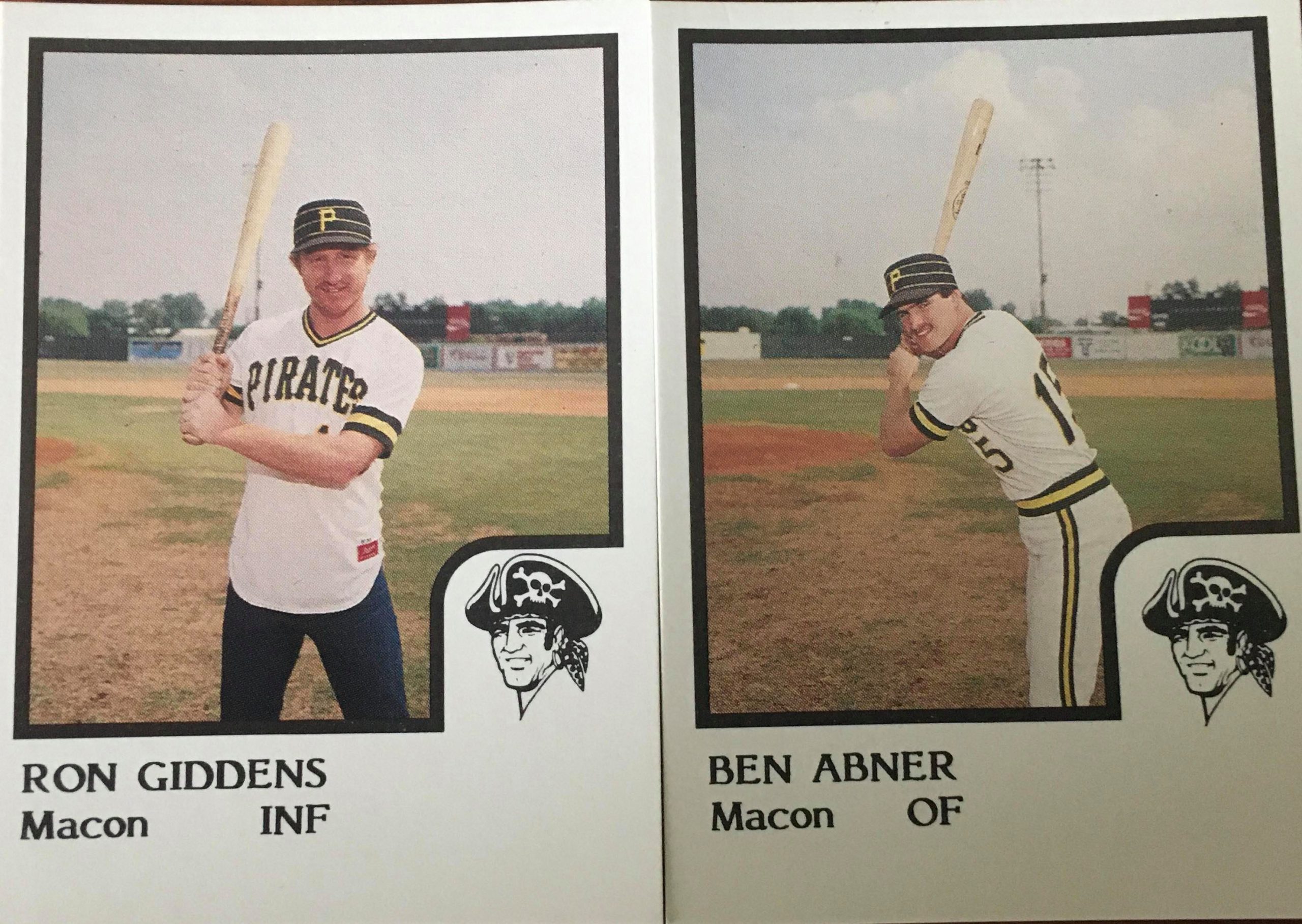 The second photo here shows infielder Ron Giddens and outfielder Ben Abner. I put them together because they were the two players the Pirates received from the Montreal Expos in exchange for first baseman Jason Thompson. Abner is the brother of Shawn Abner, who was the #1 overall pick in the 1984 draft. Shawn played six years in the majors, while Ben topped out at Double-A during his four years in pro ball.

Giddens topped out at High-A during his four years in pro ball. He apparently didn’t get the memo to wear his full baseball uniform during photo day. 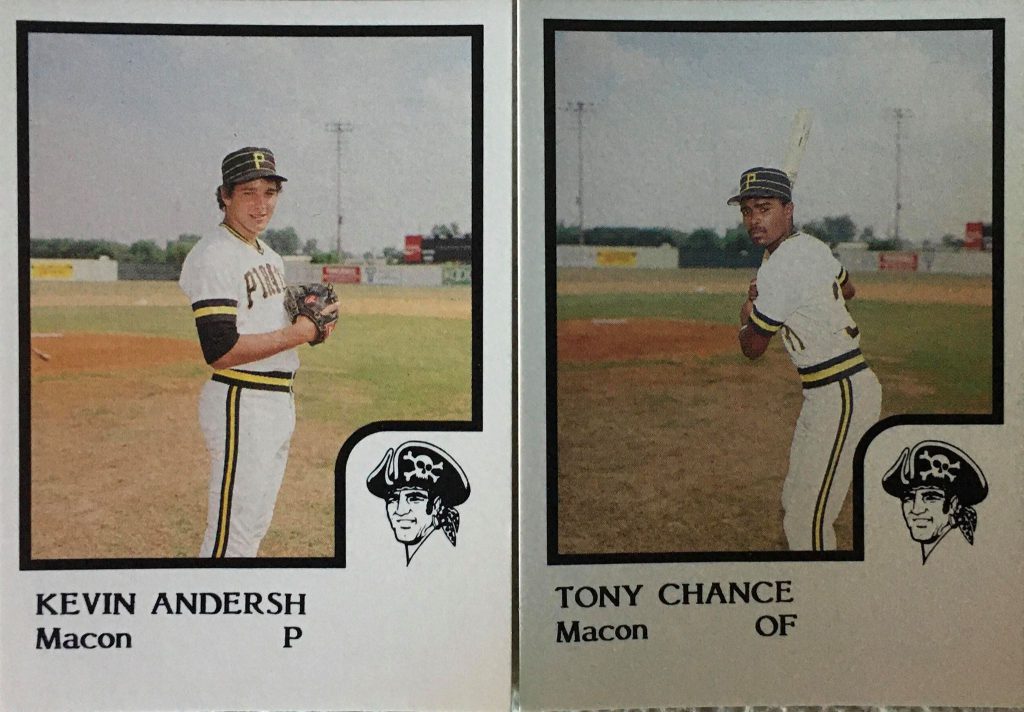 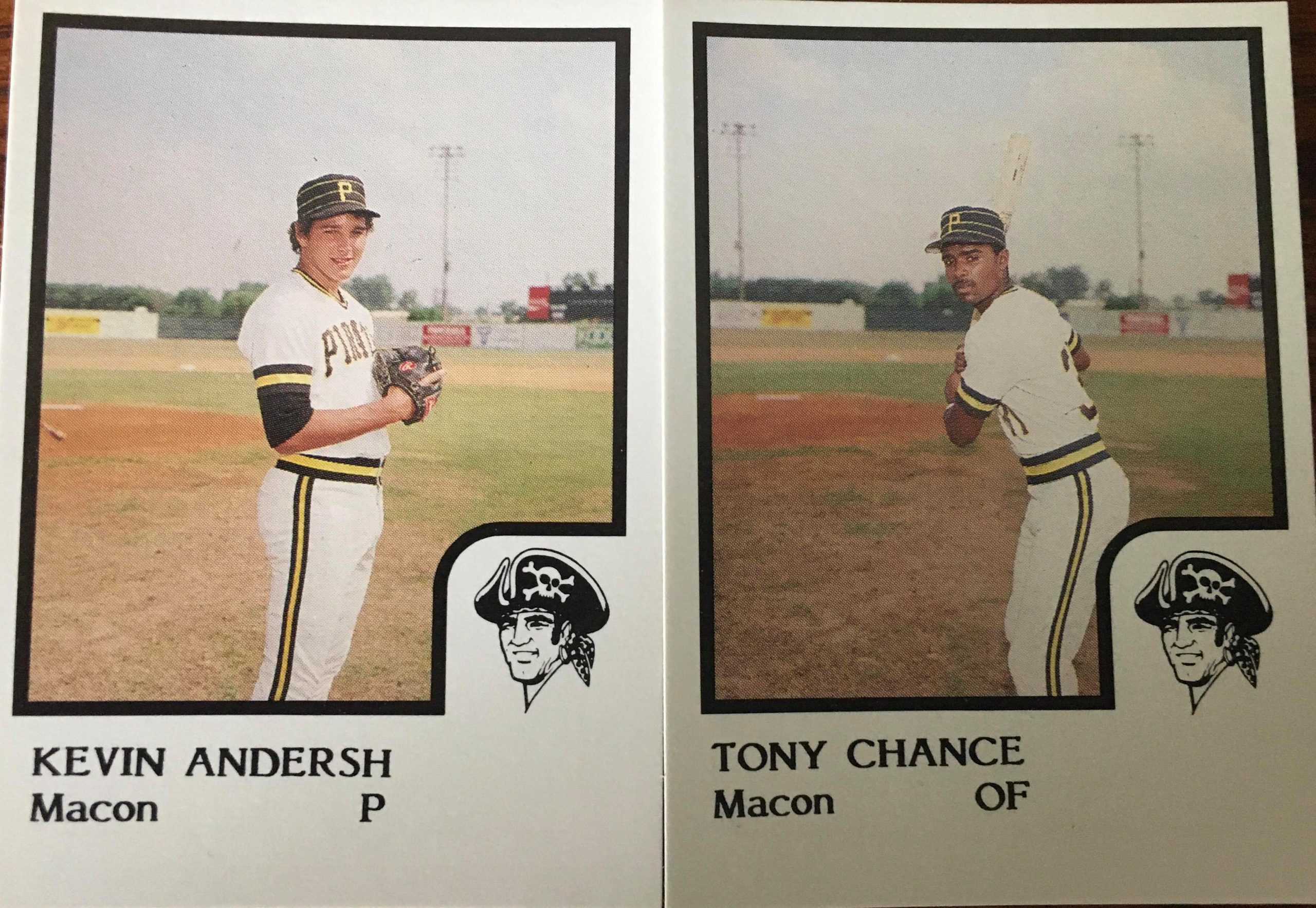 None of these minor league players are big name players, but these two would qualify as bigger than the rest. Kevin Andersh was the Pirates first round pick in the 1984 draft, selected 15th overall out of the University of New Mexico. He had 16 losses for Macon in 1986. His career was sidetracked by a rotator cuff injury. Andersh pitched just 22 times total during the 1987-89 seasons before retiring as a player.

Tony Chance played pro ball for 20 years and never made the majors. He began with the Pirates in 1983 and last played in independent ball in 2002. His father Bob Chance played parts of six seasons in the majors. The Pirates traded Chance in June of 1989 for big league pitcher Mike Smith, who lasted 16 games in Pittsburgh before being released. What’s very interesting here is his timing in 1986. He not only made the Macon set, but he was with Prince William during their photo day, so he’s in both 1986 sets.

The final group of cards are the “oddities” as we will call them. In the middle is the card of the trainer, which seems odd unless you collect minor league cards. Almost all of their sets included a trainer card. Brian Stackhouse joined the Pirates right out of college in 1986 and just two years later he had moved on to the Cleveland Indians organization.

I included the Kirk Barry card because it’s some of the worst centering for a picture. It’s almost as if they needed to get the mound and him in the same photo. My guess is either someone got into the photo wide right, or possibly he was doing something with his glove hand that they didn’t want in the set. Minor league players often tried to do something odd on their cards….

Andy Hall is here because….stop reading now and look at the photo, then come back. I’ll wait. Okay, so you may have seen his grip on the bat, which is obviously wrong. I also liked this card because of the gold batting helmet. Hall batted .195 for Macon in 1986, so maybe there wasn’t a little trickery being played here and that’s actually how he swung the bat. He played nine seasons in the minors and briefly made it up to Triple-A for the Pirates in 1989.

Here are the rest of the players in alphabetical order: