Many of you probably looked at that title and wondered what language that was written in. Jot Goar was a real player for the Pittsburgh Pirates, pitching for the team during the 1896 season. His timing was perfect to be included on a Cameo Pepsin pin, which are very rare and highly collectible. It’s a perfect subject for our sixth installment of Pittsburgh Pirates Memorabilia.

We’ve been featuring Pittsburgh Pirates items from baseball collectors who are willing to show off their item and tell a little story about it. You can find the first five in this link. Today’s submission is from Kevin Cummings, who specializes in 19th century items. This is the second article from him to be featured here. He first appeared here in one of our Card of the Day articles, showing off an 1887 Old Judge card of Pittsburgh infielder Sam Barkley.

Mr Cummings gives some background on Pepsin pins, while also telling the story of Jot Goar and how he ended up in Pittsburgh, as well as his career path after the 1896 season. Enjoy! 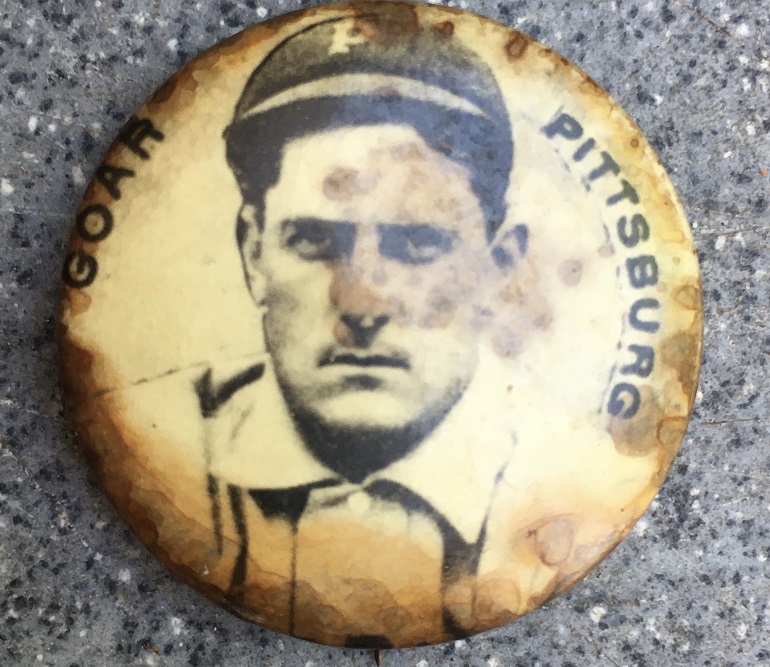 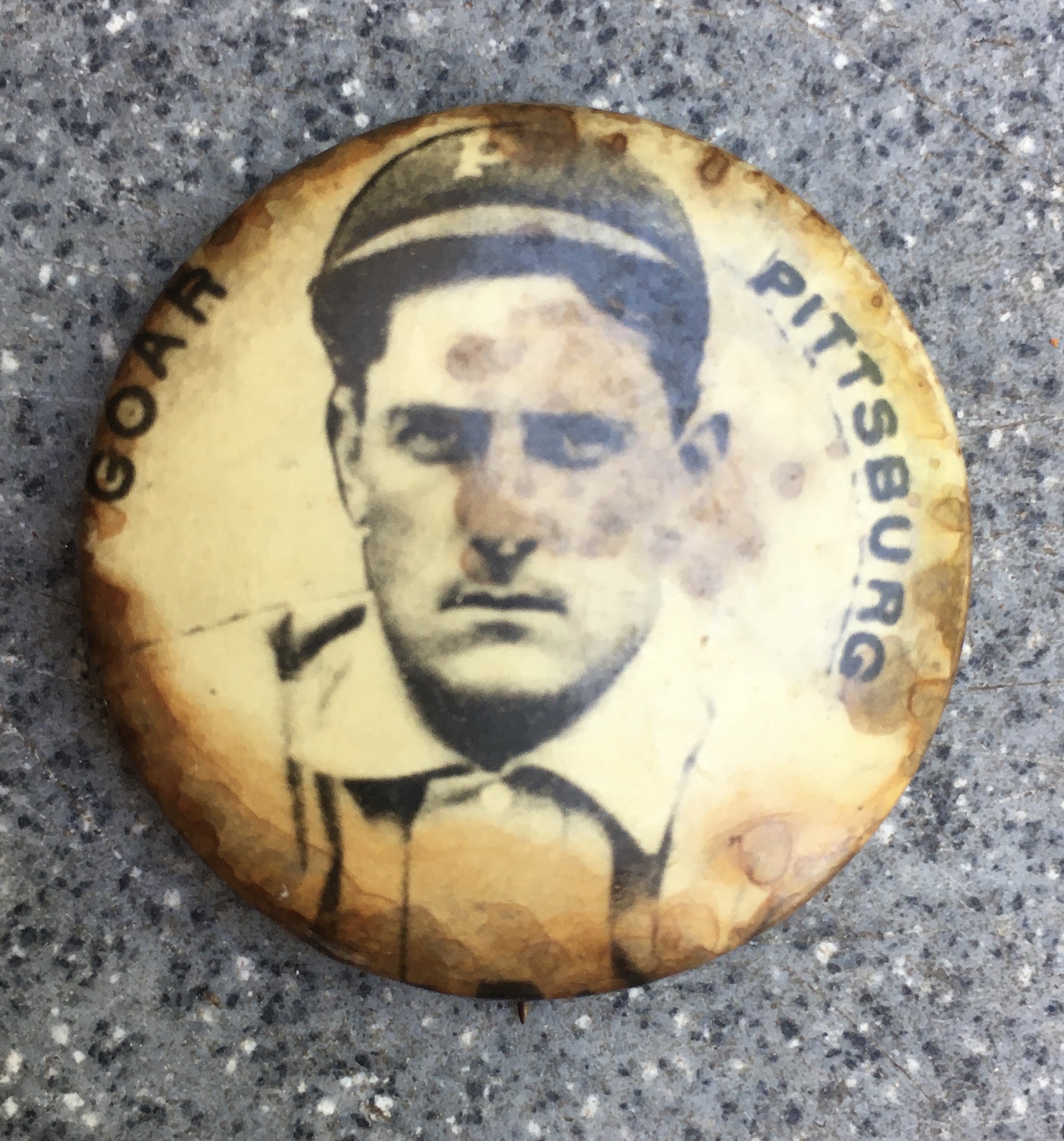 Cameo Pepsin Gum baseball pins filled the gaping void between the end of the Old Judge card set in 1890 and the beginning of the Breisch-Williams card set in 1907. This collectible was assigned the combined designation PE4 by Jefferson Burdick in his American Card Catalog as they were a pin issue (thus the P) distributed by a candy manufacturer (thus the E). The set consists of 144 subjects – players, managers, and teams from both the major and minor leagues – produced between 1896 and 1897.

The front of the player pins feature a celluloid-coated, sepia-toned picture of the subject along with his team and position. The rear of the 1¼ inch pin generally shows the Cameo Pepsin Gum product name in bold letters, a woman’s cameo portrait, as well as the product manufacturer’s name and the pin manufacturer’s name (Whitehead and Hoag) in small letters on a paper disk held in place by the circular pin body. Other non-Cameo product messages are also found on the paper disks. These items are ultra rare and very expensive when found. Interestingly, the subject of the following player article, Jot Goar, is the only player in the set shown with two different photos and two different teams – Pittsburgh and Indianapolis. 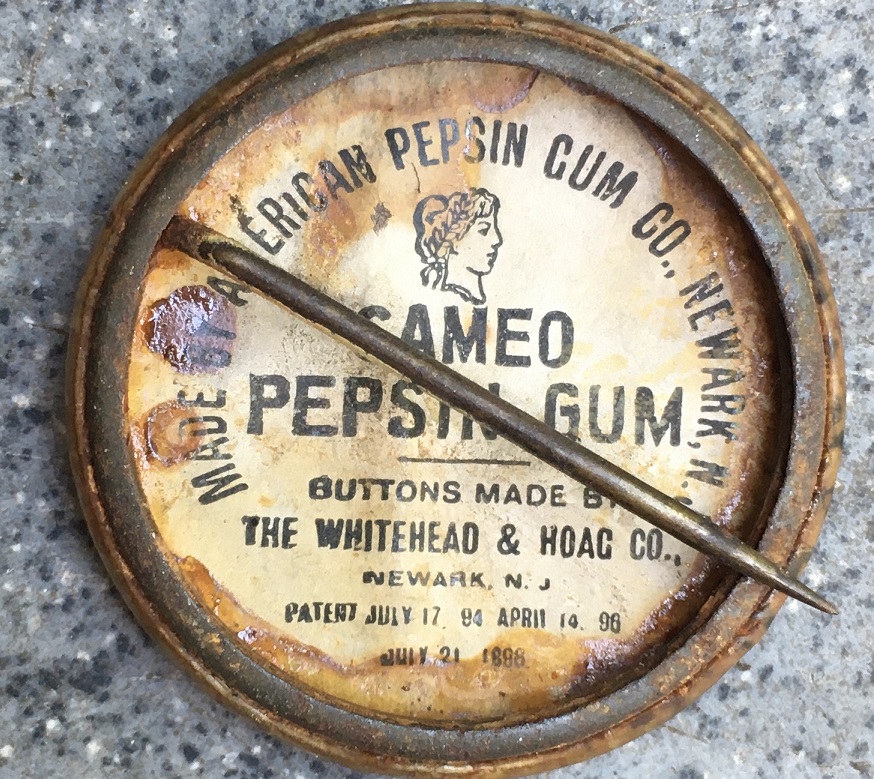 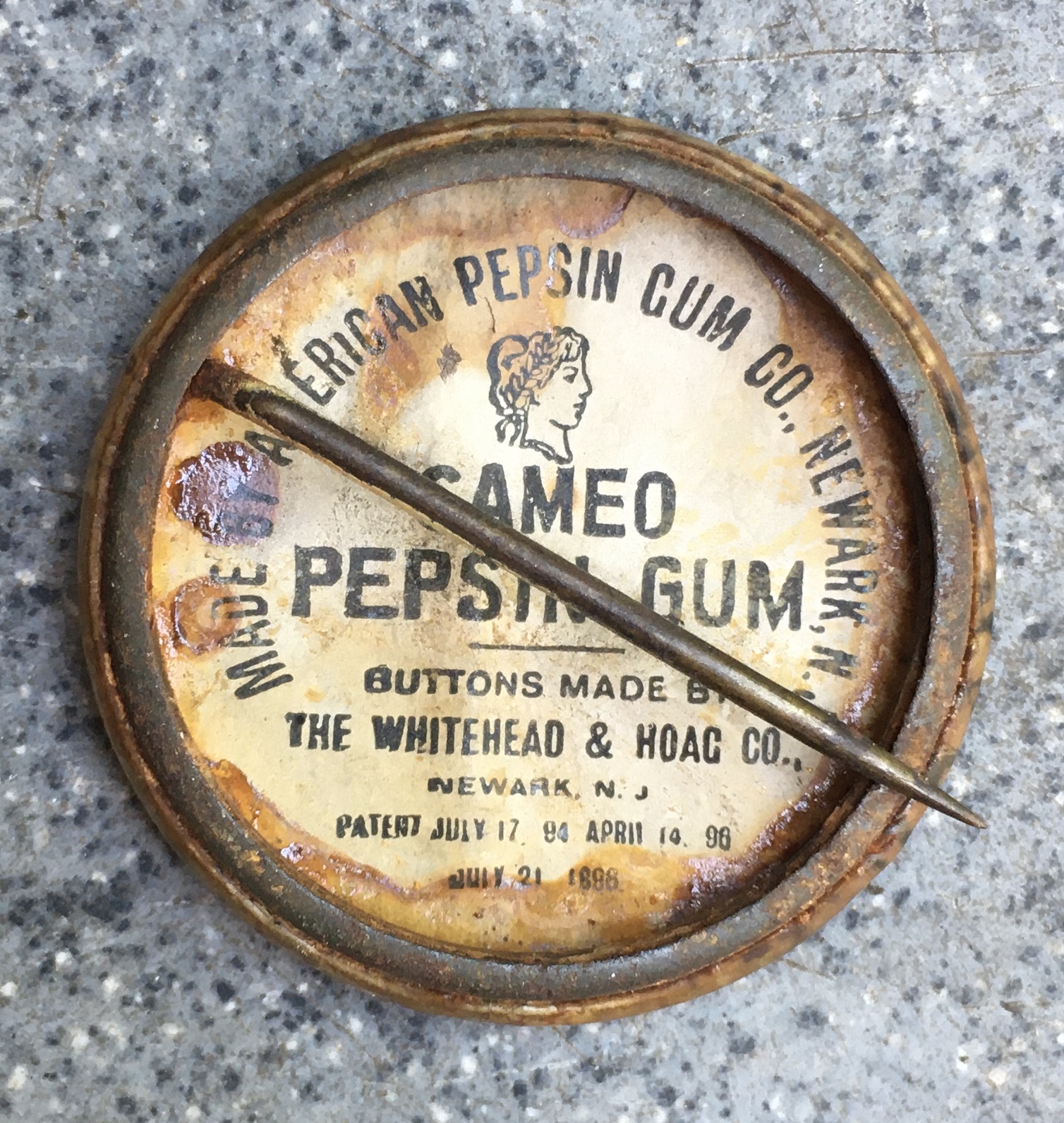 Joshua Mercer Goar, known colloquially as “Jot” (no one knows why), was born on January 31, 1870 in New Lisbon, Indiana. Goar inherited the family farm at a young age, but still found time to pitch on weekends for local independent teams. Late in the summer of 1892 he pitched for the Muncie team in an exhibition against the powerful Cincinnati team of the National League. Thanks to his ability to throw a curve ball (still a relative novelty at that point in baseball history), he fared well against the Reds, but future Hall of Famer Bid McPhee accurately predicted that Goar’s confusing, but jerky underhand delivery combined with the constant use of his favorite pitch would ruin his arm.

By 1895, Jot had turned pro himself and signed with Toledo of the Western League. Both he and the team had an up-and-down year, but his statistics (13 wins, 31 complete games, 3.38 ERA) were good enough for the major leagues to take notice. His contract was sold to Connie Mack’s Pittsburgh team for $1,750. His arrival in Pittsburgh generated much attention. In its May 2, 1896 issue, Sporting Life said, “Goar is regarded as one of Connie Mack’s most promising twirlers.” His time with the Alleghenys was, however, short and uneventful.

Connie Mack used Goar as a relief pitcher in order to get him acclimated with the rigors of the tougher competition. Thanks to poor performances in each of his three relief roles, though, he never earned the opportunity to start. His April 18th debut appearance against the Cincinnati went nowhere nearly as well as his previous effort against the Reds. Goar managed just 1 1/3 innings of poor work. As Sporting Life reported it, “Pittsburgh had things their way up to the seventh inning, when the home team found their batting eyes and knocked Foreman out of the box. Goar, who relieved him, fared no better. The locals tried three pitchers, all of whom were hit freely.”

Goar relieved Foreman again on May 2nd against the Baltimore Orioles. He fared even worse than his predecessor, yielding nine runs. On May 20th, Jot got what turned out to be his final chance, this time versus the Brooklyn Bridegrooms. As Sporting Life reported it, “Hastings started to pitch, but was wild and gave way to Goar at the end of the third inning. The latter was not much of an improvement.” Clearly an understatement for a pitcher who gave up 16 runs in a game that Sporting Life said, “…was little better than a farce…”. Thanks to this particularly weak effort, Goar wound up with the worst base runner per 9 innings ratio (29.7) of any 19th Century pitcher with a minimum of ten innings worked. Before the spring was done, manager Mack had “loaned” Goar to Grand Rapids and his tenure in Pittsburgh was over.

A stellar year (25 wins and a 1.39 ERA) in 1897 with Indianapolis in the Western League almost resurrected his major league career. Connie Mack was quoted in The Sporting News by saying, “Jot Goar is by long odds the greatest pitcher in the Western League.” After signing with the Cincinnati Reds for the 1898 season, however, he showed up at Spring Training with an injured wrist. His lone appearance for the Reds was a forgettable two innings of mop-up duty on May 1st against his old team, Pittsburgh, after which he asked for his release.

He did have one more fling with professional pitching fame – seven wins in 1900 for the Indianapolis Hoosiers – before the nagging wrist injury forced him into retirement. He continued to pitch with local semipro teams while tending to his grocery store and farm, as well as being the postmaster of the local office. He died in New Castle, Indiana on April 4, 1947 at 77 years of age.