Pete Castiglione spent the majority of his eight-year big league career with the Pittsburgh Pirates. He debuted in the majors with them as a 26-year-old in 1947, and he was around until the middle of the 1953 season, when the Pirates traded him away to the St Louis Cardinals. Despite spending parts of seven seasons in Pittsburgh, he’s not a name that comes up often in team history, making him perfect for an Obscure Pittsburgh Pirates article.

Castiglione was with the Pirates in 1940 as a 19-year-old in the lowest levels of the minors. He was around for three years, working his way up to Class B level, which would be similar to High-A ball now. He batted .265 in 123 games with Harrisburg of the Interstate League in 1942. Castiglione was quite the singles hitter in those early years, failing to collect a single home run in three seasons.

Like many young players during this time, Castiglione joined the war effort, spending the 1943-45 seasons with the US Navy. He rejoined the Pirates in 1946 and returned to Class B, this time showing a lot of improvements at the plate. He batted .342 in 143 games for the Selma Cloverleafs of the Southeastern League. Castiglione showed some power at the plate as well, collecting 57 extra-base hits, including his first eight home runs as a pro.

In 1947, he moved up to Triple-A Indianapolis, which was an affiliate of the Pirates back then, long before they rejoined the Pirates in 2005 after a 54-year stretch with other teams. Castiglione hit .270 in 146 games, with 26 doubles, nine triples, two homers and 74 runs scored. That September, the Pirates called him up to the majors for the first time. He debuted on September 10th, starting at shortstop and batting second at Forbes Field in a 3-2 loss to the New York Giants.

Castiglione held his own at the plate, though the Pirates saw the singles hitter side of his game. In 13 games, including 12 starts at shortstop, he batted .280 with six runs scored and an RBI. He committed two errors in 67 total chances. All 14 of his hits were singles.

Despite mild success in September and a strong stats at Indianapolis in 1948, Castiglione was limited to four late-season games off of the bench for the Pirates in his second big league season. He hit .308/.355/.446 in 148 games at Triple-A, with 33 doubles, 16 triples, five homers and 87 runs scored. The Pirates used him twice as a pinch-hitter and twice as a pinch-runner, with one defensive game at shortstop for one inning.

You wouldn’t think that the limited use at age 27 would be a good sign, but Castiglione remained in the big leagues from that point on with the Pirates. In 1949, he started 108 games, despite spending the first eight games of the season on the bench. He got his first chance to start on April 28th and he collected three hits. That was followed the next day by two hits and two RBIs, then three hits and three RBIs on April 30th. That early success opened up the door for him briefly.

After some slow games in early May, he went 16 days without making another start. In a case of deja vu, he got a start on May 25th and had three straight multi-hit games, which included his first home run. Castiglione moved to third base in early June and he was an everyday starter the rest of the way. He batted .268/.299/.362 over 118 games in his first full season in the majors.

Going into 1950, Castiglione was back on the bench. The Pirates gave time to a lot of infielders that year and Castiglione eventually got his share after not starting any of the first ten games. He was mostly at shortstop through the end of May, then mainly played third base until September. His last start of the season was on August 27th, spending the final 32 games on the bench. He played in 12 of those games, ten as a pinch-hitter and two as a late innings defensive replacement. Castiglione hit .255/.317/.350 in 94 games, 57 as a starter.

The Pirates had an odd habit of starting Castiglione on the bench, as the pattern started to show in 1951. He was on the bench for the first eight games again, then took over third base for most of the remaining games. He also made the most of his first start again, this time collecting four hits on April 28th. He had five multi-hit games in his first six starts.

On August 26th, Castiglione had a career day at Ebbetts Field, smacking two home runs off of Don Newcombe. He scored three runs and drove in three in the 12-11 victory. He had just one more game in his career with two homers, coming on May 1, 1953. His second home run that day was his last big league homer.

In 1952, Castiglione played just 67 games, but his .697 OPS was a career high. He wasn’t benched this season. Instead it ended on a crazy play on July 22nd. Batting with two men on in the ninth and two outs, he was hit by a pitch that broke his arm just above the elbow. The ball rolled towards first base and the Phillies threw to first for what was called the final out. The umpire said that the ball hit his bat first, but it didn’t according to reports. Castiglione was down on the ground in pain while the Pirates argued the bad call. They initially believed that he would miss a month of action, but he never returned that year.

Castiglione had the starting third base job in 1953. However, his bat never came around. He was benched briefly in May after a .194 average through 33 games. He started again in June and only got that mark up to .208 two weeks later before the Pirates decided to ship him off to St Louis for veteran outfielder Hal Rice and cash. Castiglione batted .173 in 67 games that season with the Cardinals, then lasted five games in 1954. All five games were as a late inning defensive replacement at third base. The Cardinals used him in a similar role in 1953, giving him 51 games at third base without a start. He was backing up third baseman Ray Jablonski, a 26-year-old rookie who drove in 112 runs in 1953 and 104 runs in 1954, while posting -1.7 dWAR. 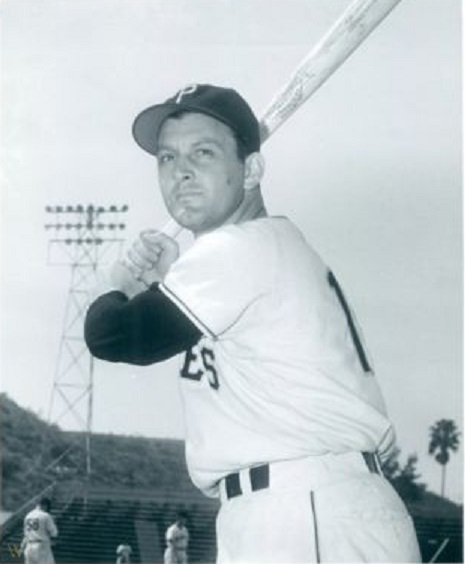