One of the greatest Pittsburgh Pirates players of all-time hasn’t been featured in a Card of the Day article yet and it’s time to do something about that injustice. Paul Waner didn’t have a ton of cards produced during his career because there weren’t a lot of cards being produced during that era. His most popular card just might be his 1933 Goudey card, which is relatively easy to find, but can still go for a lot of money in higher grades.

The 1933 Goudey set features 240 cards and it is loaded with Hall of Fame cards, including four cards of Babe Ruth. It’s also known now for what they didn’t include in 1933. Card #106 was a chase card of the great Nap Lajoie, which wasn’t printed until the next year, so people were unable to complete the set. That got them some negative press back then, so they would sent the Lajoie card to people who wrote the company for one. Not many people actually wrote them, so the Lajoie card remains much tougher to find than any of card in the set. The entire set is popular now with collectors because most of the cards are readily available and it offers affordable ways to get cards of Hall of Fame players.

Despite the Lajoie mess, Goudey hit big with their first baseball issue, including cards with their sticks of gum. For one penny, the buyer got one card and one large piece of gum. Card #25 in the set featured Pirates right fielder Paul Waner.

In 1932, Waner batted .341 and set a Pittsburgh Pirates team record with 62 doubles. That’s the fifth highest doubles total in Major League history. The 30-year-old Waner would bat .309 during the 1933 season, with an impressive 60:20 BB/SO ratio in 694 plate appearances. 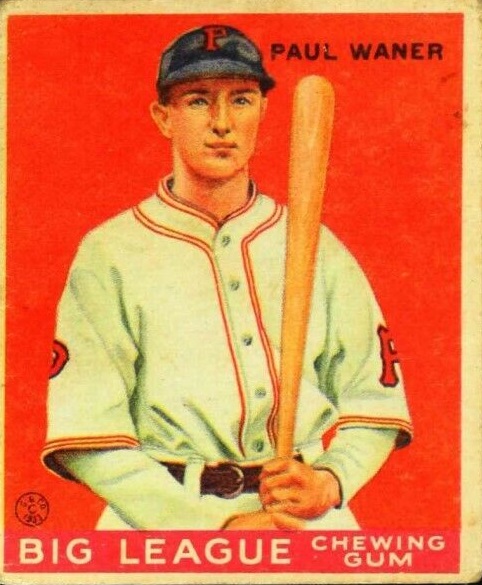 Waner’s card has that bright red background, which looks great with the old style Pittsburgh Pirates uniform. You can pick up this cards for $50 in low grade (ungraded), but acceptable condition. Once you get into the graded cards in nicer condition, the price can quickly get into four figures. A PSA 8 (which would be considered near mint/mint condition) recently sold for $17,400. 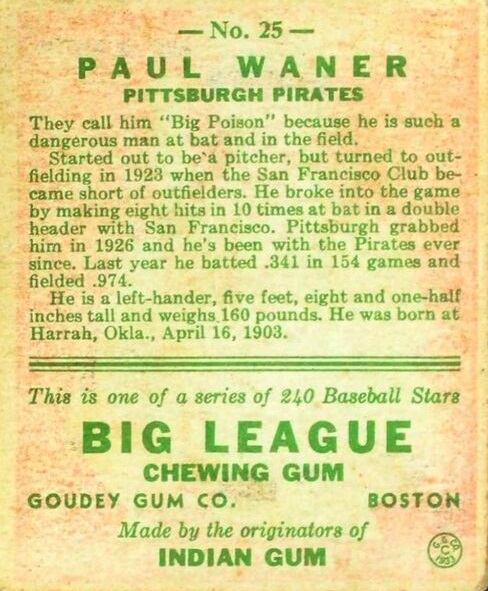 The back has some great details about Waner’s career, plus bio information such as his height/weight, birthplace and birth date, along with the fact that he was a left-handed hitter. You also see the large advertisement for Goudey’s Big League Chewing Gum.

The odd thing missing from the back is the fact that his brother isn’t mentioned. If you look at the back of the Lloyd Waner card, the first thing mentioned is that he is Paul’s brother. This card notes the “Big Poison” nickname, while Lloyd’s card makes no mention of the “Little Poison” nickname.