On June 8, 1903, the Pittsburgh Pirates were hosting the Philadelphia Phillies at Exposition Park. The Pirates had an impressive shutout streak on the line and their great shortstop Honus Wagner came up big to keep that streak intact with a game-saving catch.

After losing 10-2 to the New York Giants on June 1st, the 1903 Pirates made a run that helped them to their third straight National League title, which was followed by an appearance in the first modern day World Series that October. On June 2nd, the Pirates exacted some revenge for the previous day’s loss with a 7-0 victory over the Giants. Pittsburgh took the three-game series over New York with a 5-0 win the next day. That brought in the Boston Beaneaters, who would leave town after three days without scoring a run. The Pirates swept that series, outscoring Boston 18-0 in three games.

Philadelphia was next in town and they had a 12-28 record coming into the series. The Pirates won three of four games during a set in Philadelphia in May. The great Sam Leever was on the mound for the Pirates on Monday, June 8th, coming off of the 5-0 victory against the Giants five days earlier. He out-dueled Hall of Fame pitcher Joe McGinnity in that contest.

The Pirates got on the board in the bottom of the first inning with a run. That would be all that they would need on this day, though they added a run for good measure in the fourth inning. Sam Leever was on his game this day, which is how most of the 1903 season went. He was well on his way to a 25-7 record by the end of the season.

Leever scattered eight hits throughout the contest and walked just one batter. He wasn’t blowing away the Phillies hitters, picking up one strikeout in the entire game. Leever cruised through eight innings, then ran into some real trouble in the ninth. Shad Barry singled to left field to start the inning. Rudy Hulswitt flew out to center field for the first out. That was followed by a single to right field by Kid Gleason, who some of you might know as the manager of the 1919 Black Sox. Philadelphia had the tying run on first base with one out in the ninth, though the bottom of the lineup was now up.

Rookie catcher Frank Roth came up as the winning run. I’ll note that there wasn’t much chance of him hitting a home run, as he hit just one homer in six big league seasons. He grounded out to Leever for the second out. That put both runners in scoring position for the pitcher’s spot in the order. The Phillies sent in veteran William “Klondike” Douglass to pinch-hit. He was another non-power threat, as were most batters during this era due to the baseballs being used, but Douglass only needed a single to tie the score.

Leever threw Douglass one of his patented curveballs and Klondike lined the ball towards the left-center gap. However, Honus Wagner was playing a deep shortstop at the time and he timed his jump just perfectly to snare the liner in his outstretched glove for the final out of the game. The headline the next day in the Pittsburgh Press read: “Wagner’s sensational catch saves the day for the locals”.

Another note in the paper said that the Phillies were unlucky because Wagner was the only shortstop in the world who could have caught that ball. That’s a little tough to be sure of, and very unlikely to be true, but Wagner did help himself by moving back before the pitch, so his positioning was key to making the play.

Wagner’s catch not only saved the game, but it extended the shutout streak to six games, which still stands as a Major League record to this day. He was also a key contributor at the plate with two hits and he scored the second run of the game. Wagner wasn’t alone in the defensive highlights. Second baseman Claude Ritchey was also credited with robbing two base hits. Jimmy Sebring had two hits, including the only extra-base hit of the game (double). He was less than four months away from forever etching his name into baseball history with the first World Series home run.

The Pirates would lose their shutout streak the next day, but that was all they lost for quite some time. They won 15 straight games, going from 4.5 games back in the standings, to 2.5 games ahead of the New York Giants over a 24-day stretch.

Here’s the boxscore, which shows Hall of Fame outfielder/manager Fred Clarke going 1-for-4 while batting second. It also has a third Hall of Famer listed, umpire Hank O’Day, who pitched for the Pirates back when they were still in the American Association. 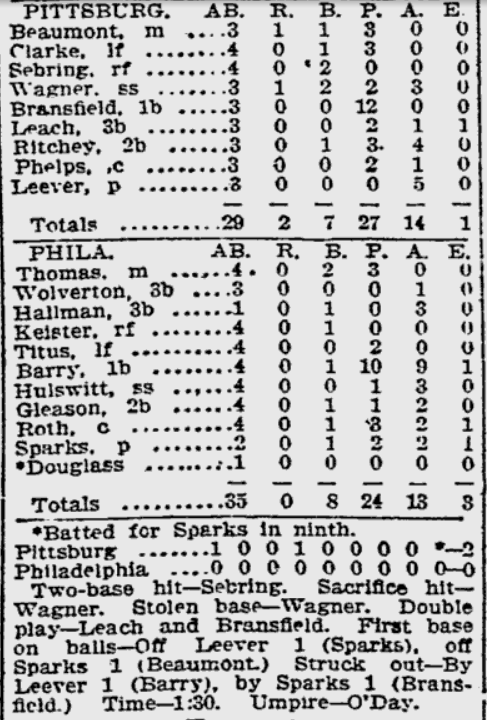 Here are links to the previous Game Rewind articles: